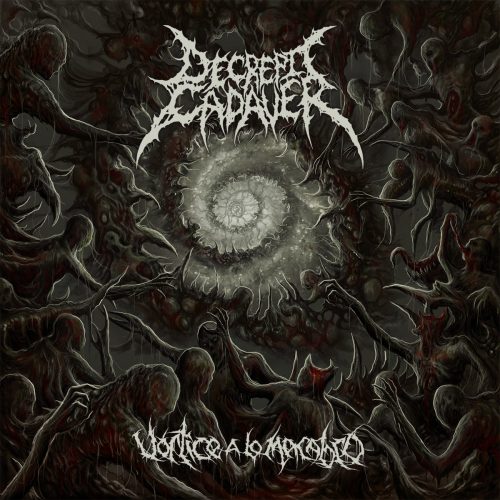 (Our old friend from the Dominican Republic and connoisseur of brutal death metal, Vonlughlio, brings us this concise review of the concise new third album by the Chilean band Decrepit Cadaver.)

I first heard about this Chilean BDM band thanks to Force Fed and Rotten Cemetery Records, the two labels that co- released their latest album Vórtice a lo Macabro.  The band was founded back in 2002 by Jorge “Cadaver” Reynaud and a friend who was the drummer at the time. They have released a demo, an EP, a four-way split, and three full-lengths since their inception.

After getting familiar with their discography I decided to get their new album, and I must say that it’s their best work to date.

One thing that I did not like at first was the length of this release, which is below 25 minutes, because this band has released great quality BDM, and their previous release (which I enjoyed a lot) was above 30 minutes. But after listening to the whole thing, and understanding how the songs are structured and how the vocal patterns are established, the length now makes sense.

I do really like how the songs are structured, as well as the overall production, in which the drums, guitars, bass, and voice are all distinctive and not overshadowing each other. The riffs are well thought-out and show diversity, the drums are sharply executed, and the vocals fit the music perfectly. All the lyrics are in Spanish, and I must admit that’s a plus for me.

In addition to the music, the themes displayed in this album are well-conceived and tasteful.  When you start listening, look at the order of the songs and read the lyrics, if you can; you will see how they took their time to tell a story of flesh corruptions, putrefied torsos, divinity profaned…  just to name a few.

Here is their tracklist:

For sure, this release has become one of my favorite BDM records of 2017, and I hope they continue to create music and themes like those they crafted for Vórtice a lo Macabro. If you also enjoy what you hear you can purchase this album via Force Fed or Rotten Cemetery.