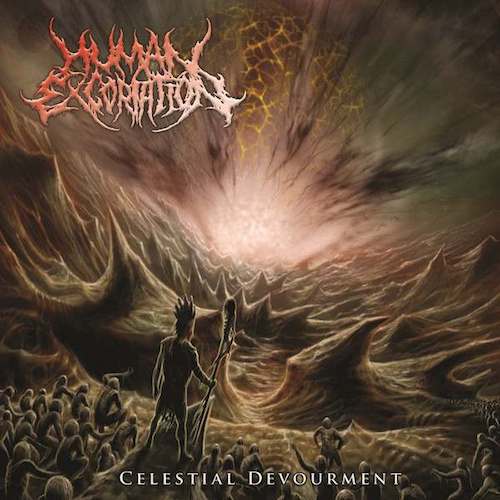 (Our friend from the Dominican Republic, Vonlughlio, who loves brutal death metal more than food, prepared this review of the first album in a decade by Human Excoriation.)

So today I wanted to do a small write-up about a band whose music I was familiar with only through a couple of songs from their first album. The band is the US BDM act Human Excoriation, and this past June they released their sophomore effort entitled Celestial Devourment via Pathologically Explicit Recordings.   The fact that this label released the album and that Justin Downs (Purulent Necrosis, Vituperate, Scatology Secretion) was in charge of vocals, peaked my interest in this project.

The band was formed back in 2006 by Travis Cook and Nate Turpin after Methadone Abortion Clinic. The purpose of this new project was to remove the skin of humanity, and with the release of their 2007 debut album Virulent Infestation you can witness that. It has all the BDM standards (lyrics and all) and it has become among my favorite debuts. 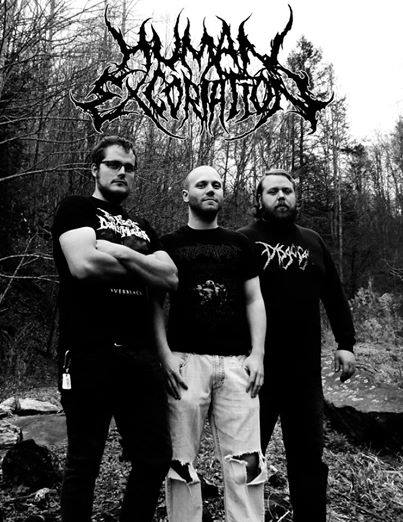 After that release the band went into hiatus, and I believe it was at the beginning of 2017 that the label announced it would release their new effort. In that time, as I’ve mention, it was also stated that Mr. Downs would be on vocals, and to say I was excited would be an understatement. The man is a fucking beast of a frontman.

Once the album was released, and from the first time listening, I could sense that the band had evolved in how the songs were written, in the riffs, in the drums, and in the vocal patterns. The first release I felt was straight BDM, and now (although the album is still BDM) you can hear some technicality in the riffs in specific parts of the songs. I surely enjoyed that and believe that it adds much depth and uniqueness to the songs, which as a whole tell a story of skinning humanity in the hope of something better.

The guitars and bass were handled by the founder Mr. Cook, and I salute you, good Sir. You have created an album that with each listen I grow more fond of. The drums are relentless and executed with precision, the guitar and bass are heavy and technical, and the music has feeling to it (if that makes sense). And to top it all off, them fucking vocals, hot damn!!!!! Mr. Downs is definitely on top of his game. He is one growler machine that never stops!!!!! The ways in which he handles his vocals on each of the songs are just perfect.

This release really does get better and better with each listen, and I hold it very dear. It came out at the right moment and I haven’t stop listening to it. I make it a point to find time in each week to listen to it at least once. So, dear reader, if you made it this far through my words, and you like BDM or some BDM, please check them out and give this band a listen and support if you can.