(Last summer we premiered a song from the new album by Planet Eater from Regina in the Canadian province of Saskatchewan, and now we present Andy Synn’s review of the album.)

As much as we enjoy a lot of fancy progressive, forward-thinking, paradigm-evolving bands here at NCS… sometimes we all just want something that rips. 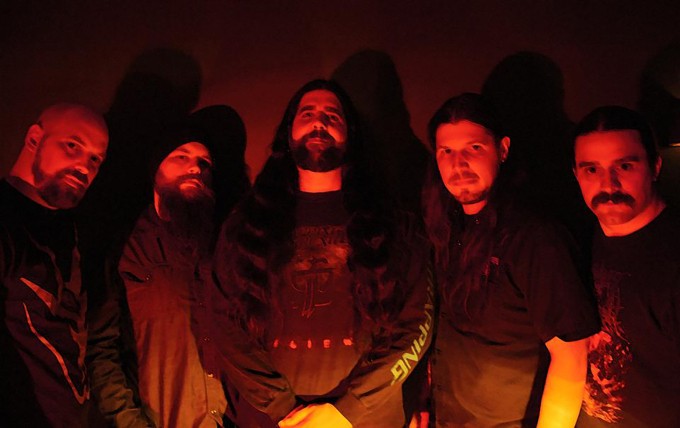 Opener “The Boats” immediately hits you right between the eyes with a sense of groove potent enough to cause involuntary priapism (consult your doctor if the condition persists for more than six hours) and a plethora of heavy-as-hell riffs so irresistible that Steven Hawking himself would have trouble not headbanging along, while “Pile of Bones” picks up the pace in a suitably ferocious display of thrashy rhythms and chunky Death Metal riffage, with the hyper-aggressive vocals of frontman Donovon Turner (reminiscent of Man Must Die’s Joe McGlynn) adding some extra-nasty icing to what is already a pretty crushing cake.

The group’s Gojira influence is stronger than ever on both “Cold Confines” and “Lies Evolution”, with the former employing a similar sense of moody melody and pulsing, organic rhythms, while the latter goes for a more mechanical, ground and pound, approach, but Planet Eater are careful to inject each track with more than enough of their own character and pissed-off personality to pre-empt any accusations of plagiarism.

Although “Kill On Sight” is probably the album’s most intensely aggressive number – which is saying something, considering how visceral and vituperative Blackness from the Stars is overall – channelling some of the lunatic fury of Strapping Young Lad over the course of just under three minutes of pure metallic punishment, it’s quite possible that “A Fault to Fix” is the album’s heaviest cut, delivering an adrenaline shot of weaponised Death Metal riffage so weighty it’s in danger of caving in your chest cavity, while also incorporating some surprisingly melodic touches that, if anything, only add to the track’s dense atmosphere.

Penultimate pounder “The Spoil” goes heavier on the groovier side of things, dredging up some Crowbar-esque sludge to accentuate the band’s already humongous sense of grinding groove, some of which carries over into the album’s climactic title-track, “Blackness from the Stars”, which is probably the darkest number on the entire album, the group layering a wealth of dissonant and desolately melodic guitar lines together into one multi-level monstrosity of a closing statement.

Heavy as a very heavy thing indeed, this is an album designed to chew bubblegum and kick ass… and it is most definitely all out of bubblegum.

2 Responses to “PLANET EATER: “BLACKNESS FROM THE STARS””