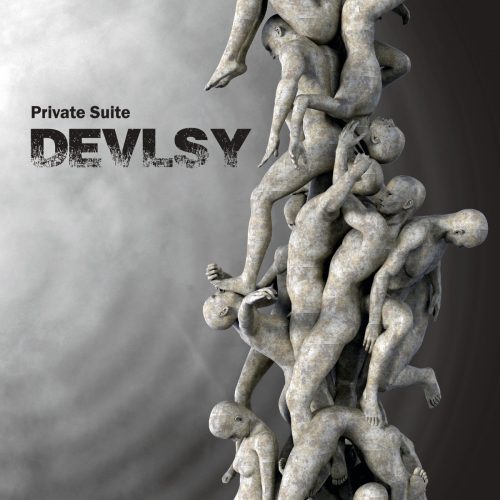 “Post-Black Metal” is a particularly amorphous genre term, one that has been applied to everything from Alcest to Enslaved, from Sólstafir to Wolves In the Throne Room, from Oranssi Pazuzu to Harakiri For the Sky, from Altar of Plagues to Deafheaven. With such an expansive palette of sounds arguably encompassed by the term, it can leave a lot to the imagination, though a re-imagining of the boundaries of black metal may itself be the very core of the concept. Which brings us to the Lithuanian band DEVLSY and their forthcoming second album Private Suite.

It is a provocative and adventurous six-track affair, a compact 35 minutes of music that will be released by ATMF on November 3, but which we have the pleasure of presenting in a full stream today. 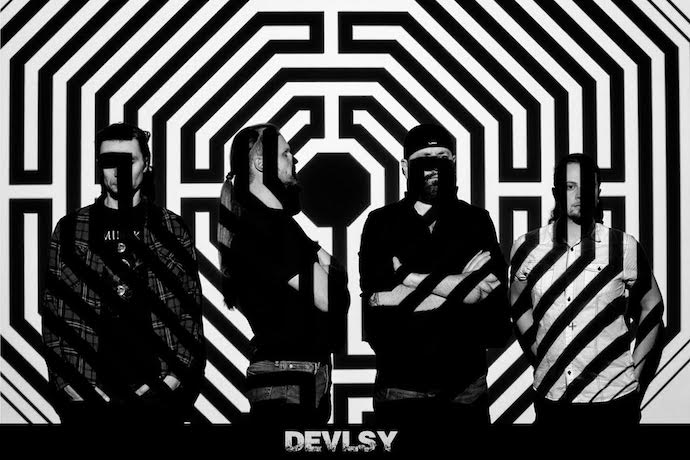 As the band’s name might suggest, Private Suite is a diabolically creative excursion, one that’s persistently unsettling but equally enthralling. Its atmosphere is often gothic and gloomy, with a haunted and sometimes hallucinogenic quality. The music builds tension in different ways, sometimes feverish in the manner of an anguished mind beginning to come apart at the seams, sometimes oppressively grim and ominous, and sometimes so throat-constricting in its intensity that it threatens to cut off your air supply. The music can be slow, spare, and desolate, and it also surges like the tumult of a storm.

Black metal is certainly a key ingredient, but you can’t really say it’s a dominant one. Blast-beat eruptions and the slash and swarm of abrasive tremolo’d riffs are used judiciously, as merely one texture in the music — one means of ratcheting the tension, but far from the only one. And while scalding shrieks might be more present in the collage of vocals that appear across the album than other expressions, ghastly whispers, dry, heartless roars, spectral wails, and even vaulting clean vocals contribute to the changing moods (and Dave Edwardson of Neurosis lends his own voice to perhaps the most consistently intense track on the album, “Bring My Word”).

The creative dynamism of the song-writing is a clear strength of the album, as are the ways in which the band create ebbing and flowing energies and contrasts between a spareness of sound and a layering of textures, but equal care as been devoted to the production.

The sound, for the most part, has clarity and distinct separation of the instruments in the mix. But the tonal qualities of what you hear are quite different. The bass — which is a vital and prominent ingredient in this music — is massive, craggy, sludgy in its distortion. It sounds like an excavating machine crushing rock inside your head. And there is an element of abrasion in some of the guitar work as well. But the lead guitar notes and melodies have an almost crystalline, ringing clarity. Their reverberation gives the music an eerie and almost dreamlike quality.

While the drummer rarely resorts to double-bass rumble or blast-beat fusillades, the drumming is undeniably an enormous part of the album’s appeal — and the sound is tremendously hard-hitting and physically arresting, even in the slowest booming and tumbling progressions. There isn’t much joy (or any) to be found in the emotional resonance of this bleak, haunting music, but there’s head-moving physical power to be found in abundance, and the drumming is a big part of that.

And so, in DEVLSY’s particular brand of post-black metal you can pick out ingredients of doom, shoegaze, post-rock, and gothic gloom along with black metal, of course. It’s a distinctive stylistic blend, and one that has a gripping effect. Unsettling music, to be sure, but it really stays with you.

Enjoy the full album stream below, and visit Bandcamp to pre-order.

2 Responses to “AN NCS ALBUM PREMIERE (AND A REVIEW): DEVLSY — “PRIVATE SUITE””