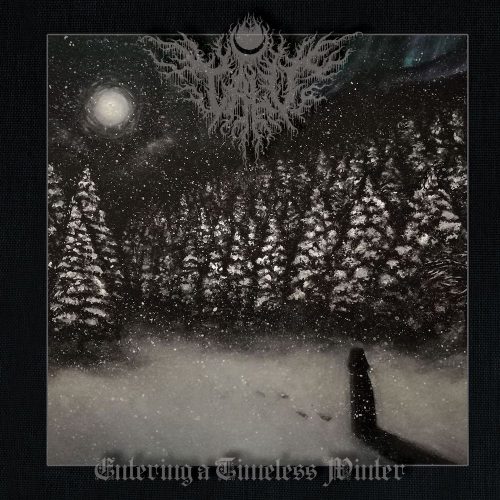 The Italian one-man black metal project Talv makes no secret about the atmosphere created by the new third album that’s set for release on November 3 by A Sad Sadness Song (a sub-label of ATMF). It is clearly displayed in the cover art, in the album’s title — Entering A Timeless Winter — and in the names of the songs (“Dreaming A Funeral In Another Life”, “A Sad Moon Concealed By Pines”, and Sidereal Hypothermia”), as well as in Tarv’s decision to end the album with an ethereal ambient-music cover of a song (“Winterreise”) by Coldworld.

In short, this is a bleak and wintry form of musical sorcery, and to hear it is to slowly drown in a vast and rising lake of tears, one that’s frigid enough to slow the blood, cloud the emotions, and carry the mind away to places we might not often visit. 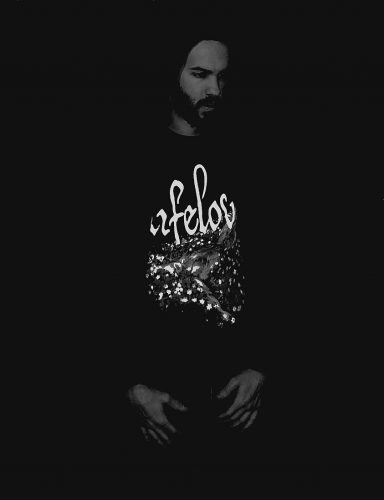 Where your mind might take you under the guidance of these sounds is unpredictable. We all have our own dark recesses where we try to lock away memories of longing, loss, and grief, but what hibernates there is unique to each of us. This music leads the listener by the hand to those rooms, opens the locks, brings those memories of bereavement, isolation, and fear back to life.

It is simple enough to describe the musical ingredients that have gone into these long sonic spells, though they produce a mental and emotional impact that’s far greater than the mere sum of these parts. Indeed, the first minutes of the first song introduce the listener to most of those elements — a persistent haze of guitar abrasion; the slow, ritual boom of drums and clash of cymbals, which sound distant at first but swell in volume, becoming a cataclysmically heavy funeral march; grief-stricken melodies that rise and fall in slow looping waves across the solemn crush and pound of the drums; and emotionally scarring shrieks of excruciating pain (the vocals are not ever-present, but when they appear they are always mind-fracturing in their harshness and wrenching intensity).

Across the course of the album, Tarv applies additional layers of sound to these fundamental patterns and strategies. New strains of melody come in over the ones that form the cores of the songs, sometimes carried by tones that might bring to mind the slow, aching reverberation of strings (as in “Sidereal Hypothermia”) or the long moaning peal of massed horns (as in “Dreaming A Funeral In Another Life”). They give these haunting excursions an even more supernatural aura. At times you may feel in the presence of death; at others, as in the second track, they add a sense a chilling beauty, much like the pale luminescence of the moon in the song’s title, gleaming through a forested shroud of darkness, or the slow fall of snow from night skies stripped of stars.

The songs rely on repetition, and they become hypnotic, providing vast immersions in loneliness, grief, and pain, while providing glimpses of fragile beauty and haunting majesty. Their emotional intensity is too great for them to be called meditative, yet they are still beguiling, in a way that guides the mind to dark places, yet without dictating what will be found there.

Look for the album on November 3… it provides a fitting portal to the onset of winter.

2 Responses to “AN NCS ALBUM PREMIERE (AND A REVIEW): TALV — “ENTERING A TIMELESS WINTER””