Most of us search for beauty in life, dream of it, grasp it when we find it, hold onto it as long as we can. But the horrors of existence always intrude, whether in the form of the daily abominations practiced by some people against others or from the incurable fear that nothing we cherish will last and that nothing awaits us at the end of our lives but the yawning void of mere extinction. And in time, all human life will also end in ashes, without a trace, a converging of all striving in death. Against the depths of such terrors, tales of goblins and vampires, ghosts and golems, seem like child’s play.

In every form of art, people have been driven to give some shape to our deepest fears and most paralyzing disillusionments, to express implacable dread or the conviction that humanity itself is a disease that will ultimately eat itself, while also devouring everything around it. And the results of such efforts can be very uncomfortable to witness and experience. Given the nature of the drives that inspire such efforts, how could they not be?

Which brings me to the title track of Nekrasov’s new album, The Mirror Void, which we’re premiering today. 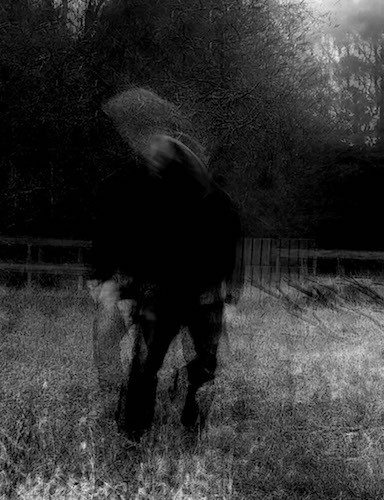 I don’t want to presume too much about what inspired this track, or about the inner workings of the mind that produced it. Maybe the horror I feel it summoning says more about my own state of mind than his. But it is unquestionably uncomfortable, nightmarish, shudderingly evocative, and intensely gripping.

The album as a whole is a multifaceted experience — about which I still intend to write much more. For example, the first track that premiered, “Whatever Pleases You, Keeps You Back”, has a hugely compelling drive and a trance-inducing, astral melodic current, as if the spheres in the void are singing to us as we hurtle toward their embrace. Yet there is violence in the music as well, the kind of harrowing sonic abrasion and vocal scarification that wounds… or reveals wounds.

“The Mirror Void“, on the other hand, is devoid of rhythm and it pushes the sensations of violence, chaos, and pure horror to the brink. It is a massive, thundering, cacophonous maelstrom of fury. There are patterns that emerge in this avalanche of dense and destructive noise — slight pauses as preludes to titanic detonations; shrieking tones that spear the mind; the pulsating and warbling vibrations of what sound like alien transmissions from deep space. There may be voices in this cyclone of catastrophe — distorted, horrific roars; cauterizing screams — or those sounds might just be other manifestations of the devouring void, which this track channels with frightening power.

The Mirror Void is the seventh album by this cult Australian creator, and the first to be released by Prosthetic Records, which was also wise enough to reissue the same creator’s Triumph of Gloom album in his very different musical guise as Rebel Wizard. The Mirror Void will be released on November 10th on CD, LP, and digital formats. You’ll find a pre-order link below.

Two other tracks from The Mirror Void have previously been released for listening — “Fragmentation and the rapid quicksand of concept” and “Whatever pleases you keeps you back” — and I’ve included the Bandcamp streams of those below our premiere of the title track.

One Response to “AN NCS PREMIERE: NEKRASOV — “THE MIRROR VOID””