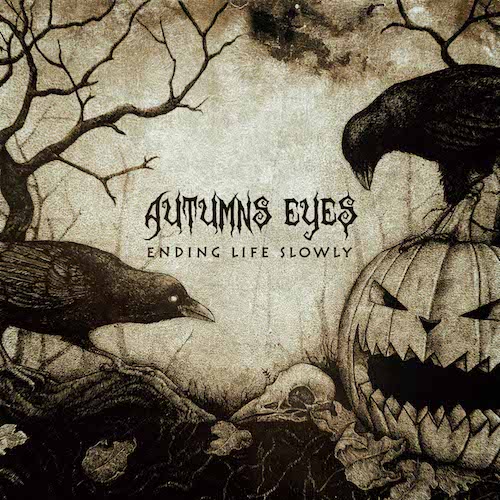 Ending Life Slowly is the eighth album by Connecticut-based Autumns Eyes, the solo project of Daniel Mitchell. Fittingly, it’s due for release on Halloween, when those of us in the northern hemisphere will find the door to the dead of winter opened by ghouls and goblins. Yet although Mitchell has frequently found inspiration from the changing colors and supernatural hauntings of late October, the new album was more inspired by what comes after. In Mitchell’s words:

“Living in New England has always made it easy to draw from the month of October for creative inspiration, with life breathing its flaming colors into all the surrounding trees. Unfortunately, these themes can only be revisited every so often before it becomes repetitive. That’s why I reached into the month of November for inspiration. A time when Fall is still thriving, but where color has faded and the trees are bare as skeletons.

“While a walk through the woods here in October can be a relaxing activity, doing the same in November carries an overwhelming sense of dread. You’re surrounded by death, and the trees no longer sway and breathe with the air. They’re cold, stiff, bare, and knock together like bones breaking in the sky.

“This atmosphere is what fueled the writing process for Ending Life Slowly, with death and decay surrounding every element of each track. It’s a cliche topic to write about in heavy metal music, but my approach here was focused more on the immense weight death can hold over one’s shoulders. To sit and truly contemplate what it means for all things to come to an end was a sobering experience to say the least.

“I always look at music as sonic therapy, but this was the one time where music couldn’t offer any kind of solace. It just reminded me that life can either go by too fast, or it can end too slowly.” 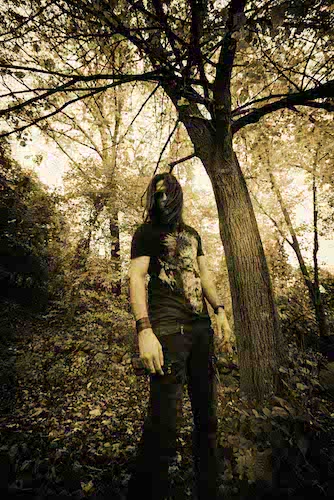 The ending of life, or more accurately the contemplation of surrendering it, is the subject of the song from the new album that we’re premiering today — “Open Your Eyes, Not Your Wrists“. But while death looms over the song, the lyrics provide reasons to go on living. To quote Mitchell again:

“Aside from being a great message to all the kids scraping their skin with scissors, it’s a song that gives credence to hope in a time of crisis. A scenario we all can relate to at some point in our lives. The thought of ending it all is a very natural reaction to life. Whether it be a fleeting glimpse, or a downright dreadful thought that weighs on one’s soul, to consider death is one of our most humanizing instincts.”

Rather than a depressive track, “Open Your Eyes, Not Your Wrists” surges with energy right from the start, with spectral keyboard notes bouncing over a rocking backbeat and a jabbing riff. There are shades of gloom in the gothic intonations of Mitchell’s clean vocals but fiery vehemence in his harsh snarls. And while tinged with sorrow and hints of hauntings, the song has an undeniable soaring quality. It seems to straddle the dividing line at a fateful decision point, yet also pushes onward in a way that conveys resilience.

Ending Life Slowly features cover art by Indonesian artist Sorrow Grips (Gojira). It will be released via Bandcamp on October 31 and you can pre-order it via the link below. We’ve also included the lyrics after the song stream.

TRACK LIST:
1. Death of October
2. Break the Skin
3. Your Last Day
4. Moments Into Memories
5. The Honest Liars
6. Couldn’t Hold On
7. Far Away From Fading
8. Internal Arson
9. Open Your Eyes, Not Your Wrists
10. Under the Skin of the Sun

Open Your Eyes, Not Your Wrists (Lyrics)

Peel back the flesh to reveal what we all know
Just bones and blood to give life to the dirt below
Before that time draws near, understand the distinction
between what you think you feel, and your terminal extinction

I cross the stream into the woods
a place where my contentment once stood
The light was gone, no words to say W
as this the time to give my life away

7 Responses to “AN NCS PREMIERE: AUTUMNS EYES — “OPEN YOUR EYES, NOT YOUR WRISTS””