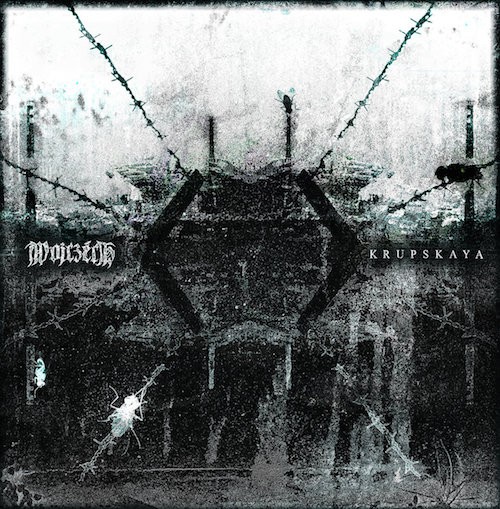 On October 27th — tomorrow! — the German label 7 Degrees Records will release a 12″ split by two explosive but unpredictable grind bands, Germany’s Wojczech and UK-based Krupskaya. What we have for you today is a double premiere, one song from each band’s side of the split.

If the folks at Metal-Archives have got their facts straight, this new release is the 17th split discharged by Wojczech (along with two albums, an EP, and a compilation) in a career that now spans more than two decades. The track we’ve got for you today is the third of the three Wojczech tracks on this new split, an unsettling mauler named “Stunde Des Wolfes“. 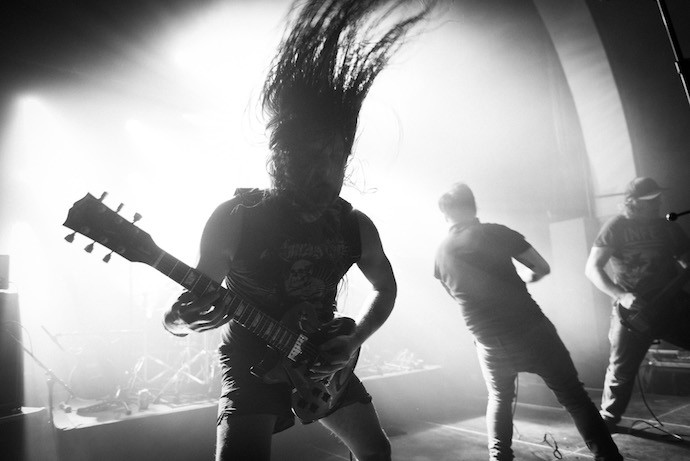 Yes, it is definitely a mauler, but what makes the song especially interesting is that it takes unexpected twists and turns in addition to delivering blasting and bludgeoning intensity.

Grim, murderous, and romping at first, it accelerates in bursts of deranged frenzy and then pulls back into slower movements in which bleak dissonance and methodical hammering hold sway, as well as even slower movements that seem mortifyingly doomed and plague-stricken. As the song drags and crawls even more ponderously toward the end, it’s as if the light of life has finally gone out of the eyes of what was being torn apart in the song’s earlier stages. 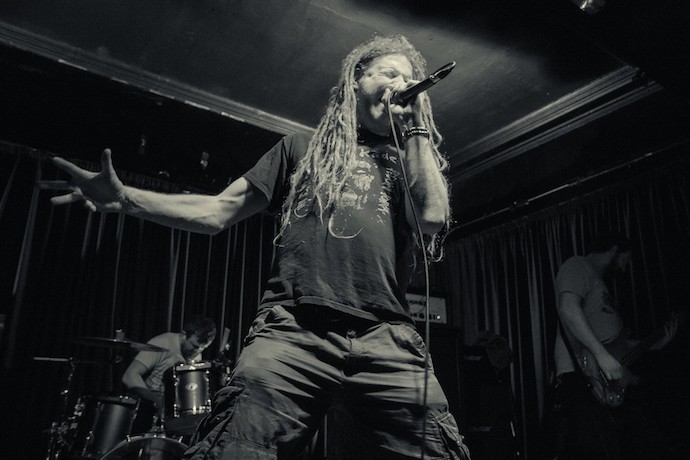 Krupskaya (from Stoke-on-Trent in the UK) haven’t been around as long as Wojczech, having come into existence in 2005 from the ashes of Fuck Hate Propaganda and Kzzch. But since then they’ve toured in 21 countries and released over 70 tracks spread across multiple releases. They’ve added four tracks to this new split with Wojczech, and the one we’re premiering today is the first of those, “Frozen Bodies Against the Wire“.

The head-snapping crack of the snare drum is about the only thing you have to hold onto as this song opens by inflicting a heavy, brutal squall of long abrasive chords, horrifying roars, and the uneasy sound of eerie spoken words. And then… even though I sort of regret spoiling the surprise… the music explodes.

And by “explodes”, I mean it becomes stupefyingly violent — the drummer going faster than seems humanly possible, the vocals boiling over in throat-shredding shrieks, the guitars ripping and slashing with abandon, the low end sounding like a high-speed earthquake.

The music continues to change in mind-fracturing ways, becoming discordant, utterly grim, hallucinatory, oppressive, haunted — but those volcanic eruptions of extreme violence keep coming back, and they make you want to jump out of your skin every time it happens.

You’ll find the complete track release for this devastating split below. You can check out one more song from each group’s side of the split at Bandcamp, where pre-orders can also be placed:

One Response to “AN NCS DOUBLE PREMIERE: WOJCZECH AND KRUPSKAYA”