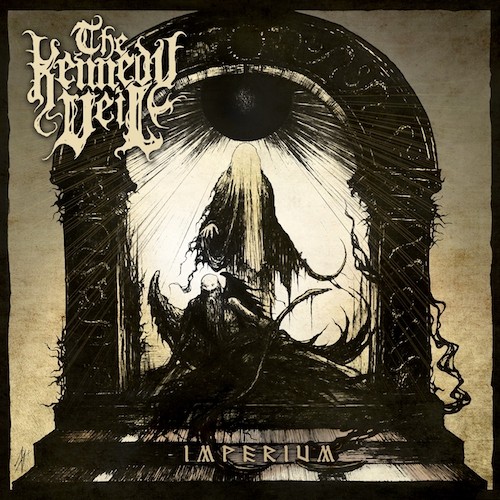 (DGR reviews the new album by California’s The Kennedy Veil, which is out now via Unique Leader Records.)

Three years after the release of their 2014 album Trinity Of Falsehood, Sacramento, California’s The Kennedy Veil return to the stage a somewhat different beast than what they presented on that disc.

In that gap of time, the group have been joined by vocalist Monte Barnard, who has been in a handful of groups around Sacramento (among them the short-lived Soma Ras, and a stint in fellow Unique Leader labelmates Alterbeast) as well has having been live vocalist for groups like Fallujah and Thy Art Is Murder.

Added to this, the group have made a shift in their writing style — as evidenced on their newly released album Imperium — which sees them favoring longer and more densely layered songs, still maintaining the high-speed tempo and blast-heavy brand that the band have made their foundation, but amplified by a very light symphonic element and a heftier focus on letting the rhythm section thud their way through more of the songwriting. 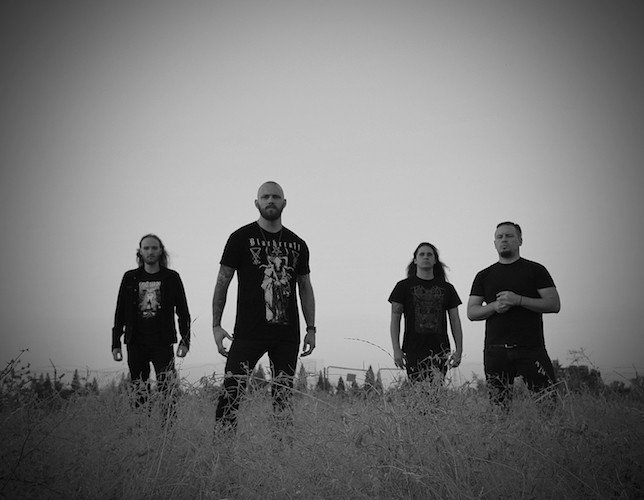 Given the limited number of parts in the overall Kennedy Veil machine, any change in lineup is likely to create differences in the sound, and changing the person directly up front is predictably going to have a large effect. And so Imperium is a different beast than its predecessor: If Trinity Of Falsehood was like guitarists gone mad and buzzsawing their way through a tightly packed half-hour’s worth of music, Imperium is the low-end response, densely packed and ready to hammer everything into submission.

The numbers game being a constant favorite of mine, Imperium comes in as the beefier sibling of the other Kennedy Veil releases to date, weighing in at eight songs and a little over forty minutes. The last album, for instance, is eleven songs and a tad over thirty, so without having heard a moment of the music you could probably guess that this time around The Kennedy Veil are going big, and from moment one of opener “Godslaughter”, that proves to be the case.

“Godslaughter” opens with a cymbal count-off, which you don’t cross paths with in metal too often these days, before descending into an actual building riff — something a little different for Kennedy Veil songwriting; on their previous disc it was a whole lot of ‘3,2,1 GO’, all done in the same breath, style of acceleration. After the words “Reclaim Death!” are shouted, it’s pretty much off to the races for the first few songs, with light symphonic works layered onto massive chugging riffs and the occasional hyper-speed section for the band’s drummer Gabe to blast over.

Interestingly though, in their search for massive sound, the band have created a song that is not only seven-plus minutes in length but actually sounds like two separate tracks invading one another for the listener’s time. Not only that, but the band’s focus on a solid, mid-tempo, almost-breakdown-level chugging riff to open up “Hunted To Extinction” is one of the few times where The Kennedy Veil give in to the deathcore-influenced side of a lot of the current breed of tech-death bands, although pinning them into that genre has felt slightly odd over the years, given their previous focus on unrelenting speed and constant guitar. The signature sound of the band is practically riff piled on top of riff piled on top of riff to create their own version of a musical body pile.

The opening bit of “Hunted” is what they bring back to close out the whole affair, but in between it is another branch of the song, more traditionally focused on violence. On the first few listens, it took a while to connect that “Hunted To Extinction” was actually one solid song, almost double the average length of the work their prior release had contained and definitely the longest track on Imperium. With “Hunted To Extinction”, there is a definite sense that The Kennedy Veil sought to create something larger than just four talented guys dishing out the fast death metal.

The Kennedy Veil aren’t alone in this endeavor, however. On this album they are joined by a group of guest vocalists consisting of Sven De Caluwe of Aborted/Oracles fame, Trevor Strnad of The Black Dahlia Murder, and Dickie Allen of Infant Annihilator/ex-Abiotic on three of their songs, giving the band a veritable who’s who of the current death metal/-core scene to play with on what seems to be every third or fourth song on Imperium.

Trevor appears in the song “Flesh Of The Sun”, which was one of the band’s earliest releases from Imperium so it is probably one of the songs people are more familiar with. His voice tears into the back half of the song but isn’t as immediately apparent as his usual shrill banshee shriek makes him out to be, partly because it seems like he and Monte are lining up perfectly for a brief bit, low-end-wise, throughout the song. As they both go for the high screams is when the two really stand out from one another. In addition that segment of “Flesh Of The Sun” seems tailor-made for him to scream over, sounding like a brief Black Dahlia Murder invasion into another group’s album.

The other person this happens with is the more immediately manic appearance by Sven when he appears in Imperium‘s fourth song, “Draconian”. Sven is probably one of the most noticeable vocalists out there, and one of the most prolific on guest appearances (alongside Trevor) and he brings something of a phenomenon with him — no matter what song he appears in, that song immediately becomes an Aborted song. Doesn’t matter what band, genre, or decade the song is from; if Sven is on it, it shall be an Aborted track. “Wheels On The Bus” with Sven would be an Aborted song in a half second, and incredibly fast to boot.

Nevertheless, “Draconian” is a recognizable Kennedy Veil song, one of the few where the DNA from the group’s previous disc Trinity Of Falsehood bleeds through. It is hyper-fast and basically relentless from start to finish. If you want ‘Mean’, then “Draconian” delivers, along with its follower, the equally fast and violent — and filled to the brim with high screams — “Last Born”. The two make for an excellent pairing in the middle of the Imperium run.

I have been lucky enough, for lack of a better term considering the location you have to be in to attempt this feat, to have had the privilege of attending a lot of local Sacramento shows over the past few years, and likewise to learn about a lot of the groups currently inhabiting this city’s scene. I bring this up because it feels like with Imperium, The Kennedy Veil have done a pretty good job creating a throughline of Sacramento’s more technically minded death metal scene, on top of trying to make themselves distinct in an increasingly-populated genre.

If one band were to be pointed to as having absorbed years of different styles and songwriting, Kennedy Veil’s Imperium seems like an excellent convergence point for that, combining years of ceaseless brutality, technically minded efficiency, and enough drum-kit-fueled destruction to perhaps explain how this branch of the death metal tree continues to thrive in a town often overshadowed by other, larger cities within two hours proximity. That makes an odd kind of sense, in part because The Kennedy Veil’s roster has been ingrained in this city’s scene and in numerous groups up to this point.

Imperium is a vicious disc. In the three years between albums, the one thing that really has not changed is that The Kennedy Veil are a wall of non-stop weapons fire. They are a hyper-polished and hyper-efficient machine created for auditory destruction and their chosen path leaves behind a cratered field of roiling guitar work, slamming rhythm sections, and vocals perfectly suited to match the howling fury that would follow it all. Imperium is a machine purpose-built with one function and in that, it hits its mark.

One Response to “THE KENNEDY VEIL: “IMPERIUM””