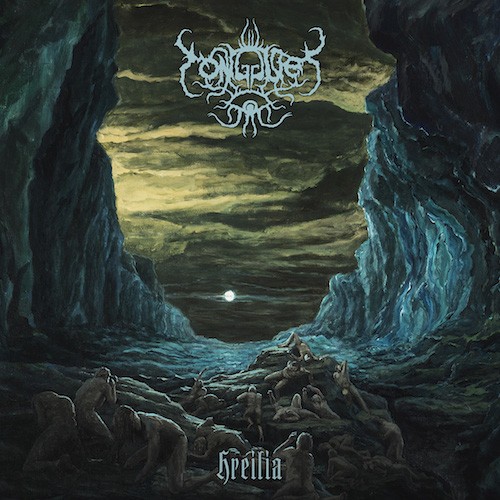 We are very happy to usher in the return of a distinctive Danish band — Tongues — three years after their first release, which was an enormous eye-opener. And we do that through the premiere of a track from their new album Hreilia, which will be released by I, Voidhanger Records on December 8. The name of the song is “Theophagous Wounds Of Earth“.

Tongues‘ debut, three long years ago, was the album-length EP Thelésis Ignis, which was also released by I, Voidhanger and from which we also had the privilege of premiering a track. It was so precocious and unusual that it sounded much more like the brashly creative and self-assured efforts of seasoned hands than anyone’s first outing. More than a year later we did come across (and wrote about) a track that was included on a compilation of disparate music by bands from Aarhus, but otherwise were left wondering what had become of the Tongues album that had been forecast as long ago as the time of Thelésis Ignis. 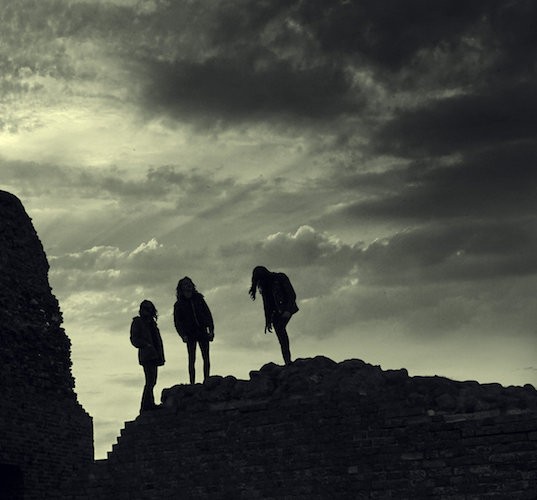 Now we understand that the band has simply been devoting themselves over that span of years to the molding of Hreilia into a shape they could be satisfied with. And it is not a simple or common shape by any means. Its significant ambitions and audacious achievements are evident even from this one song you’re about to hear, but the album as a whole is even more revelatory. It doesn’t chart a single path and follow it in a straight line with head down, methodically placing one foot in front of the other.

The underlying concept of this synthesis of black, death, and doom metal was, we are told by drummer and lyricist C. Qvortrup, inspired by a dream: “That’s where the word Hreilia comes from,” he says. “That word held a significant spiritual value within the context of that dream. It symbolised a profound spiritual disappointment… a nightmare.”

And so, to quote from I, Voidhanger’s own words about the album, even in its most assaulting moments, “when the inner fire that characterized the previous EP bursts out,” the music hangs in a “balance between utmost aggression and psychedelic meditation”, and as the album progresses “the melodies become slowly — yet steadily — more depressive and defeated, ’til Tongues‘ ferocious inner struggle concludes and gives way to sadness and disillusionment”.

“Theophagous Wounds Of Earth” appears relatively early in the album, right after the opener, “Perennial Waves”, and it is an electrifying though disorienting experience. Tempos and moods change, driven by frequent shifts in the compelling drum and bass rhythms and in the intensity, volume, and intricacy of the music (and it is usually very intricate). But its disorienting effects have other sources as well (including the howling and shrieking vocals).

There is, for example, an overarching atmosphere of delirium and doom, thanks to the near-ceaseless dissonance of the guitar leads, which writhe and veer with bewildering abandon over flurries of battering and thundering percussion. When the pace slows, a huge, bone-grinding bass tone augments the sense of ominous gloom. At one point, a storm of blasting drums and frenzied riffing is regularly interrupted by abrupt halts in the pandemonium and the reverberation of alien strings.

Your eyes may be open wide and your jaw hanging slack in wonder by the time you get close to the end of that segment, but there’s more to come, beginning with a hard-driving drum rhythm and a vibrant riff over which a freakish, incendiary solo will inflict further impairment of your sanity, followed by a crescendo of wild, dervish-like explosiveness.

And remember, all of this happens in just the space of one song. There are six more on Hreilia that are equally surprising and equally riveting.

The album features painted cover art by the band’s vocalist A. Lovmand, and he also recorded, mixed, and mastered the album. Francesco Gemelli was responsible for art direction and design.

Hreilia will be released in a limited edition of CDs with a 12-page booklet on December 8, and a limited release on vinyl is expected in January 2018. For more info, watch these spaces:

Touched by divine madness
Slithering tongues of fire
Crowning the skull of the corporeal
Alethea; the veil has been lifted