On November 10, Selfmadegod Records will release a new EP by Antigama, entitled Depressant, on CD (with an LP version coming soon). In this post we present a detailed review by DGR, as well as the premiere of an eye-popping video created by Chariot of Black Moth for a head-wrecking, bombing-run of a track called “Now”. You will find the video lurking in the midst of the review, which begins here:

It doesn’t feel like it has been that long since the cyborg Polish grind monsters of Antigama unleashed The Insolent (review penned by yours truly here) upon the world, and yet two years and a handful of months later, the band are returning with a sub-nineteen-minute, seven-track EP named Depressant via Selfmadegod. The group, ever busy in their time between full discs, found time since The Insolent not only to contribute to two different split releases, but also then managed to jam out seven songs of new music all wrapped around the concept of pill popping.

The songs are all tied together through a series of segues, and a strain of utter madness seems to run through the whole Depressant campaign. The opening first minute of the EP dedicates itself to a faux-infomercial alongside some smooth-jazz that is honestly not too out of place in an Antigama disc; the band’s methods of doing whatever the fuck they want quickly unfurling themselves as they kick into full obliteration mode after the infomercial promises to save us from “pain….pain….pain….pain”. Ever fueled by a rage that borders on utter annihilation, we are once again invited to go on a roller-coaster ride of music verging on warped instrument destruction via Depressant.

The first two songs of Depressant, “Empty Paths” and “Anchors”, are both written in such a way that you can almost imagine the band literally flinging themselves up and down the fret boards of their instruments — note changes become violent transitions more often than not in Antigama songs, and the band make pretty good use of constantly bending and warping their sound so that the music behind vocalist Lukasz Myszkowski matches his yelling in ferocity.

Across the first two tracks of Depressant you’ll find yourself in familiar Antigama territory, trapped with the band inside of an aluminum trashcan rolling down a hill, the noise within making up a semblance of their music. They play dangerously close to sheer noise for a few seconds, but the chaotic soundblast is what Antigama revel in and Depressant is in that vein, feeling like a version of some of the songs on The Insolent without the spacier sections added in.

That’s not to say the band don’t find the time for a little experimentation within their Depressant fortress, breaking out what could be their most “conventional” song next, treading in the waters of hardcore and punk, sounding something like a warped version of Trap Them with a taste for grind with song three, “Division Of Lonely Crows”.

“Division Of Lonely Crows” is one of the few times when you could say Antigama are actually having something masquerading as “fun” and mean it, and not in a “this idiot listener has no idea what he’s in for, he’s going to get his face sandblasted off” sort of way. Driven by the same sort of songwriting style that resulted in a song like “Sentenced To The Void” on The Insolent, Antigama make good use of a constantly bobbing riff and punk-worthy drumming section that you can headbang your way through with ease. That is a feat for a band who usually make their listeners look like they’re in the midst of a muscle spasm if they actually try to headbang along to Antigama’s usual fare.

Of course the band drive all of that fun six feet into the dirt by orbital rail-gun strike with the sub-two-minute blaster of “Now”, but who is to complain by that point?

Of course the real fun comes when Antigama take the gloves off, and “Room 7”, with its trapped-in-an-asylum motif, does a lot of that, moving in ways just as unconventional as the opening songs on the EP. It devolves into an almost endless smattering of guitar and drum blasts trying to throw each other off of a spinning platform, combined with multiple spoken samples and screaming.

The following song, “Depressant”, feels like a doom track by comparison, and with good reason; “Room 7” feels like it was meant to be the descent into insanity with the band’s music serving as the soundtrack, then settling into an overmedicated malaise of the kind we see portrayed in many a film.

“Depressant” crawls, part ambient and part crashing instrumentation, four minutes of very different music from the grinding mess that moved before it, but that is partially the point. Depressant‘s album art depicts a woman with a pill on a fishhook, and the band are painting the results of the situation.

Depressant‘s final track “Shut Up” is ferocity from front-to-back that literally falls apart at the end, becoming just a slowly devolving drum beat and a return to the pain infomercial that opens the disc. 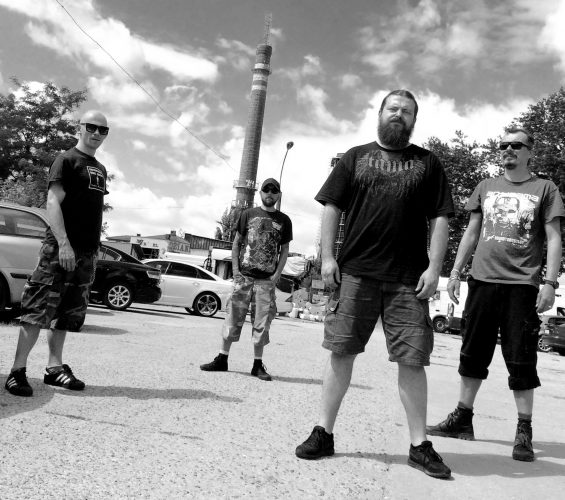 At under twenty minutes, Depressant is Antigama condensed, the experimental violence all smashed into a dense ball of sound and unleashed upon the world. It takes a wide concept and shrinks it down to a point-by-point journey into a hellscape of grinding noise, taking a singular overarching situation and matching it to the band’s brand of hyper-fast and ear-piercing grind.

There was no question that Antigama wouldn’t let up in the time between The Insolent and now, and knowing that, Depressant represents the band once again unleashing another raw, liquid-hot, mass of madness for their fans to take in. Depressant is a quick, seven-track whirlwind of sound that is bound to leave an impact on you long after it wraps up, closing on the same ruminations of “Pain” that the EP opened with.

Depressant was recorded and mixed in July/August 2017 at Warsaw’s JNS Studio by the band’s long-time collaborator Paweł Grabowski. It was then edited and mastered by James Plotkin (O.L.D., Phantomsmasher) at Plotkinworks. The artwork was created by Antigama’s vocalist Łukasz Myszkowski. For ordering info, check these links: