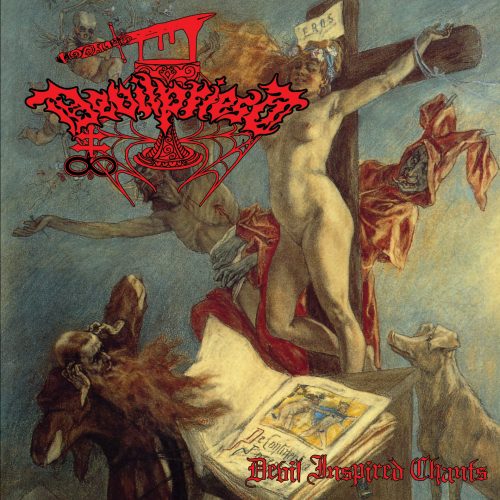 Hailing from the Silesian region of Poland, Devilpriest is a trio whose turbocharged debut album Devil Inspired Chants will be released by Pagan Records on November 10, and we have the premiere of a full album stream for you today.

This is an example of a debut release that doesn’t sound anything like a first effort, but rather the kind of supremely powerful and highly accomplished music that you would expect from a band deep into their career. Fueled by satanic fervor, the band combine elements of mainly ’90s-era death metal and black metal and deliver the addictive results with clarity, stunning force, ravaging ferocity, and eye-popping technical skill. 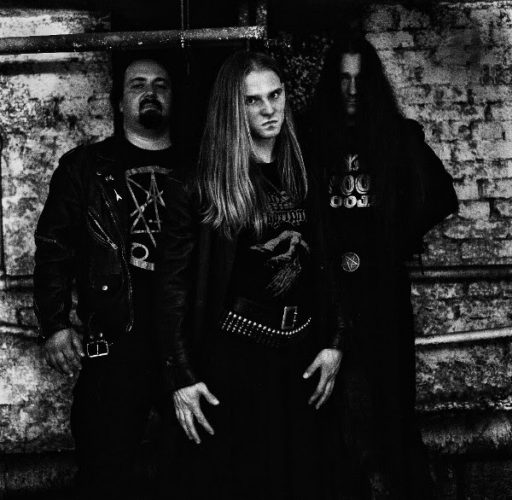 Devilpriest follow a largely uniform songwriting format across the album’s eight tracks, but it doesn’t wear out its welcome.

The opening track, “Withstand the Holy Ghost” provides a good introduction to Devilpriest’s strategies. Launched by a dark, dissonant, booming, mid-paced introduction, it becomes a thundering assault that includes a writhing, reptilian riff. The music continues to ebb and flow in its pacing, with gloomy, moaning chords, dismal leads, and molten solos interspersed among the song’s barbaric tirades and merciless pounding.

All the songs include rapid changes in tempo and rhythm, mixing sensations of ominous imperiousness and boiling chaos, with the Luciferian lyrics expelled in savage howls and vicious, tyrannical proclamations. The very catchy riffs within these songs are likewise dynamically changing — bombastic and berserk, jolting and insectile, magisterial and marauding — and laced with lead guitar motifs that are variously pestilential, frenetic, freakish, and hallucinatory. And every song includes multiple eye-popping, swirling, shrieking guitar solos.

Really impressive instrumental proficiency is demonstrated by all three performers, including a persistently jaw-dropping drum performance. And while there’s an old-school aesthetic in the music, it’s produced in a way that yields modern clarity without sacrificing power — all the better to permit an appreciation of the band’s technical skills.

Pagan Records will release the album on CD, LP, and digital formats, and pre-orders are available through the links below.

7 Responses to “AN NCS PREMIERE (AND A REVIEW): DEVILPRIEST — “DEVIL INSPIRED CHANTS””