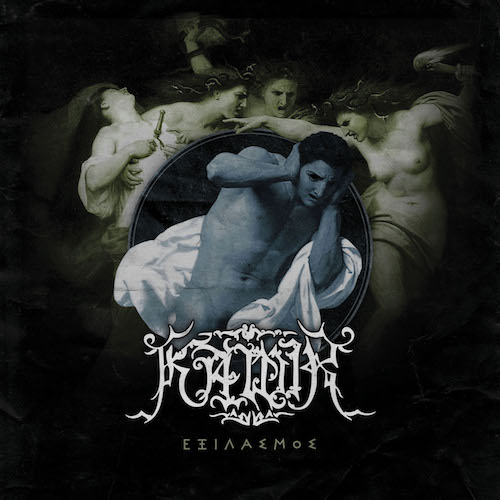 Anyone who has studied the fascinating annals of Hellenic black metal will recognize the name Kawir. Their roots are deep and old in the underground, their music has always been distinctive, and the lyrical themes of their songs have consistently drawn from the wellsprings of ancient Greek mythology. They were the subject of a Rearview Mirror post that I wrote (here) to celebrate one of their older works, and yet they also released a fantastic album more than 20 years after that one in the form of 2016’s Father Sun Mother Moon.

Even though that album included more than an hour of new music, Kawir have returned with a new 42-minute opus named Exilasmos, which is being released today by Iron Bonehead Productions. It is a rare piece of art, one that follows a fascinating conceptual narrative extracted from Greek myth and provides powerful music that’s a match for that enduring narrative’s larger-than-life scale and the horrors and tragedies it describes. Today we have a full stream of the album, along with the following review of its remarkable accomplishments. 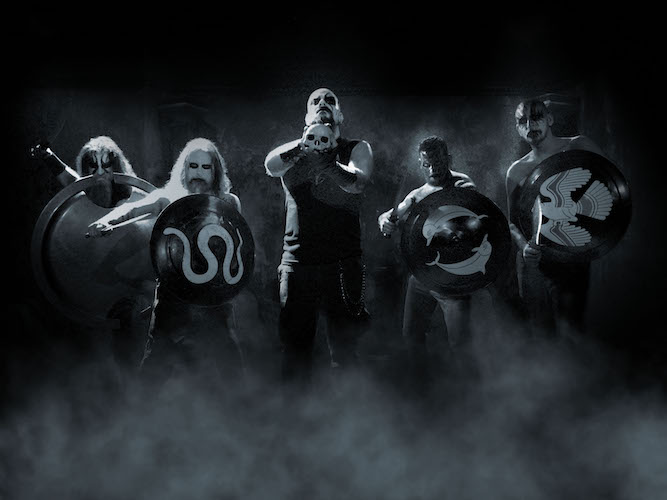 The six songs on the album (with lyrics in Greek) focus mainly on different members in the bloodlines of two cursed dynasties — the House of Lavdakides (Oedipus Tyrannus) and the House of Atreus — whose stories makes up some of the most shocking and terrible chapters in the mythology of ancient Greece. These are gruesome tales of lives ruined both by human cruelty and weakness, and by the wrathful retribution of the Gods. These stories have endured for millennia, and perhaps one reason is that they captured a feeling among an ancient people that has persisted through the present day — a conviction that any notion of human control over the fortunes of life is a delusion.

And so “Lykaon” describes the foolishness of the first King of Arcadia who sacrificed his own son and served his roasted flesh to Zeus, who became so enraged that he transformed the king and his offspring into the forms of wolves.

Perhaps the best known of the myths incorporated into the album, “Oedipus” narrates the tragic story of the king of Thebes who fulfilled a prophecy by unwittingly killing his father and marrying his mother, who hanged herself when she discovered the truth of these events, leading Oedipus to tear out his eyes with his own hands and offer them to the Sun in an attempt to lift the divine curse he had unknowingly brought upon his family and his city.

Tantalus, the subject of the album’s third track, was the founder of the House of Atreus, who sought to appease the Gods by sacrificing his son Pelops, boiling his severed parts, and serving them in a banquet for the Gods (shades of Lykaon!) — which led Zeus to strike down Tantalus with lightning and sentence him to eternal suffering in Tartarus.

Atreus, a grandson of Tantalus, seized the throne and sought revenge on his brother Thyestes by sacrificing the latter’s three sons, dismembering them, and cooking them in a soup served to Thyestes, along with wine mixed with their blood. In their horror, the Gods turned back the sun and cast the city into darkness. The album’s fourth track, “Thyestia Deipna“, which translates to “Thyestean Feast”, takes this tale as its subject.

Everyone familiar with The Iliad will know the name Agamemnon, the legendary king and commander of the Greek forces in the Trojan War — and a son of Atreus. But the song on the album that bears his name focuses not so much on his feats of heroism but on what happened when he returned home to find that his wife Clytemnestra had taken Aegisthus — a son of Thyestes — as her lover. Clytemnestra murders Agamemnon, fulfilling Aegisthus’ desire for revenge over the horrors perpetrated by Atreus on his father.

And the album closes with the story of Orestes — the son of Clytemnestra and Agamemnon — who avenges his father’s death by killing both his mother and her lover, and then goes mad over what he has done. He is pursued by the Erinyes (the furies) as punishment for his matricidal deed, but is granted a trial by Athena before 12 judges and is ultimately relieved of the curse, allowing him to live in peace at last.

There is violence, terror, madness, and tragedy in these stories, and Kawir capture these sensations in the often violent intensity of their music. In every song there are moments when the music explodes in an assault of maniacally blasting drums and grim or fiery tremolo riffing, and the songs are further intensified by the hair-raising quality of lead vocalist Porphyrion’s livid, incinerating shrieks. Such moments bring back to the surface a darker and more aggressive side of Kawir’s long history. But this is just one aspect of the music on Exilasmos, though it could be considered an important way of representing some of the common themes that run through the myths that are the album’s conceptual focus.

In fact, each song on the album has its own character, each one marked by distinctive melodies, moods, and instrumental or vocal accents. The opener “Lykaon” is a mid-paced head-mover — dark, doomed, heavy, and haunting, with an occult atmosphere that persists until the final minute, when the song erupts in a crescendo of chaos. “Oedipus”, on the other hand, is a supremely vibrant, high-intensity track, with the theatrical quality of an epic pageant. It moves between racing movements with a sorrowful melody and more mid-paced rocking passages marked by a jolting, pulsating riff.

“Tantalus” also has its own character — fiery and deranged, unsettling yet also glorious and soaring, while “Thyestia Deipna” seems hallucinatory, like a superheated fever dream, or a nightmarish opium dream, yet includes big, jolting percussive bursts and yet another jaw-dropping drum performance (which are spread all over the album).

Introduced by the sound of bagpipes and featuring heroic clean vocals by guest singer Alex the One, “Agamemnon” is simply a glorious, epic track, dramatic and grand, and Alex’s layered, choral vocals aid in giving a similarly mythic and majestic cast to the intensely memorable melodies of “Orestes”.

This is the kind of music that should appeal as much to fans of Iron Maiden and Judas Priest as to devotees of mid-’90s Hellenic black metal. The album is loaded with transfixing melodies, solid-gold riffs, fantastic soloing, and compulsive rocking rhythms — as well as those eruptions of pitch-black delirium and violence. The music does justice to its ages-old, mythic subject matter, and it would be a great and varied listening experience even if you knew nothing about its conceptual inspirations.

As noted at the outset, Iron Bonehead Productions is releasing Exilasmos today, November 3, and will provide the album on CD, LP, tape, and digitally. The album was recorded at Esoteron Studio in Athens and mixed and mastered by Esoteric’s Greg Chandler at Priory Studio.

We have a full stream of the album below, along with a lyric video for the closing track “Orestes”.

3 Responses to “AN NCS ALBUM PREMIERE (AND A REVIEW): KAWIR — “EXILASMOS””