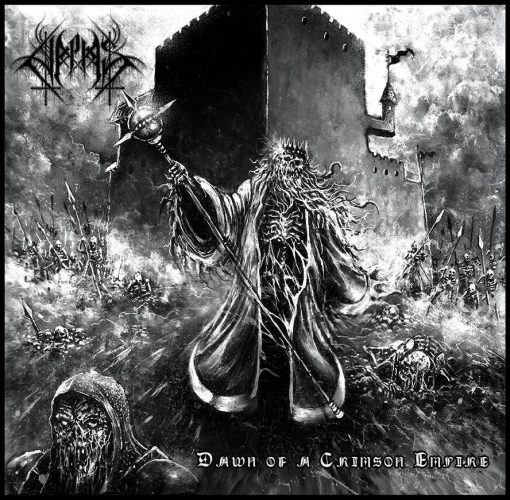 To begin, I have a track named “Through The Forest” from the forthcoming debut album Dawn Of A Crimson Empire by the German black metal band Halphas. It will be released by Folter Records on December 15.

I’ve learned that Halphas originated in 2014 and released a demo the next year before starting work on this first full-length. Based on this song, it’s an album I’m eager to hear.

“Through the Forest” isn’t a meditative stroll under leafy canopies, but instead a full-force storm front capable of leaving tall timbers in piles of splinters. The low-end delivers immense power, with drums that resemble mortar fire and a bass rumble that sounds like an earthquake in progress, while the scything and jolting riffs are equally electrifying — pure black fire, with the further benefit of an intoxicating melody. And speaking of fire, the vocals are incinerating in their raw and maniacal viciousness. 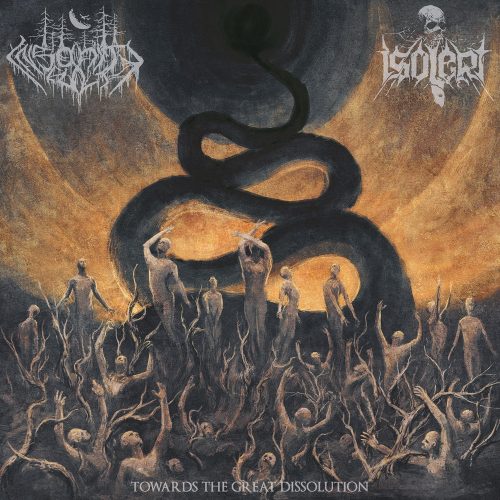 The wonderful cover of this next release by Misanthropic-Art caught my eye, and my interest was peaked further when I saw the name Isolert, whose self-titled 2017 EP I briefly reviewed here last March. This time Isolert has joined forces with another Greek band named Insanity Cult, and their split — released just yesterday — is entitled Towards The Great Dissolution. Each band has contributed two songs to the split.

Insanity Cult has previously released a 2014 EP (Insanity Be My Kvlt), a 2015 debut album (As My End Unfolds…), and a second album in February of this year (Of Despair and Self-Destruction). Although I haven’t heard any of those previous releases, their two tracks here are very impressive.

The guitar harmony in the slower phase of “Thorns…” is drenched in sorrow, and immensely appealing, while the boiling intensity of the main riff in “Existential Entropy” conveys sensations of a despair that has become madness. “Existential Entropy” also has a slower phase, near the end of the song — a desolate, reverberating guitar melody set against the sound of a heavy rain — but don’t get too comfortable as it begins casting its spell.

In addition to that excellent self-titled EP from earlier this year, Isolert have a 2015 demo (Isolated Soul) and a 2016 debut album (No Hope, No Light…Only Death) on their resume. Their two songs here — “Dreams of Emptiness” and “I Hide My Soul Inside the Trees” — make a fine pairing with the Insanity Cult tracks.

Both are devastating pieces of music, driven by a rhythm section that surges and pounds like the drive of huge pistons and desolate repeating riffs that insinuate themselves deeper and deeper into the head the more they go on (there’s a rocking riff that surfaces in the second song which is especially addictive, as well as a riveting solo). Both also feature breaks in the onward rush that include lacings of unsettling melody indicative of chaos and madness. And speaking of madness, the vocals are wrenching manifestations of a mind that’s tearing itself into tatters.

In short, Towards The Great Dissolution is an intensely gripping split release that will keep you on the edge of your seats and may leave you gasping for air by the end. It’s available on Bandcamp, both digitally and in a CD edition released by Narcoleptica Productions and More Hate Productions. A tape edition is expected in December through Metal Throne Productions. 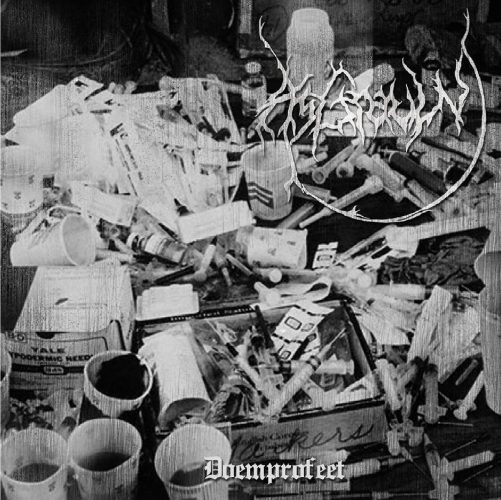 I decided to follow that last split with another one. In this case, the two bands are both from the Gelderland province of the Netherlands — Asgrauw and Meslamtaea. The split was released on 7″ vinyl and digitally in August of this year, but I discovered it only recently. The name of the spit is Utopia, and it’s excellent.

Asgrauw explain that their name refers to “the scythe shaped shining of the new moon” and is also a Dutch word “for the grim and pale color of ash”. Before this split they released two albums, Schijngestalten in 2014 and Krater in 2016.

The Asgrauw track, “Doemprofeet” (which takes as its subject matter the Jonestown mass murder/suicide in 1978), heaves and rocks, thunders and rips, becomes a blizzard of blasting drums and cold, cutting riffage, and then scampers and gallops against a backdrop haze of wintry melody. More changes of rhythm lie ahead, and they help maintain a firm grip on the listener’s attention, while the song’s melodic currents seep ever more deeply into the mind. The vocals are as raw as lacerated flesh.

This is Meslamtaea’s first release since a split in 2008, and the first of the project’s music that I’ve heard. The slow, mournful sound of e-bowed strings and somber bass notes that begin “Neutronenstorm”  turn out to be merely the first steps in an increasingly fast and intense piece of music that ruminates about a nuclear apocalypse that is yet to come. Suitable to its subject matter, the melodies are strikingly bleak, but they’re also beguiling. Like the Asgrauw track, there’s quite a bit of rhythmic variety in the drumming here as well — not surprisingly, since Meslamtaea’s sole creator is also the drummer for Asgrauw.