Those are not happy faces. And those men don’t make happy music. In fact, the Portuguese band Axia have sought to infuse their music “with infinite levels of self-inflicted negativity and hopelessness.” As their vocalist Alex Vale says, they are “focused, cursed and inspired by the ruin shadowing our material ashes. Forward leads nowhere…”

As time marches forward, however, it will lead us to the release of Axia’s new album Pulverizer in April 2018 by Selfmadegod Records. That seems painfully far away, and the waiting will begin to seem even more painful once you listen to “Vultures“, which is the track from Pulverizer that we’re premiering today, because it’s really, really good. 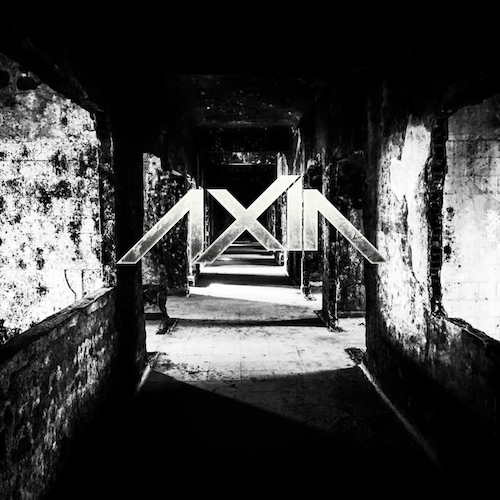 Judging by the sound of “Vultures”, Axia were deadly serious when they named this album Pulverizer. The music is an absolutely slaughtering hybrid of grindcore and death metal, a furiously paced representation of a highly mechanized war zone, with a massively distorted and destructive sound. The deep, blazing riffs are almost overpowering, the low-frequency drum-and-bass assault resembles the thunder of cannons, and the light-speed snare attack is eye-popping (and head-battering).

When the pure fury of the song relents, it’s only to inflict a sequence of staggering, pile-driving hammer blows. The blood-red rage of the vocals never relents, however. With a mix of horrifying roars and deranged shrieks, they convey a ravaging hunger for oblivion.

It may not be happy music, but it sure makes me feel good to hear it. That’s a phenomenon that extreme metal fans always have trouble explaining to people who’ve never heard this kind of music before — how such full-force hurricanes of violence and rage can be so appealing. I usually make some passing reference to the cathartic effect and explosiveness of the energy — and “Vultures” has all that in great abundance.

The members of Axia, who collectively have experience in such bands as The Ominous Circle, Holocausto Canibal, Colosso, and Heavenwood, among others, are vocalist Alex Vale, guitarist Max Tome, bassist Ze Pedro, and drummer Marcelo Aires.

Pulverized was recorded at Sound Stone Studio and HNK Studio. It was produced and mixed by Max Tome and mastered by Peter in de Betou (Arch Enemy, Amon Amarth, Meshuggah, Hypocrisy, etc.).

For further news about the album’s release by Selfmadegod — which now immediately goes on our 2018 highly anticipated list — watch these spaces: