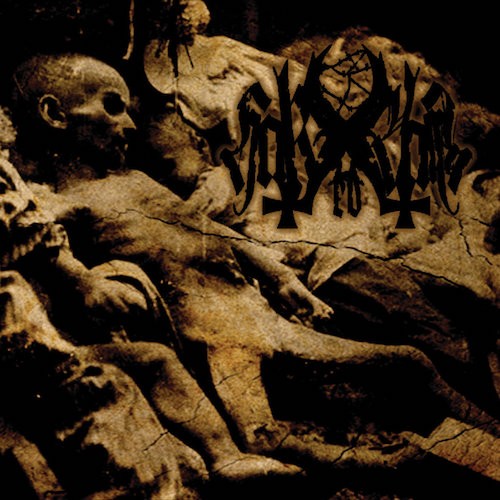 Hak-Ed Damm is a black metal strike force founded in Quebec City, Canada, in 2007 with the idea of creating a hate-filled “musical war machine concept”. For their name, they chose Hebrew words that signify “field of blood”, and also a place in Jerusalem associated with Judas Iscariot.

Since their formation, the band have released a 2010 debut album (Nekrowristfucked) and a series of splits from 2011-2013. And on November 26th, in conspiracy with Satanath Records (Russia) and Death Portal Studio (U.S.), the band will release their second album, Holocaust Over Dresden. Today we bring you today the premiere of the album’s closing track, “Jade with the Deflowered Scalp“. 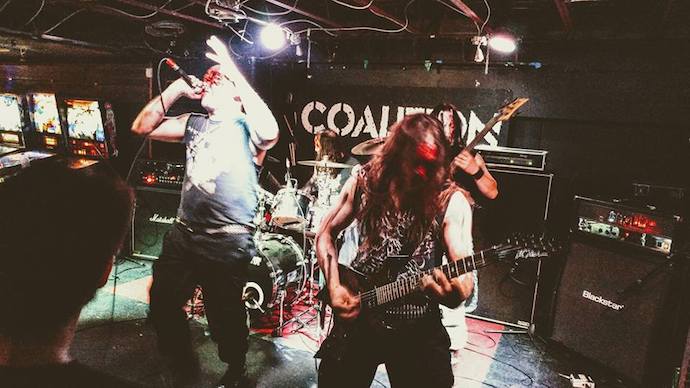 The new album, named for the obliterating fire-bombing of Dresden in World War II, is described as “a concept album touching a lot on W.W.2’s historical facts, revealing the bestial nature of man and atrocities commited in this period” — and of course there was no shortage of atrocities in that war. The album is recommended for fans of Marduk, Tsjuder, and Anaal Nathrakh. And its militaristic approach is vividly displayed in the total war of the song you’re about to hear.

Everything about the first two-and-a-half minutes of the song seems geared to mercilessly blast the listener’s mind into fragments with the overpowering violence of its assault — a stunningly fast strafing run of blast-beats and hammering gallops; the prominent bubbling tones of the bass; the maniacal writhing of the abrasive riffing; and the staggeringly unhinged quality of the vocals.

And then, after that opening salvo, when the blizzard-like drumming subsides, a new dual-guitar riff with a rocking cadence appears… and it’s as addictive as it is corrosive and soul-shudderingly bleak. As the band begin to ramp up toward another frenzy of mechanized destruction, a martial snare beat takes control, with the sounds of a military officer issuing proclamations. The song closes with a different song… one with the solemn and reverent tones of an army choir.

Satanath Records and Death Portal Studio will release the album on November 26, and pre-order info can be found through the following links.

One Response to “AN NCS PREMIERE: HAK-ED DAMM — “JADE WITH THE DEFLOWERED SCALP””