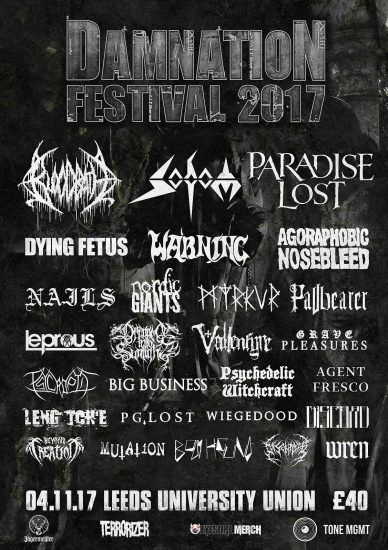 (Andy Synn was fortunate to witness the 2017 edition of Damnation Festival in Leeds, UK, on November 4, and prepared this report on the performances, along with many videos.)

One of the things I love most about Damnation Festival is that, because it always sells out, the organisers are free to keep things as underground and as intimate as possible, and to resist the pressure to book some of the more popular (and more predictable) marquee names which you’ll see play other festivals year in and year out.

That doesn’t mean that Damnation is an “elitist” event by any means – in fact the atmosphere and camaraderie on display every year is another one of the big draws for me, as it always warms my heart to see a mingling of Metal fans, of all ages, races, colours, and creeds, in an environment dedicated purely to the love of live music – but this focus in quality over quantity, on providing a unique experience, both for the fans and for the bands who play, is something that sets it apart from its peers and rivals.

After some minor issues with getting my press wristband sorted (kudos to the security staff who tried their best to direct me while working from conflicting pieces of information), I managed to wrangle myself a spot just to the left of the stage to catch Belgian Black Metal three-piece Wiegedood playing an early slot to an already pretty packed crowd.

Now I’m a well-documented fan of the band’s debut album, De Doden Hebben Het Goed, and while I don’t think the follow-up (released earlier this year) is quite as good, I still relish any opportunity to catch them live, as there’s something so beautifully primal about their music (and their performance) which never fails to send a shiver down my spine, and their performance here was no exception (though I still wish they’d get a bassist…)

Anyway, check out the footage of the title-track to their latest album below for evidence why they’re a band you should be paying a lot more attention to.

A quick hop, skip, and a jump later, and I managed to nestle myself into the crowd just in time to catch Belgian blast-fiends Leng Tch’e rip the Tone MGMT Stage a new orifice with their punky, punch-drunk brand of hyper-aggressive Death-Grind.

Playing to a surprisingly (or maybe unsurprisingly) raucous crowd, the quartet did exactly what you’d expect them to do – punish, pound, and pummel without mercy or restraint, whipping up an impressively energetic response from the assembled audience (including what would prove to be the first of several circle pits throughout the day) in the process.

Back over on the Terrorizer Stage it was time for some ugly, old-school, Doom-encrusted Death Metal courtesy of Gregor Mackintosh and his cadre of hand-picked Metal mercenaries, aka Vallenfyre.

Grim and groovy, the band’s music is undeniably timeless and completely trend-proof, but never comes across as contrived or derivative, and the live show is exactly the same, with the quintet barrelling through a series of cuts from all three of their albums, pausing only occasionally between tracks for Mackintosh to deliver some suitably sardonic, close-to-the-bone humour, in what was a triumphant performance of true Metal grit.

By way of contrast to Vallenfyre’s gruesomely old-school shenanigans, Beyond Creation then delivered an ultra-modern, hyper-technical, but almost hypnotically engaging, masterclass in cutting-edge Death Metal over on the Tone MGMT Stage, playing to an absolutely packed house as if their lives depended on it, and marking themselves out as an early highlight of the festival.

Of course the next band on my itinerary, the truly terrifying Dragged Into Sunlight, then went on to set the bar for the rest of the day with a performance whose sheer savagery and raw intensity was only equalled by… well, probably the last time I saw them in fact.

Anyway, words fail me on this one, so hopefully the video below will give you some inkling of how utterly devastating the band are in the live setting.

Having been thoroughly beaten and befouled by DiS, I then made my way upstairs to the main stage to catch resurgent doomsters Warning play their legendary second album, Watching From a Distance, in its entirety.

And although the band had been inactive for a while before their most recent reformation, there was very little evidence of rust on display to my eyes (and ears), with Patrick Walker’s voice in particular seeming to have only improved with age.

Interestingly enough, the performance of “Footprints”, which you can see below, was preceded by Walker helping a young man propose to his girlfriend (she said yes, btw), which was definitely not something you see every day.

Now while making my way out of Beyond Creation earlier, I happened to bump into my buddy Ross, who recommended that I catch Icelandic Prog-Pop-Rockers Agent Fresco later on if I could… and since my only other option was to go watch Nails and their ultra-macho bro-core, I decided I’d give them a shot, if only because they promised to be something a little bit different.

Thankfully this gamble paid off handsomely as the quartet put on one hell of a performance which – although possibly too poppy and melodic for a lot of our audience here at NCS – certainly stood out from the crowd, mixing some surprisingly technical, off-kilter metallic moments, with a wealth of grandiose progressive touches and a plethora of soaring, skyscraping melodies.

Plus it’s always impressive seeing someone switch back and forth between guitar and keys mid-song, which is something that the band’s guitarist Þórarinn Guðnason was seen to do multiple times throughout their set.

Bringing things back onto a more metallic track, the main stage soon fell under the sway of Paradise Lost and their triumphantly gloomy repertoire, whose performance – though not always the most energetic or engaging – served to remind this particular listener just how many absolute classics (or, in the case of their more recent material future classics) the band have under their collective belt, and just why they’re considered living legends by those in the know.

Now if Dragged Into Sunlight were the band to set the bar for the day, then Leprous were probably the only other act to step up to it… albeit in a very different way.

Culling tracks from each of their last three albums, the current line-up of the band (which now includes a live cellist) is probably the tightest they’ve ever had, and much of the credit for this must go to rhythmic wunderkind Baard Kolstad, who continues to prove himself one of modern music’s most impressive, and most versatile drummers… although the rest of the band are no slouches either, and I’d contend that bassist Simen Daniel Børven possibly had the single best bass tone I heard the entire weekend, while Einar Solberg remains one of the most distinctive and emotive vocalists in action today.

It also helped that the band’s light show was particularly stellar, keying into and enhancing the performance perfectly, and that their live sound is just that little bit crunchier, that little bit beefier, than it is on record, making for an all-round electrifying, show-stealing experience.

After a solid block of proggy/melodic/doomy acts, it was nice to head back down to the Tone MGMT Stage again to catch Aussie techbringers Psycroptic ripping things up, even if the venue was surprisingly less busy than I would have expected.

The band’s sound was, occasionally, a little bit thinner than I would have liked (the excessively clicky kick-triggers certainly didn’t help much in that regard), but they made up for this with sheer gusto, and I doubt anyone who was already a fan of the band would have been left disappointed, even if the performance overall may not have won them many new followers.

Back over on the Terrorizer Stage I caught about as much as I could tolerate of Agoraphobic Nosebleed – sorry agoraphobes, they just don’t do anything for me – before heading back upstairs and, on a whim, deciding to check out instrumental Post-Rockers Nordic Giants.

And oh boy, am I ever glad I did, because their entire performance was absolutely spellbinding… so much so that I actually went to see them again last night, and will be writing more about them later in the week.

In the meantime though, here’s some Agoraphobic Nosebleed for you.

The climax to the day’s festivities was left to Swedish supergroup Bloodbath (though I must say, their singer has a suspiciously good British accent…) and their brutally effective, shamelessly enjoyable, take on classic Death Metal.

Highlights of the band’s set included a suitably gnarly “Breeding Death” and a crushing one-two rendition of “Ways to the Grave” and “Cancer of the Soul”, all building up to a fake-out finale of “Mock the Cross”, before the grimy, blood-soaked quintet returned to the stage for a triumphant run-through of that seminal power ballad “Eaten”, sending the assembled hordes home happy, sweaty, and filled to the brim with ghoulish glee.

And, really, what more could you ask for!

Thanks and kudos to everyone who made this year’s event possible, and you can definitely expect to see me again in 2018!