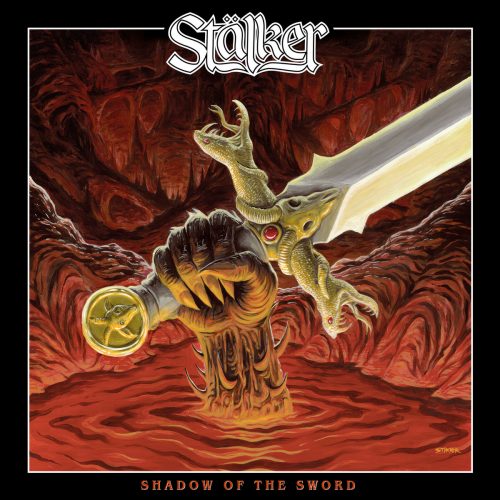 (Our New Zealand friend Craig Hayes (Six Noises) brings us his review of the new album by NZ’s Stalker, which will be released today by Napalm Records.)

The pressure’s definitely on speed metal trio Stalker to step up and deliver with their first full-length, Shadow of the Sword. The Wellington, New Zealand band have already made a huge impression, selling around 1,000 copies of their neck-wrecking Satanic Panic demo in 2016. That’s obviously a significant achievement for any band in this day and age, let alone one based in a far-flung corner of the world. There’s clearly an audience hungry for Stalker’s music, which explains why Napalm Records snapped the band up. There are a number of reasons why the band have proven to be so popular, and why the expectations for Shadow of the Sword are set so high.

Reason #1: Stalker’s guitarist, Chris Calavrias, once played in (the now defunct) high-speed power metal band Razorwyre. That name might not mean much if you’re a full-time guttural grunt aficionado, and Stalker certainly aren’t Razorwyre under a new guise. But Razorwyre’s blistering full-length debut, Another Dimension, met with a rousing reception at home and struck gold in Europe too. 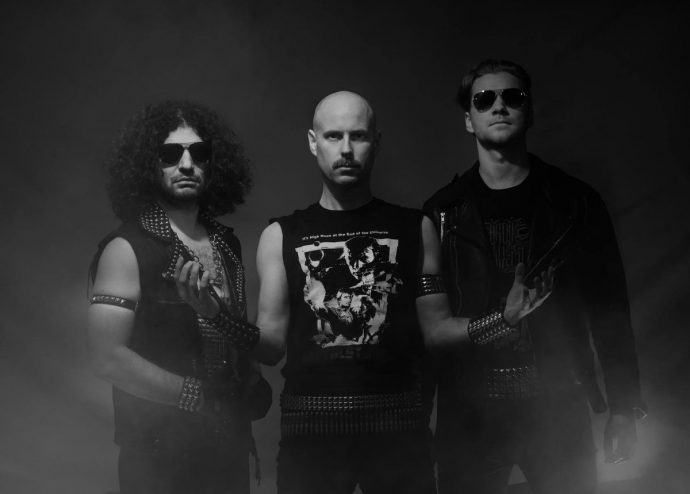 Reason #2: TRVE METAL is what Stalker are all about. The band smash raw speed metal into classic ’80s metal, and it’s an authentic and authoritative sound that also features bursts of punk and thrash. Stalker inhabit a radioactive battlezone, somewhere in the Mad Max via The Evil Dead school of hyperbolic theatrics. It’s a realm where gauntlets, bullet belts, patched vests, and over-the-top bravado are all mandatory requirements.

In essence, like fellow seekers of metal’s halcyon days such as Ranger or Speedtrap, Stalker find themselves in that arena which Slayer, Razor, and Exciter once occupied. It’s that shred-head theatre of war where the likes of Raven, Helstar, Agent Steel, and Toxik also resided. And it’s there that Stalker unashamedly wrap their arms around metal’s most pyrotechnic traits.

Stalker’s appeal is helped enormously by their instinctive ability to write red-hot, rip-roaring, and super-catchy tunes. Pedal-to-the-metal scorchers off Shadow of the Sword –– like “Total Annihilation”, “Shocked to Death”, and the album’s blazing title track –– are jam-packed with lightning-swift guitar, percussion, and volatile vocals. However, as frantic and furious as those songs are, they’re built on rock-solid melodic bases that swing a giant fucking hook.

The powerful “Path of Destruction” explores Stalker’s more epic creative side –– a domain the band will hopefully survey further in the future. Violent riff-storms, like “Demon Dawn” and the riotous, bass-driven “Master of Mayhem”, blend soaring vocals with breakneck six-string insanity. And an energetic cover of Mantas’ “Evil Dead” fits in perfectly with all the raging music here. (As well as underscoring the visceral creative wellspring that informs much of Shadow of the Sword.) 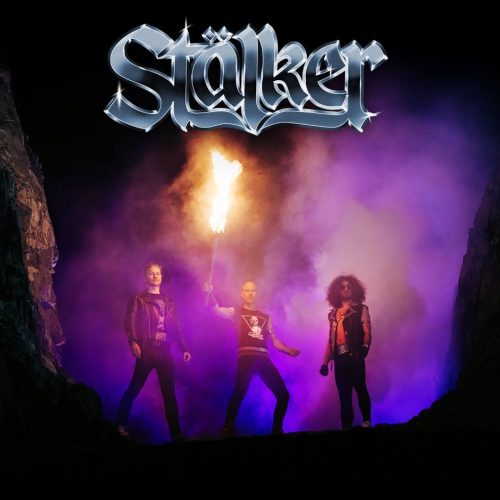 As far as individual performances go, Calavrias’ dive-bombing guitar and whirlwind solos are everywhere –– and his dynamic, fretboard gymnastics are impressive. King’s thickset and relentlessly propulsive bass, which drives many of Shadow of the Sword’s songs forward, also stands out. As does his pitch-perfect sky-high screams.

Oakes’ drumming is frantic, and unrelenting. But it’s also notable that the bulk of Shadow of the Sword was tracked by Vanya Vitali at Wellington’s famed punk rock recording bunker Scumbag College, and then the album was mixed by ex-Diocletian drummer Cam Sinclair (Witchrist, Heresiarch, Bölzer, etc). That mix of punk and metal hones Shadow of the Sword’s sonic edge, which is razor-sharp but also gloriously serrated as well. It’s an evocative mix too. Harking back to when the likes of Venom first injected raw punk into metal. 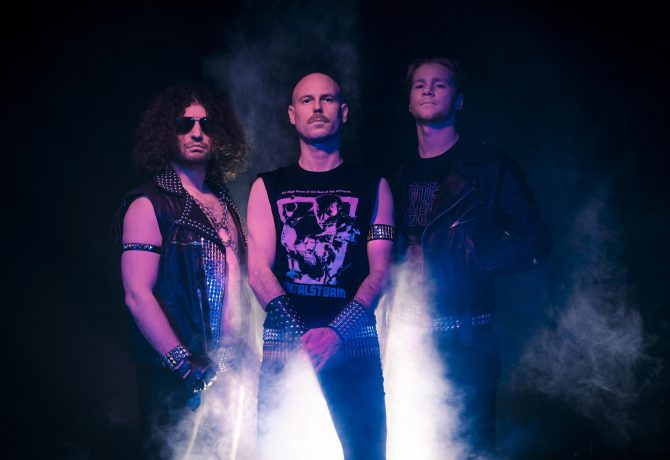 Complaints? Well, none from me. Stalker have the songs, and they’re produced to maximize their punch. The only problem I foresee is that Stalker explicitly deal in arrant speed metal. If you’re looking for something stern, solemn, or progressive, or you’re after ultra-modern or newfangled metal, then Shadow of the Sword isn’t the album for you. It’s a dramatic, throwback release. But it definitely isn’t a rehash.

Shadow of the Sword is a full-throttle celebration of metal’s most captivating attributes, and it’s about as fucking METAL as fucking METAL gets. There’s no question that Stalker have delivered on all that expectation swirling around them, and Shadow of the Sword is one of the most thrilling debuts from the southern hemisphere metal community yet. (FYI: the album will likely do extremely well in Europe too.)

Stalker pay tribute to heavy metal’s exaggerated hallmarks, extolling all those fearless and ferocious characteristics that we love about the genre. Heads will be banged. And necks will be wrecked. Shadow of the Sword demands your attention, and Stalker deserve your respect.

One Response to “STALKER: “SHADOW OF THE SWORD””