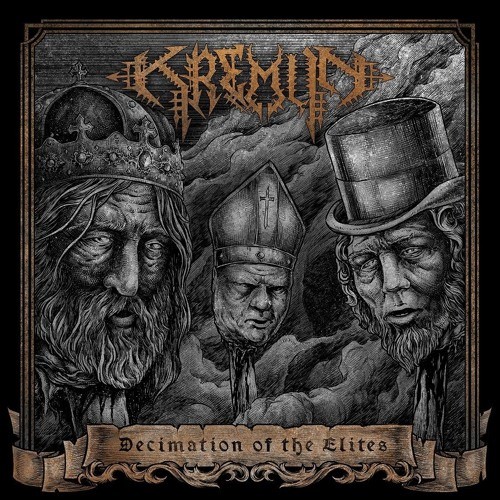 I’m one of those people who needs a regular dose of massive, bone-grinding old-school death metal (with a particular weakness for the Swedish school) in order to avoid the cold sweats and the night terrors, but it’s rare to find a fix that’s as electrifying and as thoroughly unhinged in its ferocity as the new album by Kremlin, the name of which is Decimation of the Elites. It is thus with particularly fiendish pleasure that we present a full stream of the album today, in advance of its November 24 release by Godz Ov War Productions.

Kremlin is a three-man war machine from Canada featuring past/present members of Infernäl Mäjesty and Outre-Tombe, but although a trio they may be, they sound like an army of 300. 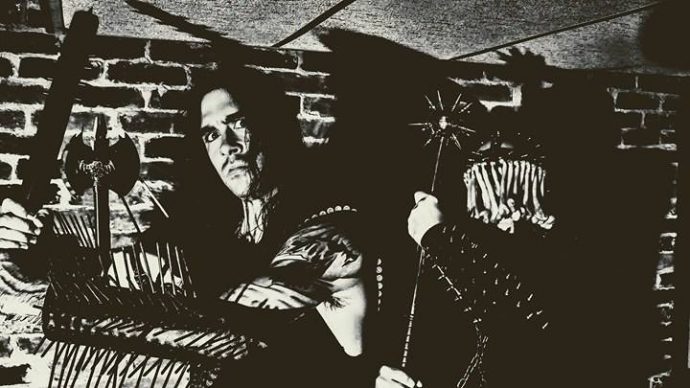 While the music on this new album draws from more than one school of death, the massive, thoroughly corrosive HM-2 tone of the riffing certainly locks arms with that infernally blessed Swedish school. But the songs are also shot through with bursts of vicious, seething frenzy. And while the music is rhythmically dynamic, with sharp twists and turns in the drum rhythms and tempos, this is mainly a fast and stunningly furious assault — relentlessly savage, persistently poisonous, and as destructive as a phalanx of demonic demolition machines.

As utterly barbaric as the music is, Kremlin are efficient in their murderous work, inflicting their sonic slaughter in tracks of compact length. They punch holes in your skull, do their dirty work, and then blast out the other side while you’re still wondering what the hell just happened. It’s an effective strategy. Not only do the individual songs not overstay their welcome, the album as a whole leaves you wanting more.

Although the distortion in the guitar tone and the generally rampaging speed gives the music an inherently ruinous impact, the drum assault has an organic sound, the drummer delivering changing bouts of punishing double-bass, punk-like scampering, cavalry-charge galloping, and rapid-fire, head-snapping snare battering. The album also benefits from gut-punching bass work and lacings of eerie melody.

As good as all this instrumental work and hooky but venomous song-writing is, the vocals are a real stand-out factor in a stand-out album. In the main, they’re raw, insane, bile-spewing howls from a larynx that sounds like it’s regularly marinated in battery acid, often bringing to mind the distinctive bestiality of Martin van Drunen, but they also range into gruesome guttural territory, and even gloomy, wailing clean vocals in the final track, which is one of the few songs where the pacing slows and the melodic accents become truly eerie, oozing decay.

The vocals are perhaps the most explosively unhinged and varied in “Exterminate the Shapeshifters“, which may also be the most rampantly and remorselessly berserk track on the album (but one peppered with a little swirling riff that grabs attention, too). But it’s difficult to pick out any one song as the zenith of brutality on this album. Everything is annihilating, and everything is also a real rush to hear, with plenty of pile-driving, head-bangable moments and bleak melodic currents adding further interest to the primal appeal of Kremlin’s nuclear strafing runs.

Godz Ov War will release Decimation of the Elites exclusively on CD, in a standard jewelcase edition with  12-page booklet. Pre-orders are being accepted now: