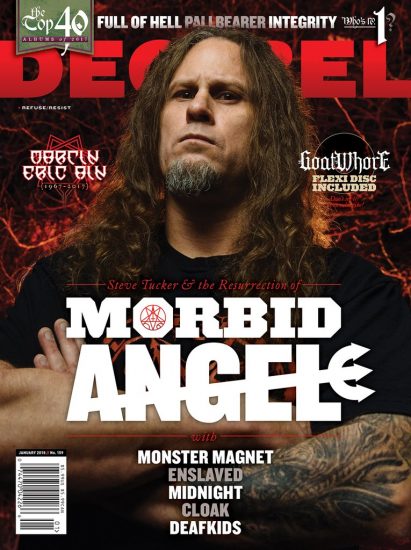 Every year our LISTMANIA series of posts includes not only lists of the year’s best releases as compiled by our staff, invited guests, and our esteemed readers, but also lists assembled by what we call “big platform” web sites and selected print magazines. And every year, it seems that DECIBEL magazine provides the launch for LISTMANIA by coming out with the first of the lists we see from that category of web sites and print zines — and they’ve done it again this year.

I’m a long-time DECIBEL subscriber, but my hard copy of the January edition, which features Steve Tucker on the cover and includes the YE list, hasn’t hit my mailbox yet. However, today DECIBEL provided an on-line teaser for the issue that included their full ranking of the year’s Top 40 albums.

This is the second year in a row that DECIBEL has scooped their own list rather than letting leeches like me do it, and so I can now again re-publish their list without too much guilt. There is of course a lot more content in the January issue, including commentary about each of these 40 albums and why they were selected (you can read everything else DECIBEL has previewed about the January issue here). 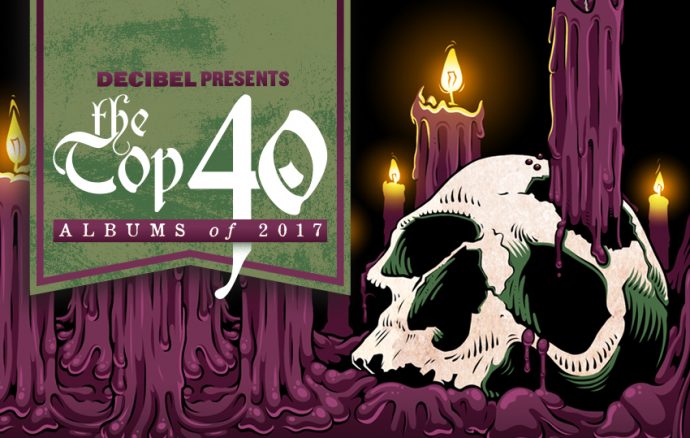 Before turning to the DECIBEL Top 40 I’ll share again the thoughts that I share every year at this time about the phenomenon of year-end lists in metal.

They continue to serve several useful purposes. One, of course, is to introduce fans to albums they may have overlooked. I also know people who don’t buy much music during the year and actually wait to read year-end rankings before preparing their shopping lists. And, perhaps most obviously, they give us something to discuss and argue about. Because, duh, we don’t have enough to argue about already.

I usually try to hold my own comments to a minimum when I post these year-end lists, mainly because I can’t manage to make a list of my own. But here are a few observations about this one, just to get the conversation started.

First, only two of these albums were self-released; all others were backed by labels, although some of them are quite small and obscure.  The two albums that were self-released are those by Napalm Raid and Cormorant, and both of those are certainly deserving of recognition. Among the remaining 38, Profound Lore wins the DECIBEL label sweepstakes with five releases on the list, followed by Nuclear Blast with four, Relapse with three, and two each from Season of Mist, Dark Descent, and Epitaph.

Second, I seem to have heard a greater percentage of the albums on this list than on DECIBEL’s 2016 Top 40. I have no idea what that signifies. Of the ones I haven’t heard, I confess that the one I’m most intrigued about is the one that’s possibly the most obscure appearance here, a Greek black metal band named Wampyrinacht, who released a demo and an EP in 1996 and 1998 and apparently have now resurfaced after almost 20 years of dormancy. There isn’t much obscure (or even not-so-obscure) black metal on the list, but that’s hardly surprising.

Third, as usual, I found some pleasant surprises among the rankings — Integrity appearing at No. 5 and Spirit Adrift at No. 2 are the biggest ones. And, as usual, there are by my lights some odd rankings and some glaring omissions, especially in the category of black metal, but that’s inherent in the nature of year-end lists, especially lists that are the result of some kind of composite of inputs by a multitude of writers. I also realize that with each passing year I tend to fall further and further down into the wormholes of obscurity and become increasingly less interested in the biggest names in the field… simply because they tend to be less surprising.

But fourth, the list does include some of my own 2017 favorites, and I was especially gratified to see Dodecahedron, Bell Witch, Spectral Voice, and Necrot placing in the Top 15. I can also understand the placement of Paradise Lost in the top spot. It’s a combination of an old revered name and an album that struck me as a triumphant return to form, even though it wouldn’t have been my own AOTY. But I don’t know what would have been, if I had actually made an effort to decide.

Anyway, I’ll stop there and let you guys continue the conversation in the Comments. I’m quite sure you have opinions.