(It’s our great pleasure to bring you the full streaming premiere of Umbra, the debut album by the Icelandic band Almyrkvi, preceded by Andy Synn’s review of the album as a fitting introduction to what you will hear. Umbra will be released by Ván Records on November 24th.)

Just over a month ago our benevolent overlord Islander, he who bringeth the rains and maketh the sun to rise, published a post entitled “List-Breakers” asking our readers to select some upcoming late-2017 releases that had a very high likelihood of breaking their way into their AOTY lists come December, while also providing some suggestions of his own to bear in mind.

And one of the albums he highlighted was the one which we’re lucky enough to premiere for you all here today. 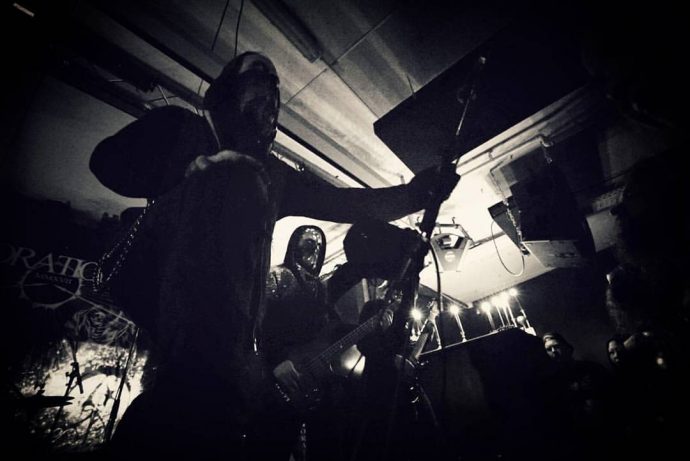 As good as the band’s debut EP, Pupil of the Searing Maelstrom, was (and you can read more about that here if you like) the six tracks which make up Umbra are on another level entirely, so don’t be surprised if you see/hear the name Almyrkvi mentioned amongst the very best which 2017 has to offer once list season kicks in.

Opener “Vaporous Flame”, for example, is nine minutes of cascading blastbeats, sweeping tremolo runs, and ominous, towering chords, all interwoven with a mesmerising array of crystal-clear clean vocals and cavernous growls, and enveloped in an atmospheric aura as bleak and as biting as the empty void, while the ambient temperature of track two, “Forlorn Astral Ruins”, hovers somewhere close to absolute zero, with the constantly clashing waves of melody and dissonance doing little to ward off the cold.

As you might have guessed, Umbra is as dark and as desolate as its name implies, with every track – from the pitch-black doom and gloom of “Severed Pillars of Life” to the brooding malevolence of “Stellar Wind of the Dying Star” and the apocalyptic ebb and flow of “Cimmerian Flame” – bathed in layers of deep shadow and glistening frost, and shot through with icy veins of piercing melody, as if multi-instrumentalist/vocalist Garðar S. Jónsson and drummer Bjarni Einarsson (both also of Icelandic savages Sinmara) seek to capture the very essence of that boundless, endless emptiness which exists just beyond the edges of this fragile, lonely world.

Concluding with the monolithic “Fading Hearts of Umbral Nebulas”, this is the sort of album that positively demands to be listened to as one entire piece of work, such is the obvious passion and creativity that has gone into crafting the overarching atmosphere and ambience which ties every track together.

The only problem is that it’s often so immersive, so utterly antithetical towards life and warmth, that you run the very real risk of developing hypothermia in the process!

Umbra will be released by Ván Records on November 24 on 12″ vinyl and CD. You’ll find a pre-order link below.

In addition, Almyrkvi will soon be participating in the Astral Maledictions 2017 tour of locations in Europe with Sinmara, Sortilegia, and I I. Below our stream of Umbra we’ve included a visually stunning trailer for the tour created by Chariot of Black Moth, as well as a list of the tour dates (it begins on November 30 and concludes on December 10).

4 Responses to “AN NCS ALBUM PREMIERE (AND A REVIEW): ALMYRKVI — “UMBRA””