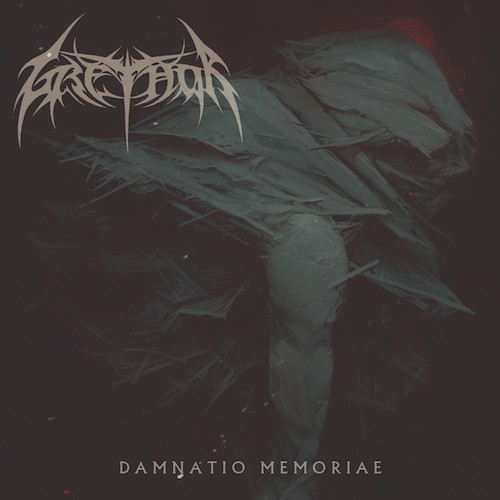 The quality of the music is obviously the most important criterion for assessing a new release, but there is added value when the concept and inspiration for an album teaches you something interesting that you never knew before, and when it features artwork that catches the eye. And the new album by Virginia’s Grethor that’s the source of the song we’re about to premiere scores high in all of those respects.

The album’s name is Damnatio Memoriae, which is Latin for “condemnation of memory“. We’re told that “the Roman Senate adopted this as a form of dishonorable punishment against traitors and criminals who brought shame to the Empire” — a form of punishment which stipulated “that a person must not be remembered”, and one that was “regarded as a fate worse than death”.

And from that historical antecedent, Grethor have crafted lyrical themes that concern “dehumanization, authoritarianism, and the decline of critical thinking”, topics that obviously have continuing relevance in our own age. Regarding the themes of the album, vocalist Marcus Lawrence has commented:

“Religion has always been a tool of oligarchy; it had always been the most effective. Whenever it seemed that we were going to transcend it, the shamanistic class would always be amplified by the oligarchs who needed a compliant labor force…The endless wars, the raping of ecosystems, the genocides all in the name of the benevolence of the ‘Christian Nation.’ If we are allowed to denigrate into whatever our tribal instincts desire, if we insist on only existing in only the reality we choose, then the violence that will follow will be inevitable.”

As for the cover art, it was crafted by the Russian surrealist Anton Semenov, whose creations we have posted frequently in the almost-daily artwork posts we make on the NCS Facebook page.

But now let’s move on to the music.

The Grethor song we’re bringing you today is “Embracing Oblivion“. Like the album as a whole, it is an interweaving of metallic ingredients, with black metal and death metal most prominent in the mix. The song is rhythmically dynamic, technically impressive, and impressively intricate, though with cohesive melodic themes that tie the music together despite its many twists and turns. It also surges with explosive, destructive energy, yet at the same time creates an authentically dark and demented atmosphere.

The melancholy strains of a classical string ensemble launch the track, which then erupts in a rush of hammering drums, a deep bass thrum, swarming riff-work, and a high, trilling guitar lead. As the song unfolds further, it exposes the listener to some attention-grabbing, acrobatic drum clobbering and an array of febrile, darting and screeching leads, along with changes in the riffs that give the song increasingly varied (and brutal) textures, culminating in a flaming yet wraithlike solo.

The vocals are as intense as the music, providing a harrowing blend of gruesome roars, bestial gutturals, and shrieks that seem to emanate from a throat constricted with barbed wire.

One Response to “AN NCS PREMIERE: GRETHOR — “EMBRACING OBLIVION””