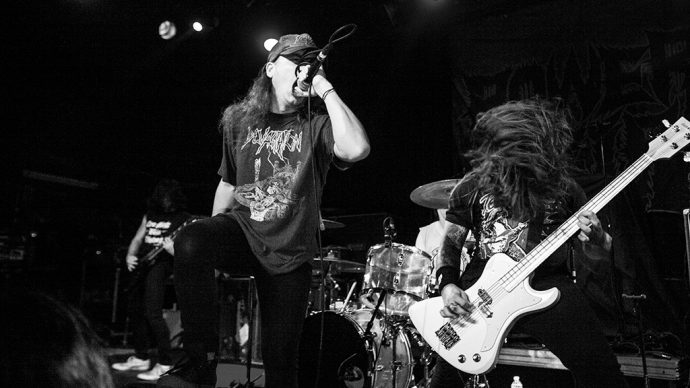 If you happen to be stumbling in here for the first time, I’ll repeat that as part of our LISTMANIA 2017 series, we re-post lists of the year’s best metal that appear in a few selected print zines and on web sites with large cross-genre music audiences.  Today, as in previous years, we’re sharing a list of the “20 Best Albums of 2017” that Revolver magazine published yesterday.

Revolver has undergone a change of ownership since last year’s list, and is now owned by Project M Group LLC. Revolver bills itself as the “Biggest hard-rock and metal magazine in North America”, with a “3x larger subscriber base than next U.S. metal print publication”, and a substantial social media presence  “with over 1B impressions per month across Facebook, Instagram and Twitter”.

A long time ago in a galaxy far, far away, I used to subscribe to Revolver, but a combination of its own drift toward more mainstream and rock-oriented music and my own drift in the opposite direction put an end to that. For years, I’ve included their lists in our LISTMANIA series mainly for shits and giggles.

With the new ownership and the return to the helm of former editor-in-chief Brandon Geist after a stint at Rolling Stone, there were suggestions that Revolver would re-launch with a renewed focus on metal. I can’t comment on whether that has happened because I haven’t been paying attention.

I will say that, by my lights, this year’s Top 20 list from Revolver is a hell of a lot more legit than it has been in a long time. If the trend from past years had continued, I would not have expected to see (for example) the likes of Necrot, Integrity, Amenra, or Power Trip on here (especially with the latter snagging the No. 2 position), and I guess it also reminds me that I need to stop fucking around and listen to the new Tombs and Godflesh records.

Obviously, there’s no black metal on the list (unless you count Tombs) and not much death metal, and Mastodon placed No. 3, and Code Orange got album of the year, so there’s that. But I don’t think anyone who comes to our putrid little site will really be shocked by any of those discoveries, and since I haven’t even listened to the No. 3 and No 1 picks, I guess I should just shut up about those selections.

Here’s the Revolver list; to read their commentary about the selections, go here.

By the way, if you’ve been following us, you’ll know that this is the third list we’ve re-posted, after DECIBEL’s Top 40 and PopMatters’ Top 20. There are now only two albums that have appeared on all three of these lists — the ones by Power Trip and Converge — and there’s no record that appears in the Top 5 of all three lists.