(DGR reviews the debut album by the Greek band Aetherian.)

The genre-realm that skirts the line between doom and melodic death metal is one that has become increasingly crowded over the years, especially as some of the more long-running groups have rocketed up in popularity. The line between the two blurs constantly, and the bands that walk that path have developed into a very recognizable genre grouping in their own right, with bands like Insomnium having quickly moving to the forefront.

The pacing of most of these bands firmly plants them within the melo-death realm, and Greece’s Aetherian with their debut album, The Untamed Wilderness, don’t stray too far from it. 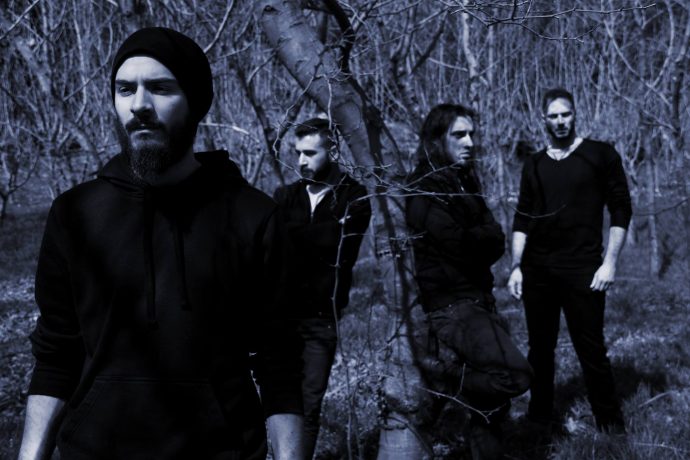 Since releasing their first few songs in 2014, Aetherian have been quick to establish a sound and then slowly hammer away and refine it, resulting in the 2015 EP Tales Of Our Times. The five songs present showed a ton of promise for the future of the band, and the end of November finally saw the release of The Untamed Wilderness, a debut that largely expands upon the concepts present within Tales Of Our Times while still managing to pack in a few surprises within its dense track-listing.

The Untamed Wilderness picks up right where Tales Of Our Times left off, a clear progression from EP to full expanded album. Multiple songs across The Untamed Wilderness clear the five-minute mark easily, and the opening two songs, “Wish Of Autumn Twilight” and “Dark Earth”, are amongst a handful of seven-plus minute tracks, meaning they’ve lodged a couple of moodier doom opuses among the faster-moving songs.

“Wish Of Autumn Twilight” as an album opening is an impressive entry point, feeling like a guide to Aetherian, with a pleasant surprise at the end that sees the song moving from the cold and melancholy to a near high-speed, atmospheric black metal minute or so filled with blasts and a hefty amount of anguished screaming.

Bassist/Vocalist Panos Leakos makes good usage of the doom-heavy segments of “Wish Of Autumn Twilight”, and you can pick up on the cross-over between his other, slower-moving doom project Mist Of Nihil (itself a big fan of the euro-doom aesthetic) and Aetherian’s tendency to pick up the pace.

While the opening two songs of The Untamed Wilderness may be the longer epics, most of Aetherian’s songwriting this time errs on the quicker side. The batch of five-minute songs that makes up most of the tracklist are the faster ones; it just so happens that Aetherian really like to travel across vast expanses with their music, so the songs get a little lengthy.

“Dark Earth”, one of the previously mentioned seven-minute epics, is more at home with its quicker-moving brethren on the album than it would be with its direct sibling in the song that precedes it. It opens fast and stays that way for much of its duration. Following right after “Wish Of Autumn Twilight’s” heavier-than-hell closing bit — complete with gutteral death vocals — “Dark Earth” blasts right in and keeps the tempo high, which persists through a healthy segment of The Untamed Wilderness that follows.

“Black Sails”, for instance, is one of the closest songs on the album to the more traditional ideals of the melo-death/doom hybrids, and even then, the oddly martial drum beat and stuttering guitar that make up some of its faster verse rhythms keeps “Black Sails” fairly dynamic.

A big chunk of Aetherian’s genre descriptor comes courtesy of vocalist Panos Leakos’ hoarse, yelled vocals, which are prominent and directly up-front for any time he’s at the microphone — sometimes to the detriment of The Untamed Wilderness, as it tends to bury the music behind it, which is rough, given that a large foundation of Aetherian’s sound is that the band are expert melody-writers, and more often than not are nailing it to the wall on that front throughout the disc.

Any segment where Aetherian slows down and he’s up front, is when the band slowly morphs their atmosphere into the prettier euro-doom segment of their music. A song like “Seeds Of Deception” is prone to switching between the two with a drop of a hat, accompanied by an unfortunately slightly buried guitar lead that is absolutely gorgeous.

“Seeds” dances between quicker movements filled with the classic breathless one-two-one-two-one-two delivery and a heftier chugging rhythm section in its halfway point, to a slow and gorgeous closing melodic segment that, when given the chance to breathe, allows “Seeds Of Deception” to be one of the standout tracks on the album.

That’s not to say that The Untamed Wilderness is completely free of some the usual tropes of this style, as Aetherian are well-educated in their branch of genre-fare, and let’s be honest, they’re executing upon that knowledge to the nth degree here.

So yes, The Untamed Wilderness has a rain song, appropriately titled “The Rain”, because you are not allowed to have any hint of melancholy or misery on your album without some sort of reference to rain. It’s actually led into by an acoustic instrumental piece — with some string backing — entitled “Clouds Gathering”, so the two are entwined as one large epic.

Despite our joking bullshit though, “The Rain” is actually one of the highlights of The Untamed Wilderness and listening to it, you can understand why Aetherian chose it as one of the album’s lead-off songs. It is 5:43 of atmospheric guitar work layered over one another and different rhythms seeking to pain the listener’s visions with moody grey skies, downpours, and the cold forest that the band have portrayed on their album art.

“The Rain’s” closing segment, especially, will prove familiar to those listeners steeped in Aetherian’s sphere of influence, but it’s not a difficult reach to say that it still works, closing out on the same quiet guitar and stringed-instruments grouping that led into it from “Clouds Gathering”.

Aetherian don’t stray too outside their chosen genre influences for this debut full-length, instead choosing to use that framework to construct nine tracks that sail and soar through the cold worlds of misery, at times throwing the occasional surprise at you, but for the most part sticking to what they know best. Aetherian do some traveling along their nine songs, and the deviations from the more recognizable fare — like the chugging, stuttering, lightly Meshuggah-esque guitar rhythm that pops up in album closer “The Path”, which is the only time you’ll see that statement used for this type of band as well as this album, are part of what keeps The Untamed Wilderness interesting and dynamic.

If Aetherian had just stuck to their colder melodeath flavors, it would have been a good disc, but also one that you would have known in its moment-to-moment beats by the time you wrapped up song one. Instead, Aetherian seem to have known this, and while the path is still a recognizable one to walk down, they elevate the experience to a great disc each time they decide to travel a bit before looping back to another gorgeous guitar section.

With just an EP, a few singles, and now one album to their name, Aetherian are already making a strong case as a group to keep an ear out for. The Untamed Wilderness, as the band’s first full-length, demonstrates that that they’re already experts in this moodier branch of melodeath, and it will be interesting to see where they go from here.

2 Responses to “AETHERIAN: “THE UNTAMED WILDERNESS””