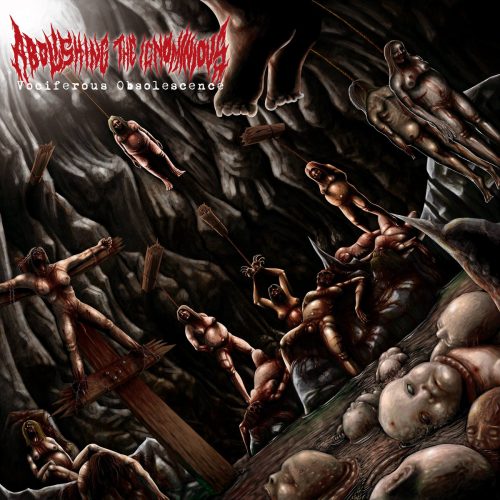 (Vonlughlio has brought us the premiere of a full stream of the debut album by the Pittsburgh technical brutal death metal band Abolishing the Ignominious, with his words of introduction.)

It’s been a while since I did a small write-up for NCS but I could not pass the opportunity to talk about the band Abolishing the Ignominious and their upcoming debut album Vociferous Obsolescence released via Coyote Records.

One I could not pass up the opportunity is the identity of the band’s members: The group consists of Joseph Luciano (ex-Animals Killing People, Andromorphus Rexalia, Injurious, Disgruntled Anthropophagi, Manipulated Calamity), in charge of drums, bass, and guitars, and Eston Browne (ex-Animals Killing People, ex-Humanity Falls, ex-Gigan, ex-Merciless Mutilation) in charge of vocals and lyrics. Both musicians are very talented and I have been a fan of their work in the other projects mentioned above.

Based on the members’ other projects I had some idea of what to expect, but one never knows, and I was actually nervous until they released their promo song, “Born into False Exaltation”. That song not only confirmed what I expected but went above my expectations.

At that time the only information I had about this new project was that it was formed in 2016 and was based in Pittsburgh, Pennsylvania, so I decided to contact Eston Browne to talk about the band. I will share below two questions and answers out of that conversation, which represent what the lyrical content and influences are.

What are the lyricial themes in your new album and what subjects inspired you for ideas?

Mr. Browne: The lyrical Theme for Vociferous Obsolescence is misanthropy and hatred. It is a very common theme in death metal but it’s inspired by current events in our day and age and takes a more first-person view.

Looking at it from inside out, the lyrics for our single “Born into False Exaltation” set the trend. It’s about how in our society, children are often born and praised and grow up having a false sense of security and reality and as result grow up violent and dysfunctional as adults. The artwork follows that trend, as do the lyrics for “Animosity Path” and “Tormenting Depression”.

What bands would you say influenced the sound of the band?

Mr. Browne: Vocally and collectively, I would say Disgorge, Malignancy, and Immolation.

After this, I was able to listen to the entire album, and you can indeed hear some of the influence of the above-mentioned bands, but I have to say that Abolishing the Ignominious were able to create their own signature.

The length of the songs on the album are not common in BDM, but in this case the song-lengths work — there are no dull moments on the album whatsoever. The music is also not as fast-paced as in more typical  BDM releases, thought it has its moments within some of the songs.

As expected, Mr. Luciano did a great job in the drum department with his addictive blast-beats, and this work with the guitar and bass are well executed. Those aspects of the music go hand in hand and are a vital essence for this release, and the production enhances both the Brutal and Death elements present within the music.

Eston Browne’s vocals are another strength of the music. They make you feel as if he listened to the instrumental tracks over and over until the patterns of his words fit perfectly; they make this musical journey of hate quite vivid and all-encompassing.

So, without further ado, here is the official stream of the debut album of Abolishing the Ignominious. It’s a very strong debut, and hopefully they will continue to grace us with more music.