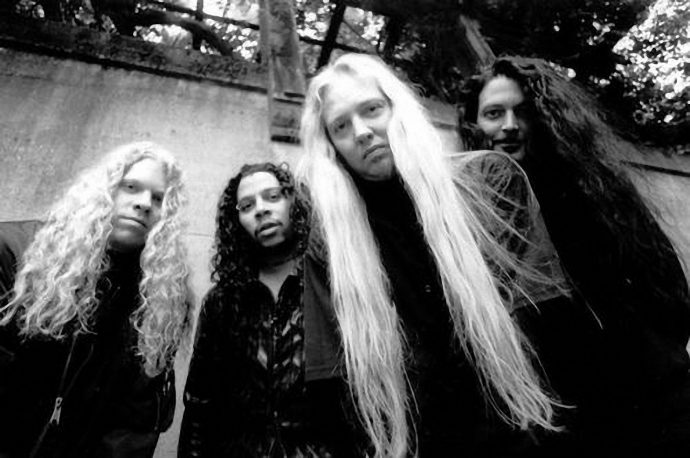 (Andy Synn wrote this installment of his occasional series about things that come in fives.)

As you’ll no doubt be aware, a little over a week ago saw the sudden and untimely demise of Sanctuary/ex-Nevermore vocalist Warrel Dane.

And while this is, assuredly, a heavy blow indeed for his friends and loved ones, it’s also a loss for the Metal scene as a whole, since I would contend that Dane was, without doubt, one of the most unique and distinctive singers (not to mention lyricists) of the past twenty years.

His death also means that the long hoped for Nevermore reunion will never happen and, even though there was some lingering bad blood between them, I’m sure that his ex-bandmates (Loomis, Sheppard, and Williams) must still be reeling from the shock of his passing.

So, having given things a little bit of time to settle (I didn’t want us to be accused of “cashing in” on his death, or anything like that) I’d like to present you with five of my favourite Nevermore songs, as a minor tribute to Warrel Dane and his remarkable voice.

While there were multiple candidates from this album which I could have chosen (in fact there are multiple candidates from all their albums, so that shouldn’t be surprising), this dark pseudo-ballad of moody gothic melodies, rippling acoustic trills, and colossal, doom-laden riffs takes the cake for me, as you can hear every band member pouring every ounce of soul and passion into their performance (though I must admit, it’s Dane’s vocals, particularly as the song builds towards its climax, that really resonate with me).

THE RIVER DRAGON HAS COME

The choice here ultimately came down to “The River Dragon…” or the album’s title-track, both of which are an absolute masterclass in heavy metallic darkness, but in the end the chunky, harmonic-flecked riffs and bleak, despair-fuelled vocal melodies of this one won the day.

It’s not all about Loomis and Dane however (even though the two of them usually get most of the credit and attention), as bassist Jim Sheppard plays an understated, but vital, supporting role in gluing the song together, while Van Williams demonstrates here why he is – to my mind at least – one of the most underappreciated drummers in Metal, with his punishingly heavy, yet cleverly creative, performance behind the kit.

I know a lot of people who haven’t really given Enemies of Reality much of a chance due to the mediocre mix/master it originally received (which was itself due to ongoing wrangling between the band and their label about their contract), but I definitely urge you all to check out the remastered version if you can. It gives the songs the punch and power and depth they deserve, and songs like “Enemies of Reality”, “I, Voyager”, and “Create the Infinite” are easily amongst the hardest, heaviest things the band have ever produced.

But it’s final track “Seed Awakening” that really ups the ante, with Van Williams’ flying feet propelling a sequence of brutally heavy riffs – laced with veins of the band’s signature proggy melody – through four and a half minutes of bruising, brooding, bombastic Heavy fucking Metal at its finest.

I think you could reasonably argue that This Godless Endeavour is one of the best albums of the new millennium, with every member of the band putting in an absolutely career-defining performance on every single track (in fact re-listening to the album for this column has made me appreciate once again what a fantastic performance Van Williams puts in behind the kit – as much as Loomis gets praised for his amazing riffage, Williams is right there keeping up with him throughout).

Of course this made choosing a single song from the record an extremely difficult task, and I went back and forth on my selection a few times – I was very close indeed to going with “Born”, which remains one of the best openers to any album ever in my opinion – but the electric fretwork and absolutely soaring vocals of “My Acid Words” (that build-up in the pre-chorus, leading into the song’s frankly massive chorus refrain, is truly a thing of beauty) just wouldn’t be denied in the end.

And, oh god, that point in the second half where the band bring the heavy, right before Loomis unleashes yet another utterly blistering solo, is just sublime.

SHE COMES IN COLORS

As much as the band’s 2010 swansong was something of a disappointment overall, that doesn’t mean it was a complete write-off, and a handful of its tracks still stack up really well against the rest of the band’s discography.

Chief among them is the unexpectedly dark and punishing “She Comes In Colors”, which initially tricks you into thinking the band have gone the ballad route again, before unleashing a barrage of weaponised riffage and artillery-strength percussion, topped off by one of Dane’s most eloquent and emotive vocal performances.

It’s well worth checking out even if you’d (quite understandably) written off The Obsidian Conspiracy until now.

17 Responses to “FIVE OF MY FAVOURITE… NEVERMORE SONGS”