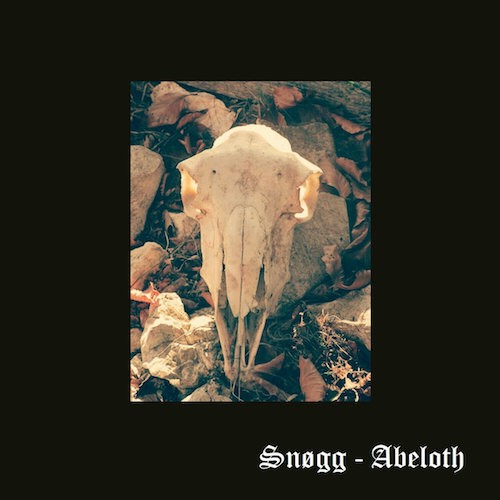 There is something to be said for waiting until the year really is ended before making a year-end list. To take but one example, the EP we’re about to premiere (which could be called an album because of its length) is being released digitally tomorrow — the 25th of December, less than a week before 2017 is interred in the tomb of calendar time — and if I had already made a list of the year’s best EPs, I would have to revise it to make a place for Abeloth.

I admit that the learning phenomenon expressed as “recency is primacy” may have something to do with my reaction to this EP, which is the latest release by the Slovenian black metal duo Snøgg. But I suspect that if I had first heard it on January 1, 2017, I would still be revisiting it here in December — because it’s completely fascinating.

The compositional history of the song is also fascinating. 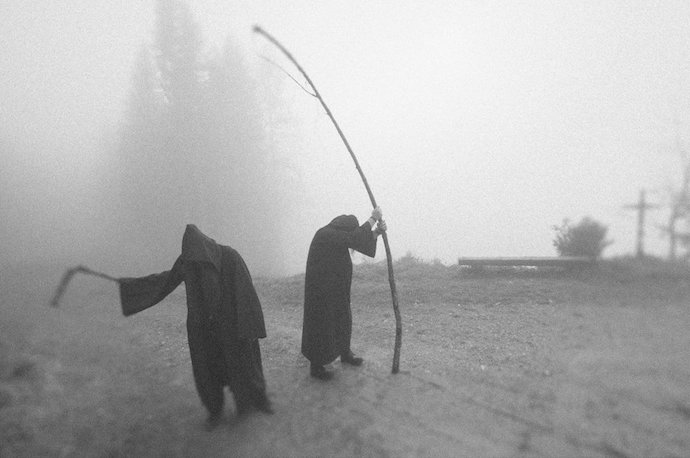 Abeloth is a name that will be familiar to students of the Star Wars canon, and the EP is a conceptual piece originally inspired by that immensely powerful immortal being, who both drank from the Well of Power and bathed in the Pool of Knowledge. Abeloth is organized in movements, which on this recording are manifested in three tracks — “The Servant – The Mother”, “Beloved Queen of the Stars”, and “Bringer of Chaos” — all of which are names by which Abeloth was known at different points in her long life.

Abeloth first took shape as an experimental, improvisational live performance at Brno Noisefest in October 2016, and the music changed as it was performed live again on two subsequent occasions, the last of which was in Maribor in November 2016. Among other changes, the band added the dark poetry of Georg Trakl to the themes from the Star Wars legend of Abeloth. As Snøgg explain, “Abeloth is one of the most powerful dark beings in the universe and the lyrics tell the weird and twisted perspective of her view of the world spoken through Trakl’s mouth. They come in three languages, Slovenian, German and English, as Abeloth is also known for the ability of being many people at once.”

The cast of guest performers grew in number with each performance as well, and by the final performance Snøgg’s core duo of guitarist/vocalist/keyboardist Ulv (Matej Voglar) and drummer Mørke (Grega Cestnik) were joined on stage by Aninø Üfo Letherbee (a classical orchestral and solo violinist); Køzhl (bass); Neo-Cymex, formerly known as Ampulex Dementor (noisescapes, special fx); and Azbuka (noise, field recordings). All of these performers also participated in the recording of the EP (with Neo-Cymex handling narration), as well as additional vocalist Vråg and guitarist Zeench, who recorded solos for the first track.

We are told that the recording of the tracks for the EP “was done the same way as the concerts, a total improvisation”. 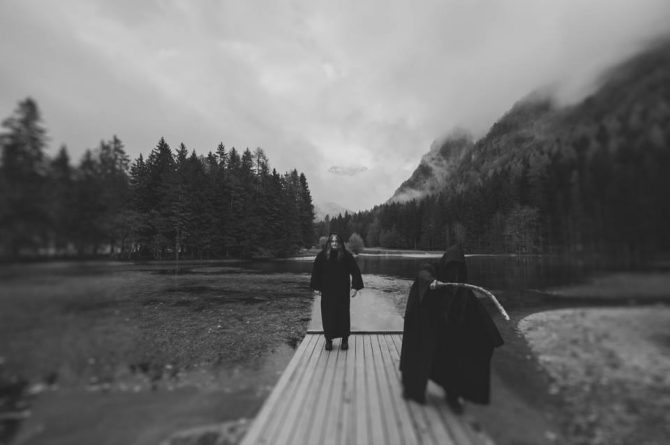 There is indeed an improvisational quality to Abeloth, but also a narrative quality. It unfolds like a musical play, with each track featuring at the outset a distorted voice reciting those lines of dark poetry, and with the intensity (and textural density) of the sounds changing as each track proceeds, tracing the changing existence and experiences of the figure at the heart of the story.

For example, “The Servant – The Mother” is introduced by a haunting opening segment in which mystical tones resembling horns can be heard over the sound of waves washing upon a shore and the rumble of thunder. As the minutes pass, a slow, somber guitar melody and the sorrowful scratch of a violin are introduced, as well as the rhythmic tumbling boom of drums. An abrasive shroud of noise slowly swells in volume as the drum rhythm gradually slows, the music becoming darker and more ominous in its atmosphere.

Almost 8 minutes have passed before a caustic voice begins to rasp and shriek the lyrics and a prominent bass pulse can be heard, and roughly 9 minutes into the track the music accelerates, the rhythmic drive beginning to jab and jolt, the violin becoming more frenzied and whirling, the sonic textures becoming more dense. It’s a head-nodding, adrenaline-fueled change, but at the end a layered, dancing violin duet is what brings the track to an end.

Where “The Servant – The Mother” builds gradually, beginning with a sense of cosmic mystery, “Beloved Queen of the Stars” launches with deep string vibrations and a high, skittering, channel-shifting sound, which in turn are joined by blasting drums, a bubbling bass, and the ear-shredding sound of those caustic vocals. The drums lock into a head-bobbing rhythm, but the music becomes cacophonous, with flurries of punching, somersaulting percussion and scratching, slashing, head-lashing guitar (the violin is in here, too, darting and whirling like a dervish) augmented by the vocalist’s wild, bestial shrieks and cries, which are separated and doubled across the two stereo channels. But this track also includes clean choral vocals resembling a monastic chant.

“Bringer of Chaos“, as its name implies, becomes a hurricane of sound, even though it begins in a way that gets the listener’s head moving again. Those choral vocals appear again, but this time with angelic voices added to the male voices. As the track builds to a crescendo of violence, all the performers attack their instruments with maniacal energy, the drummer in particular executing jaw-dropping feats of speed and athleticism, and the violinist delivering the sound of delirium. After the assault crests, the EP/album is drawn to a close in dramatic, ominous fashion, and in a way that reminds the listener of the music’s improvisational roots.

And when Abeloth does end, your first impulse, as it was mine, may be to go right back to the beginning and re-live the experience. It’s a gripping and often surreal ride, and one that’s so loaded with changing sonic ingredients and interesting twists and turns that one listen isn’t enough to peel back all the layers of this captivating creation. Haunting and harrowing, mesmerizing and violent, forlorn and frantic, pulse-pounding and disorienting — Abeloth is all of these things, and more. The year still isn’t over, but if it were, this would be a hell of a way to end it.

To repeat, Abeloth will be released digitally through Bandcamp tomorrow — December 25th. A CD edition will be come available in January.