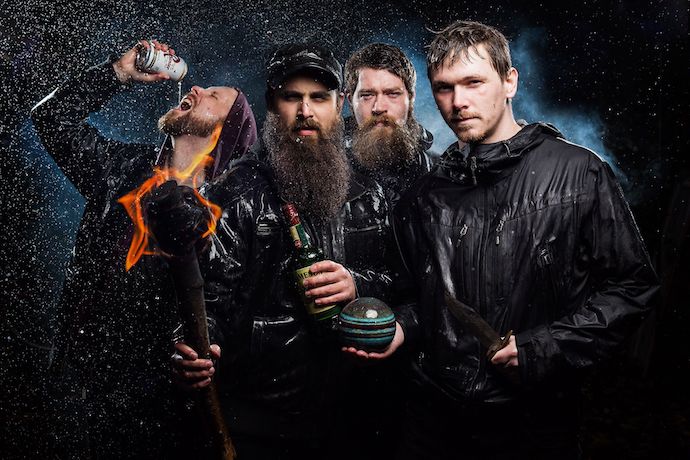 A little more than one year on from their 2016 album Where the Merfalo Roam the sludgy rockers in Seattle’s Into the Storm will be returning in February with a new split album with another Seattle band, Smooth Sailing, and today we have a single from Into the Storm’s side called “Murder, Murder, Murder“.

They do say it three times in the title, but you’d get the picture even if the track were untitled. Based upon the sound alone, this is musical murder with a verve fueled by wild-eyed lust for blood splatter and bone splinters, and perpetrated not with the sneaky sharpness of a stiletto but with the brutalism of crowbars and sledgehammers. It’s an invigorating bruiser of a track for sure.

The song is heavy, head-moving, and bleak — a crushing assault, and slightly creepy, too. The battering and bombardment begin right away, bringing to mind a demolition machine belching riffs that come off like braying blasts of radioactive steam, with a maniac at the controls howling his vituperations in a raw, tortured passion. The bludgeoning (and the volume) does subside, but only to make room for the freakish interplay of clanging chords and reverberating notes, which contrast with the heavy thud of the bass.

And then the clobbering begins anew, this time laced with a slithering guitar lead that radiates anguish as it soars, paving the way for one final bout of pile-driving obliteration.

So, strap on your protective head-gear and punch play below (and be prepared to get punched). For further news about the forthcoming split, watch these spaces: