(Norwegian NCS contributor Gorger, the author of the continuing “Beneath the NCS Radar” series, provides this list of favorite 2017 albums, valiantly but grudgingly attempting to comply with the editor’s request that contributor lists this year be limited to an even 20 selections.)

Ah. Ain’t this the loveliest time of year. Attempting to review releases that’s being tossed at you by Donkey Kong, whilst also trying to decide who’s been naughty, who’s been nice, and who to treat with Yuletide presents, plus what the fuck to get them, and at the same time making an effort at finding out who delivered the most memorable and indisputably best shit throughout the year. Yes, this intro was written before the season flushed over me like a tidal wave.

This year there’s even rules to abide by. A maximum limit of 20 releases has been set by that sadistic autocrat Islander. That’s 1.666666666 (with those 666-decimals continuing ad infinitum) release per month. Now just where the hell am I supposed to find ⅔ of an album each month?

Due to this rule, I’m not allowed to mention such acts as Venenum, Balfor, The Ominous Circle, Zornheym, Caïnan Dawn, Aosoth, et al. As a law-abiding citizen here in Naughty City State, I’ll obey with a suitable portion of lack of respect. If your favourite ain’t on the list, that right there is the main reason. I swear. (I swear a lot. I don’t know what that’s got to do with anything, though.)

Come to think of it, there’s a second reason too. I’ve missed out on a lot of nifty shit, like A Hill to Die Upon, Kreator, Svart Crown, AntropomorphiA, Sinister, Hetroertzen, Paradise Lost, Belphegor and much more.

Oh well. Gorger proudly presents the list to end all lists; a comprehensive and definitive, utterly objective and perfectly accurate list of the best albums released within the confines of metal this very year. All this according to me, with twisted words stolen herefrom. Needless to say, we all have different taste. Just like snowflakes, no two of us will agree 100%. Some not even 5%. That might be a third reason why you don’t find your favorites on this here list.

In fact, not a single soul out there will consider this list to be entirely correct. (Alas, «this confession has meant nothing»)

But trust me. It is! 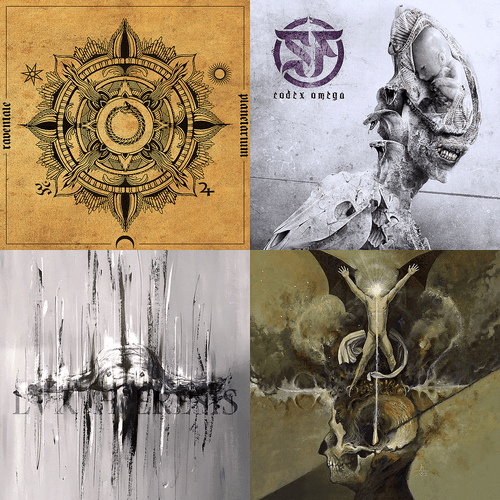 After internal bickering, Ukrainian Raventale occupies this spot with their interstellar sorrow, soaring on black wings.

On 19th place, Septicflesh. Not the very best from the Greek monoliths, but as usual, you can’t go wrong with such a magnificent hybrid of glorious stalwart extreme metal and flamboyant sophisticated classical symphony.

Swiss Lvx Hæresis presents a ripping debut within the confines of occult black metal. Here, the ritual performance from the netherworld oozes with bottled-up anger, aversion, and disgust.

Nightbringer, the Americans with the Greek flair, bestow upon us an unreal occult maelstrom of spiritual black metal with strings swirling like embers in the night sky. But be warned; this abstract multifaceted organism can be difficult to get a firm hold of. 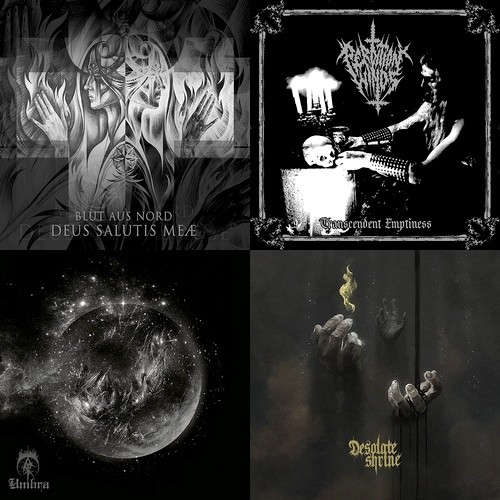 Blut Aus Nord might not peak what originality concerns. Still, they offer totalitarian pitch black dystopia without signs of hope, nor joy. We toast in cyanide and live out our worst sides in collective, asocial, and introverted unity by spinning Deus Salutis Meæ in solitude, in the dim light of a single flickering black candle.

Perdition Winds from Finland deliver primitive, but authentic, honest, heinous, misanthropic and effective black metal. This rightfully glowing hatred ain’t at all ground-breaking, but it works like a fucking charm.

Almyrkvi, the side project of Garðar S. Jónsson from Sinmara, combines asphyxiating moods of ominous nightmares with an astral sphere of unknown origin. On this journey, you will suffer a terrifying and crushing intensity while a stunning ethereal vista burns into your retinas.

«After a few hundred hours of therapy and a renewed faith in life after finally accepting that the visions from the abyss – caused by the previous album – were merely delusions, I am anew thrown into swirling maelstroms of spine-chilling, terrifying horror. May Satan have mercy on me.» – Gorger 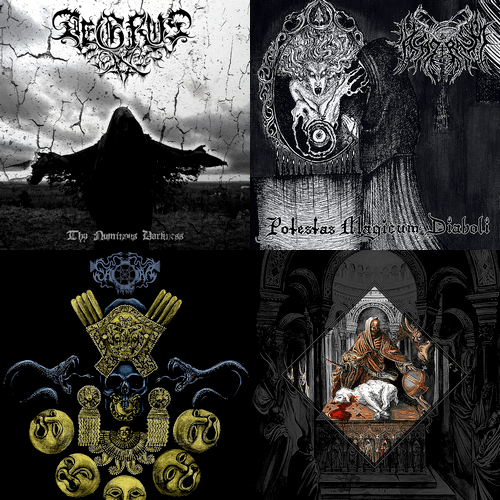 I suspect that this is the magnum opus of Finnish Aegrus. By means of dim moods of depression, hatred, and disgust, and negativity with a whiff of reckless stubbornness, wistful melancholy displayed through exceptionally strong melodic moods, flows in torrential streams. Let’s call my suspicion an educated guess.

Whether or not it’s relevant to mention that Asagraum is a girl-band when they deliver solid ferocity and creepy atmosphere backed by rhythms as of devilish dashing hoofs, is for the individual to decide. In my opinion, it’s only worth addressing because these chicks have conjured up one of the year’s most evil-sounding albums, and that’s a feat worth mentioning.

Saqra’s Cult hail from Belgium. This you will not hear. It sounds, rather, as if the medicine man of a hostile native Indian tribe in the Amazon rainforest – isolated and undetected, still carrying out human sacrifice – has smoked too many strange plants and herbs, gone insane, and transformed into a malign necromantic witch doctor. This black occult ritual stands out well from the rest of the dregs of society.

Norwegian Whoredom Rife delivers Dommedagskvad, or doomsday poems, with adversarial loathing, antagonistic disgust and merciless damnation, draped in pessimistic melancholy, black as frostbitten limbs in boiling tar, meandering like a lava flow through foreign and unknown landscapes. So come sink with me in hypothermicly black waters as the storm blows with unabated intensity and the world ends in a downward spiral into despair and depravity before caving in. 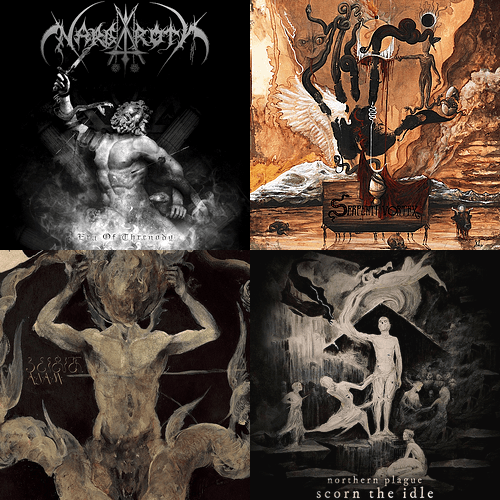 With a long-in-the-making seventh album, German Nargaroth have surprised the shit out of more than just me. The monotonous vokills can be considered a flaw, but it’s the only one. The music is surprisingly sore and woeful, and almost sentimentally moving, yet more often heartbreaking than heartwarming, as traditional black metal is dynamically mixed with elements more common in nature-loving atmospheric black metal. Even acoustic parts, symphonic undertones of violin and choir, plus traditional flamenco, find their natural place in this sincere expression of moody rootless nomadic melancholy.

Ukrainian Kaosophia preach an orthodox form of unconditional satanism. Through a cacophonic battlefield of mitrailleuse and grenades, unrestrained, sadistic, antagonistic disgust is conveyed. But despite the paralyzing inner struggle – this mental short circuit of atonal rusty scalpels, pain and discomfort – a clear but twisted insight, a calmness in an otherwise emotionally numb and warped mind, doth occur. And a higher awareness of meditative escapism is achieved. «We shall all die», the whispering voices insist in an ascertaining demeanor, «so why postpone what is inevitable?»

Begerith, a Russian-born band based in Poland, deliver an exhibition of majestic extreme metal, armed to the teeth with powerful melodies and fanfares of guitars waving as confident medieval pennons in the wind. When digging deeper into A.D.A.M. to uncover any impurity, all I find is an opulent, rich, 24-carat vein of monumental and colossal idolization.

Technically speaking, this is the (technically) best album of the lot. If proficient song-writing, arrangements, structure, transitions, instrumental execution and such technicality were the absolute key musical aspects, Scorn the Idle could easily have been album of the year. The Poles’ extreme metal is a cross between black atmosphere and deadly riffs, harsh vocals and crushing rhythms, powerful punch and majestic sensations. Done with panache! 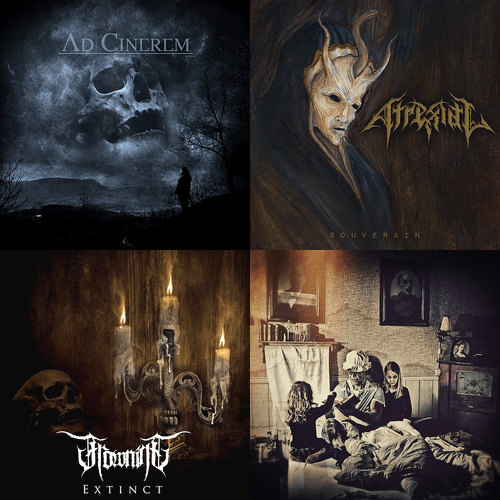 The German duo Ad Cinerem present their ultra-doomed black/death, or blackened funeral death/doom, with a strong flair for melodies and composition. They take us on a dizzying journey through merciless feelings of misery, hopelessness, and disillusionment. Though the atmosphere is dejected and resigned, ominously bitter and disturbingly hateful, the structures of the songs are thoughtfully constructed and the music flows naturally through varied emotional moods. As a bonus, the sound is rich and comfortable with a massive dynamic range. It’s a grower, it’s a debut, and it’s immensely impressive.

Atrexial from the Catalan area of Spain deliver black/death with a theatrical flair and a sense of horror. When black disgust and death’s aggression meet for a head-to-head duel, unimagined fatal forces are unleashed. Dante’s Inferno comes to mind in the midst of this roaring hell-fire, this grotesque pummeling impact of resolute satanic thrust, this vivid firework from Hell.

Frowning‘s Extinct is the second album in my top four inhabited by one Val Atra Niteris, a member also of Ad Cinerem. I could call it a coincidence, but I prefer to take my hat off for this remarkable flair for composing melodies and arrangements. With the same comfortably hypnotic sound, steeped in hopelessness and depressed moods, this delves even deeper into funeral doom to induce its narcotic paralyzing impact. The result is a powerful piece of music where agony and woe are transformed into something poignant and ravishing.

Norwegian Slagmaur have fascinated me from their very offset. Their layered and distorted eeriness creates a distinctively unique atonal signature of claustrophobic horror and nightmarish dystopia. The music twists and turns in alien manners, with textures of noisy mechanical distortion, strange effects, and echoes of anguished choirs of tormented angels. As the spine-chilling distorted dissonance sweeps in cascades over me like a flood of corrosive acids in a chemical warfare genocide, I just have to realize that I find Thill Smitts Terror to be one of the more compelling Slagmaur albums.

Not order, nor picks, are written in stone. I’m still not finished with 2017. Nor will I ever be. Farewell, Medusa, Gods of Violence, Totenritual, et al.

I’m not allowed to include any more releases. But rules are made to be broken. (Just don’t tell Islander.) I have one honorable mention, and I think (hope) you’ll find it worth your time: 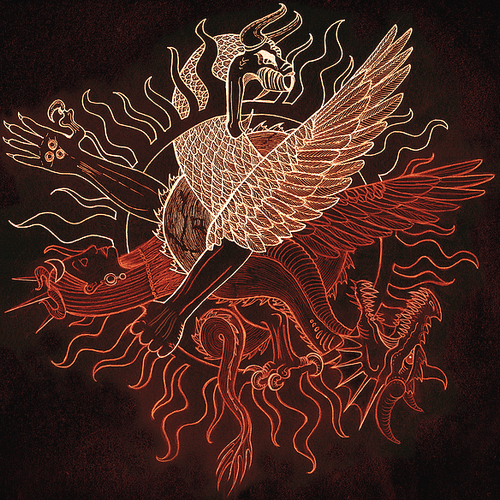 Kohti Kotiani Kaaosta was released in 2016, but not detected by yours truly till almost April 2017. Finnish Deathkin still deserve to be on one of my lists! Those gloomy and deranged moods, performed with flaming disgust, as a marriage of explosive percussion-acceleration with creepy melodies, slow as the morning mist. A marriage made in hell. Resulting in a bastard hybrid child with properties reminiscent of segments of Ajattara, Kuolemanlaakso, Marduk, Eye of Solitude, Shining, Schammasch, and Mephorash. I bet that awoke your curiosity. And feast your eyes on that artwork.

Recommended song: Any one will do, but let’s just say Varttuvista Veren Varjoista

25 Responses to “LISTMANIA 2017: A YEAR-END LIST FROM GORGER (BENEATH THE NCS RADAR)”