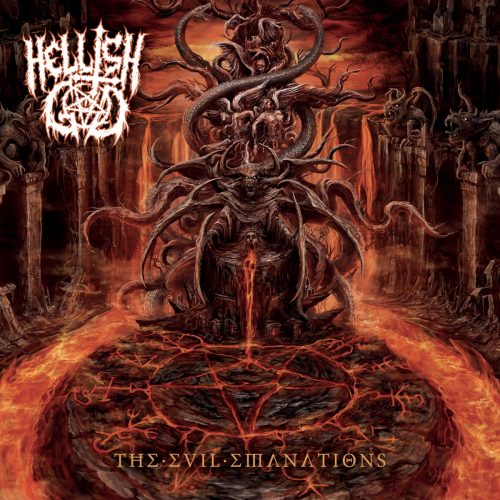 Hellish God may be a relatively new name in the annals of death metal, but one need not be clairvoyant to predict that it’s a name which will spread like wildfire, much like their particular brand of musical brutality blazes like a hellish bonfire. Their debut album is The Evil Emanations, and it’s set for release on Monday, January 8th, by the Italian label Everlasting Spew Records — but we’re giving you a chance to hear all of it today. If you were thinking of blasting your weekend to smithereens and burning what’s left of it to the ground, you’ve come to the right place.

Hellish God’s line-up includes current and former members of such bands as Antropofagus, Imposer, and Mindful Of Pripyat, and this new album (which follows their 2016 EP, Impure Spiritual Forces) is conceptually focused on the Qlipoth — “metaphorical shells which represent evil spiritual forces in the Jewish mysticism”. The music embraces a particular kind of old-school death metal sound that’s recommended for fans of Azarath, Rebaelliun, Centurian, Krisiun, and Abhorrence. 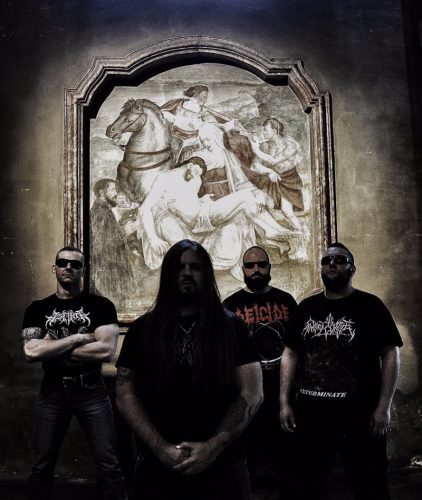 The album consists of 10 tracks of compact length, including an intro track (“Kelim Shattering Illumination”) that sets the stage in mystical and ominous fashion and a brief interlude (“Choronzonic Hellfire”) which sounds like a cacophony of demonic voices. Across the remaining eight tracks, Hellish God display complete (and remorseless) dedication to their chosen methods of sonic violence, deploying similar weaponry to similar breathtaking effect. If you were to close your eyes and throw a dart at the track list, you couldn’t go wrong.

On the other hand, although all of the songs outside of the intro and that interlude could stand alone as ravishing singles, the accumulation of all of them from start to finish makes for a headlong, adrenaline-triggering rush that shouldn’t be missed.

All of the songs are explosions of high-speed ferocity — combinations of battering, thundering drum artillery; a savage mix of jabbing riff chugs and viciously swarming tremolo chords; and a vocal tandem of bestial roars and snarls paired with insane shrieks of cauterizing fire.

In addition to these infernal ingredients, Hellish God segment their torrents of berserker frenzy with blasts of eviscerating groove, braying chords that resemble satanic fanfares, other exotic and reptilian melodic accents that add an atmosphere of horrible grandeur, and a salting of freakishly fast, acetylene-hot solos. The combined effect is music that has plenty of headbangable hooks along with pure blood-lusting barbarism. And the album lasts just long enough to give you a heart-pounding burst of electrification, without overstaying its welcome.

What a hellishly bracing way to start the New Year — full-throttle, fireball death metal that shows no mercy!

The Evil Emanations was recorded and mixed at Toxic Basement Studio by Carlo Altobelli, and was mastered by Fabio Palombi at Blackwave Studio. The cover art was created by by Adi Dechristianize, with layout and graphics by Raoul Mazzero/View From The Coffin.

The album is being released by Everlasting Spew on CD and as a digital download, along with limited t-shirt and lomngsleeve bundles.

One Response to “AN NCS ALBUM PREMIERE (AND A REVIEW): HELLISH GOD — “THE EVIL EMANATIONS””