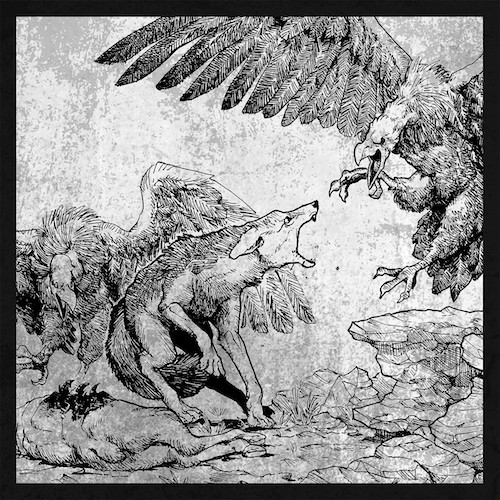 There are no tender mercies on Viscères, the new album by the French maulers in Bind Torture Kill. There is no mercy at all, no prisoners taken, no glass-half-full outlook on the future. But there is staggering power, frightening intensity, and the kind of visceral impact that usually triggers a fight-or-flight response in the average human.

Viscères will be released on January 26th by WOOAAARGH. The label describes the music as “chaotic blackened hardcore”, a charred form of Converge or Trap Them that should also appeal to fans of Baptists, Employed To Serve, God Mother, and The Rodeo Idiot Engine. You can judge for yourselves, because today we present a full stream of the album — preceded by some thoughts of my own. 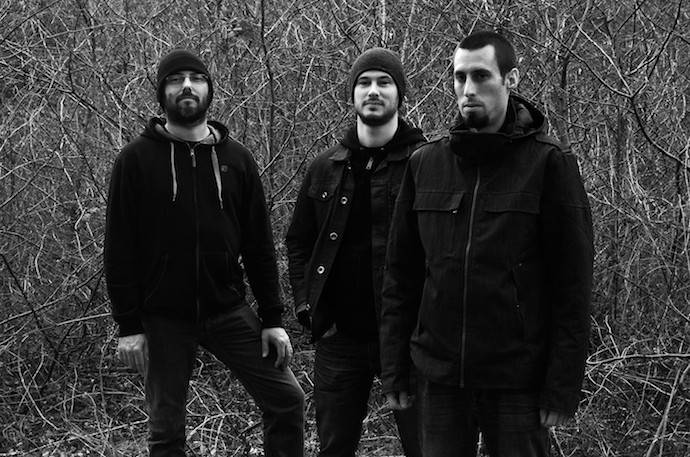 The band’s name alone, the cover art, and the song titles (which, like the lyrics, are in French) provide helpful clues to the music — which is a breathtakingly violent mixture of bone-mangling, gut-busting rhythms, mentally destabilizing guitar flurries, and unhinged vocal fury. Most of the time, it makes you want to dive into a frothing mosh pit or run for the hills like your life depended on it. The rest of the time it’s as bleak and hopeless as a sucking chest wound.

There are only three people in this band — a lone guitarist (Yann Alexandre), a lone drummer (Benjamin Garçon), and a lone wolf vocalist (Olivier Alexandre). But they make an overpowering amount of noise. And although there may be no bassist in this collective, the low-end riffs are thick, meaty, granite-heavy things, and the drummer hits so hard so can feel it in your marrow. In other words, the songs have a bruising, bone-fracturing physicality, which is part of what makes the album so potent.

For much of the album the band are in romping and rampaging mode, but it doesn’t begin that way. The opener “Fléau” is doomed and diseased. It sounds like a slow-moving sonic plague, composed of distorted, reverberating, groaning chords; unsettling feedback, and flashes of guitar dissonance. But after that, things quickly turn violent.

The next three tracks — “Au fond du trou”, “Nourrir le singe”, and “Perte et Fraca” — are jolting and jarring, loaded with skull-rattling percussive explosions, crushing riffs, and explosions of freakish guitar madness. The sound is sometimes as crazed as a pack of rabid hyenas tearing into a fresh carcass, which is an image that might continue coming to mind as you listen to vocalist Olivier’s wild shrieking and roaring. But in the midst of all this mauling mayhem there are some hard-driving grooves; “Perte et Fraca”, in particular, becomes a massive headbanger.

The pace slows at the outset of “Sanguinaire”, but the air of violence is undiminished. The song often resembles bursts of high-caliber automatic weapon fire, or brutish pile-driving, and at other times the buzzing guitar work and unsettling dissonance give it a queasy feeling. “Pestilence” (the album’s longest track) is likewise a mid-paced stomp with a toxic, pestilential melody (and some clean vocals), though the band pick their moments to methodically ramp up into slaughtering gear, and it ends in an effusion of nasty, ear-shredding feedback.

“Maelstrom” provides an instrumental interlude, but brings no relief. In fact, it feels fatally radioactive. And while the last two tracks (“Chacal” and “Abject”) are mainly back to the powerhouse energy and the grim, malignant barbarity of that trio of songs following the opener, “Abject” ultimately draws the album to a close with an oppressive, suffocating crawl.

The whole album is a riveting experience, albeit a very, very dark and devastating one. It gets you in its grip, and it’s not something you soon forget.

Viscères is available for order now. Experience the album stream below, along with the band’s video for”Nourrir le singe”.

2 Responses to “AN NCS ALBUM PREMIERE (AND A REVIEW): BIND TORTURE KILL — “VISCÈRES””