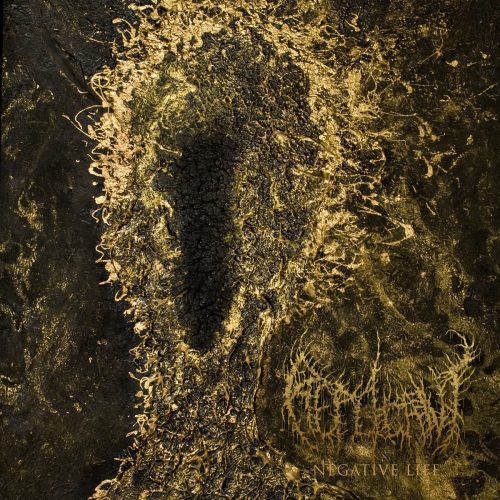 (We present a guest review of the new album by New Jersey’s Replicant, written by Stephen Matthew Schwegler, a member of Pyrrhon, Seputus, and Weeping Sores.)

Being a songwriter in a vastly under-appreciated but densely populated genre, the importance of a strong identity seems, to me, paramount. To be fair, I am biased in the case of the band Replicant. I love single-word band monikers. I love brutal and atonal slamming death metal. I love Pete/Mike/Matty as individuals, and my band has played shows with them numerous times now.

That being said, the creature that is Replicant inhabits a long-missed niche in death metal for me. Concise and elegant, their simplistic namesake tells you everything you need to know about the band before ever hearing the music. 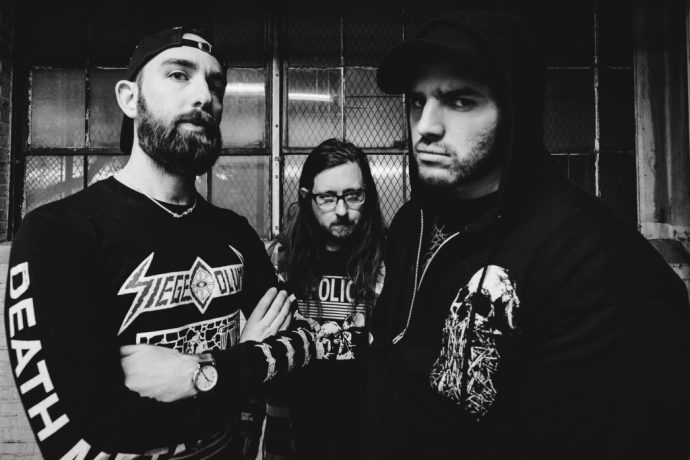 The death metal on display here is unapologetically New Jersey, waving the weathered banners of atonality, groove, catchiness, and humorous (not humorless) brutality. However, this isn’t just the experience of Dim Mak’s kung-fu slams, Ripping Corpse’s wacky-riffed Obituary-vocal gusto, Burnt By The Sun’s game-over blast-laden-hardcore attack, or newer-school fare from doom lords Sunrot and 7-11 necromancy from Dutchguts. It is all of these things and none of them, simultaneously.

Replicant inhabits the land of “cause and effect.” Though you are explicitly confined in the world of a renegade android/Roy Batty-like artificial entity, you are experiencing this existence from behind the eyes of said entity. It is never explicitly mentioned again that “this is about a rogue intelligence malfunctioning and punishing humanity” for existential nightmare fodder. Mike’s lyrics have everything to do with a negative outlook on life, and exhibit specific personality traits while the band skronks out its own universe of cold-technicolor Cyans, infrared Magentas, and alleyway Yellows. Negative Life is astonishingly visual.

The MVP here is undoubtedly Pete Lloyd. His guitar playing, with spasmodic scrapes, dive-bombing, bi-polar lead runs, and harmonic pedal abuse, paints a clear picture of disharmony. His riffs embody the identity of a disaffected, malfunctioning artificial being. Running parallel are feelings of bitterness and zealous joy; the performances on display here are clearly the work of a metal veteran and talented songwriter, harkening back to work in Dystrophy and Painted Rust, both under-appreciated talents that perished before their time.

The drums deliver a natural-sounding and adorably sloppy (read: fun) performance, highlighting the absolutely filthy nether-programming of the bass tones. The vocals are reminiscent of big Steeve Hurdle in his Obscura glory days, baring the tone of vocal cords peeling oxidation off the neglected carcasses of technology.

I mentioned earlier that Replicant inhabits the land of “cause and effect”. Upon listening to a majority of their songs, gaps of micro-ambient silence between prominent compositions are readily apparent. Those pauses ring purposefully; there is no need to commit to grindcore length songs here, because it is all careful calculus. Silence can be highly effective in a song to simulate a moment of pause in a protagonist. In these cases, you can feel the exchange of binary data reasoning within the circuits of these sound gaps. “I should not have existed. A grand mistake has been made, and it is unforgivable. Humanity has to go.” You can almost feel the dirt-clogged avenues beneath your feet as artificial life plods onward, its wheels turning decisively.

What I’m trying to say is, when this album comes out, buy this shit and listen to it. Negative Life is a cinematic-level experience that takes me by the hand and guides me through the rough and tumble walk of death metal fervor. Negative Life isn’t just badass, it’s pretty damn clever as well. Put yourself in Roy Batty’s porcelain-alloy kicks and ask yourself, “How would you feel?”

Negative Life will be released on CD via PRC Music and digitally by the band on March 23rd. Pre-order links are below. To hear the first advance track from the album, which premiered exclusively at DECIBEL, go HERE.