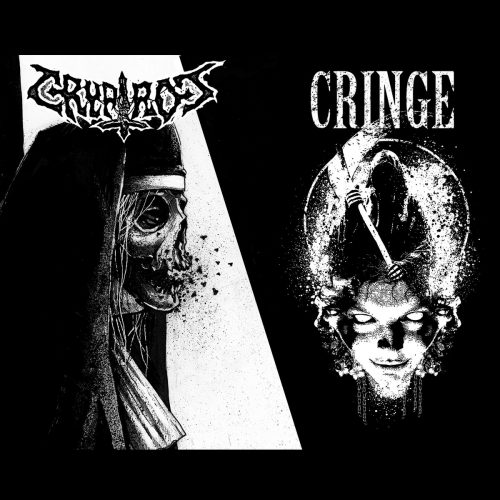 Those two bands are participating in a new split consisting of an EP from each group — Nocturnal Deterioration from Crypt Rot, and Memento Mori from Cringe. The split will be jointly released as a digital download on  February 9 and in a cassette tape edition on February 23 by the sibling labels Redefining Darkness Records and Seeing Red Records. Today we’re bringing you the premiere of a song by each band from this hell-raising split. 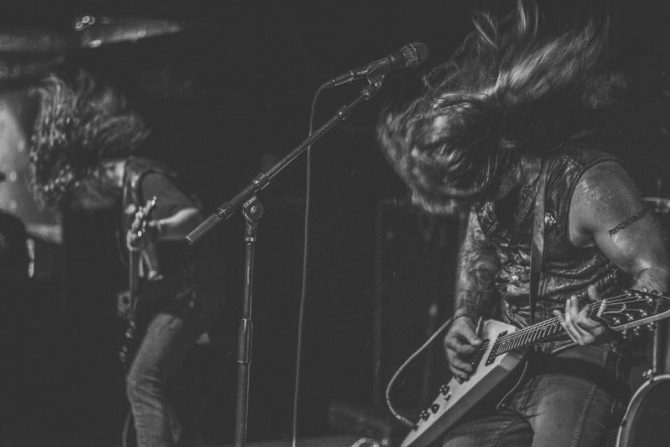 Crypt Rot’s debut EP Embryonic Devils was released by Southern Lord last year, to considerable acclaim. I added my own somewhat demented acclaim when we premiered a full stream of the album:

“The music on the album is a head-wrecking horror, but the album title could be misleading. These are not embryonic devils. Both Crypt Rot and their songs are full-grown, fully formed devils with a monstrous capacity for spreading pestilence, destruction, and an atmosphere of paranormal terror and derangement.

“Because I’m a slobbering, slavish fan of old school Swedish death metal, Embryonic Devils lit me up like a gasoline-soaked torch. The riffs have that massive, corrosive, toxic sound that one associates with the style, and with the aid of a skull-cracking rhythm section, they’re used to hurl the listener into a war zone, mixing barrages of automatic weapons fire and crushing tank attacks — and occasionally devolving into a doomed stagger. Punk and hardcore influence the music as well, with d-beat romps and brutish hammering scattered among the tracks.”

No wonder, I was almost feverishly eager to hear Crypt Rot’s tracks on this split, of which there are two — “Butchered Slumber” and the one we’ve got for you today, “Serpentine Atonement“. Both are tremendously good.

“Serpentine Atonement” becomes a total adrenaline rush, though it doesn’t immediately start that way. There’s a two-minute long introductory section leading up to the surge, but that section is worth the price of admission all by itself. It builds from the reverberation of flickering, crystalline guitar notes and warm bass tones to the onset of massive, craggy chords and skull-cleaving drum detonations. And then the real serious shelling begins, with an onslaught of battering drum work and a swarm of abrasive, HM-2 guitar savagery, augmented by wild, raw-throated howling and flamethrowing solo work.

The band’s punk proclivities surface when the rhythm changes to a mosh-worthy rampage, and the music changes again when they move into a stop-start progression with surprising snippets of clean vocals filling the spaces (though not so surprising if you’re familiar with Embryonic Devils). Preceded by seriously head-hammering rhythm work, the song’s grand finale is just as arresting as the intro, at first slow and morbid, with an elevated clean singing voice trading off with the harsh one, and then a big closing adrenaline rush that pulls everything together. 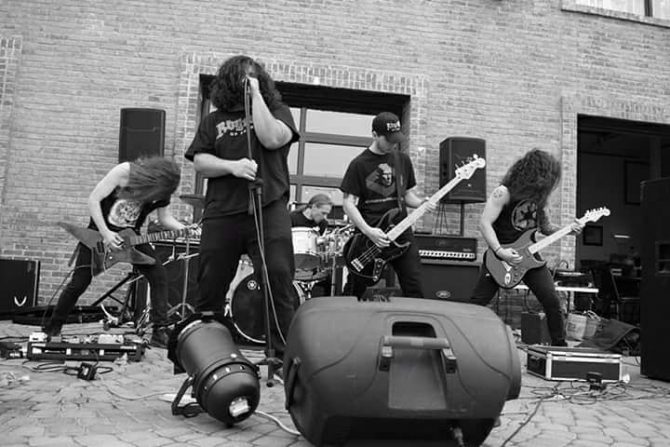 Cringe face some serious competition from those Crypt Rot tracks, but they don’t back down. They’ve brought three tracks to this split under the title Memento Mori, which was preceded by their self-released debut, Through the Mist.

Cringe share some punk and hardcore influences with Crypt Rot (as well as a savage attitude), but their attack comes more from the thrash and groove side of the extremity spectrum. The song we’ve got for you, “Searing Sin“, is composed of near-constantly changing rhythms, but all of them produce a primal, feral impact on whatever part of the brain makes your body move reflexively when triggered.

This particular piece of reflexive compulsiveness begins with a rush of seething guitar over a d-beat drive-train, and then begins to switch gears over and over again, rocking and jabbing and romping, while the vocalist utters his wretched howls in bleeding edge, throat-scraping tones. There are some scintillating guitar solos in the song as well, with an anguished but electrifying feel to them.

And this track isn’t an outlier — the other two Cringe tracks are also hell on wheels.

P.S. In support of this new EP, Cringe will be embarking on a spring tour, and we’ve included a tour trailer in video form right after our stream of “Searing Sin“. For updates about the schedule, check the band’s Facebook page.