I’m continuing to parcel out new and newly discovered music as time permits today, almost all of it displaying cyclonic ferocity in different ways, hence my decision to give the “SEEN AND HEARD” title a rest in favor of something more connected to the sounds.

We’ve been writing about Pennsylvania’s Rivers of Nihil since January 2012. I count 14 posts featuring them since then, including album reviews, song premieres, and live concert reviews. I guess you could say we’re fans. And now they’ve given us a reason to add Post No. 15 to the list.

On March 16, the band will release a new album entitled Where Owls Know My Name, and today the first advance track from the album appeared on Bandcamp. “The Silent Life” is the song’s name, but it isn’t a quiet and contemplative piece of music… though surely no one would have expected that anyway. 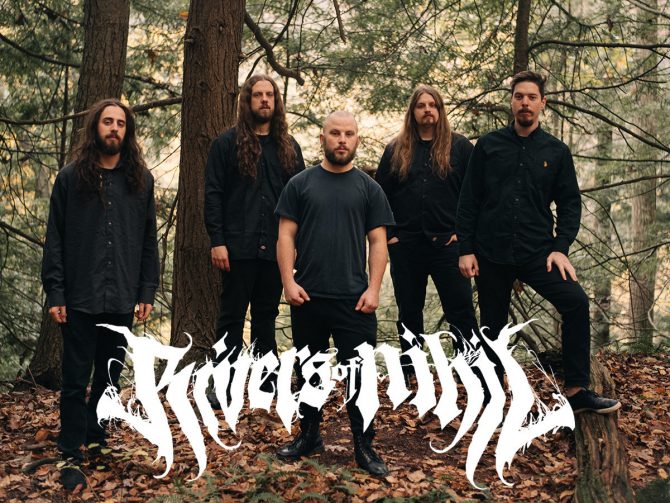 The song metes out a merciless and methodical pounding, with the brute-force trauma leavened with bursts of pulsating and gliding melody, eruptions of warlike percussive fury, and throat-lacerating vocal vehemence. In the song’s mid-section, it becomes something quite different, something mesmerizing and dreamlike… something built around a soulful saxophone-and-bass duet, which segues into an attention-grabbing solo that in turn leads to an even more incinerating explosion of sound than has come before.

What a multi-faceted and electrifying song this is! (And the cover art is very cool as well.) Welcome back, Rivers of Nihil. 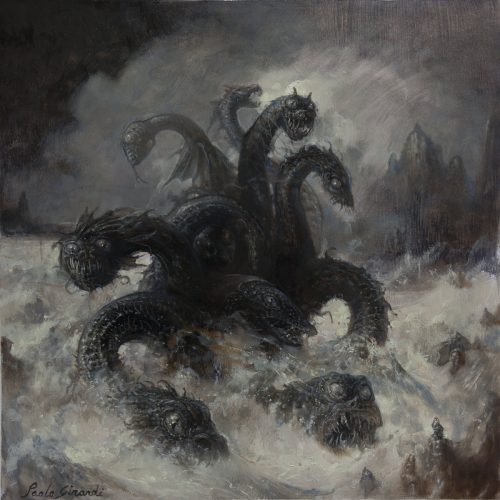 Those of you who follow our daily artwork posts on the NCS Facebook page saw this eye-catching artwork by the Italian maestro Paolo Girardi up there yesterday. It’s the cover of a debut album named Overwhelming Chaos by the Italian death metal band Uncreation, which was released on January 27th.

It is, of course, nothing new to see an extreme metal band selecting an album title that conveys a concept of chaos and barbarism, and it’s also not unusual to discover that the music doesn’t always merit the label. In this case, the album title is 100% accurate.

You’ll understand what I mean as soon as you listen to the album’s opening track, “Dissolution of Being“. There’s a neck-cracking snare-drum snap in the song. Surrounding it is a completely savage storm of brutality. The riffing is cold-eyed and vicious. The grooves in the song are heavy and hard enough to rock you back on your heels. The vocals are monstrous and sound authentically insane. It’s a vivid summoning of chaos, though it’s razor-sharp in its execution and dynamic in its pacing… and it proves to be damned catchy, too.

There are seven more tracks on the album. With more time, I would have written more about them, but hopefully this small introduction will lead you to explore it on your own without further linguistic enticements. I’ll just say that the opening song isn’t an outlier — the whole album is staggeringly good (and scary as hell).

According to Domedag’s Bandcamp page, the band is a music project started in 2003 by Swedish musician Nicklas Rudolfsson. The song you’ll find below is a single released at the end of last year named “Nu Nalkas Ragnarök“, which will appear on a debut album projected for release at some point later this year. The album will be a combination of a new EP consisting of three new songs and an intro, and a remixed version of the band’s first EP, 2016’s Domedagen.

“Nu Nalkas Ragnarök” sounds like an engine turning over when it begins… a big rumbling engine belching toxic fumes. The drums hammer like huge pistons; the thoroughly grim riffs rumble the guts; Rudolfsson’s throat emits a gruesome growl and then solemn chant-like intonations and gloomy wails; streamers of melody loft overhead and buzz like monstrous flies in a charnel house. An amalgam of black, death, and doom metal, the music will put your throat in its powerful talons and squeeze…. In other words, it’s damned good.

(Thanks to DaNasher for recommending this single to me.)