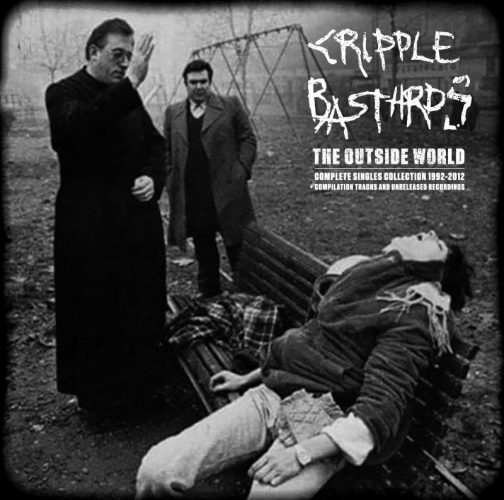 Very few grindcore bands have lived as long, or have been as influential, or have remained as true to the genre’s roots as Italy’s Cripple Bastards. In this year, they celebrate their 30th anniversary, and one way in which they’re doing that is through the release of a monster box set of music that in itself has been years in the making. Entitled The Outside World, it’s a collection worth investigating by any die-hard grind fanatic, not only as a historical “document” but also because the music has remained relevant and powerful straight up through today. And at the end of this post we have streams of a couple of songs to prove that.

The discography of Cripple Bastards includes a vast number of singles and EPs (the reason for which we’ll come to in a moment), and this box set includes all of them in one place — every single non-album track, including those which appeared on compilations, that the band has recorded since 1988. Equally significant, the recordings have been retrieved from their original archived sources (the original reels, DAT tapes, etc.) and remastered to provide maximum sound quality.

The box set also includes a lot of other rare and previously unreleased material, including songs from a 2003 studio session, rare demos, and live tracks. All told, the collection includes 362 tracks (!) housed in five LPs and two CDs, accompanied by a lyrics book and a photos book. 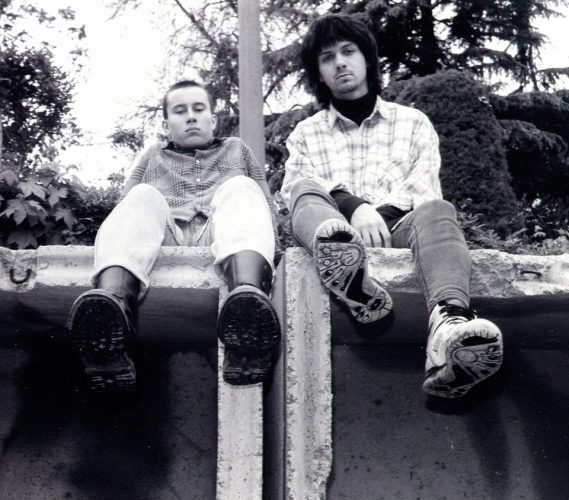 Last week DECIBEL magazine’s Shawn Macomber took a stroll down “a viscera-strewn memory lane” with the band’s drummer/vocalist Giulio the Bastard. The interview (here) revealed, among many other interesting items, that Cripple Bastards was formed when Giulio was only 13 and guitarist Alberto the Crippler was 17. As Giulio explained:

“We were school kids and had no cash at all, so most of our early recordings were totally low budget and DIY. We could not afford to enter a studio and record a full length album. So after doing several demo tapes, we found our ideal dimension in 7-inch EPs—mostly shared as splits with other bands—because the game was to release five to six minutes of noise per side and the underground labels of the time weren’t much pretentious about getting some ultra-produced shit so we put together our own self made rehearsal room, a mixer, a cassette deck and some microphones, improved the skills and created that very specific sound that was so peculiar on our early records.”

And so singles became an important way for the band to record and distribute their music, and by selling the free copies they got from each release, they eventually saved enough money to record their debut album. In reflecting on the persistence and ascendence of grind over a 30-year stretch, Giulio commented:

“Grindcore has been something unique and outstanding for us and we have always tried to keep it going with the same spirit that got us into it when it started and motivated us through all this time. We wanted to play the fastest and most extreme shit on Earth and vent out hate and inner violence in the most uncompromised and nihilistic way, and that’s what we found in Grindcore and how we have always seen it.” 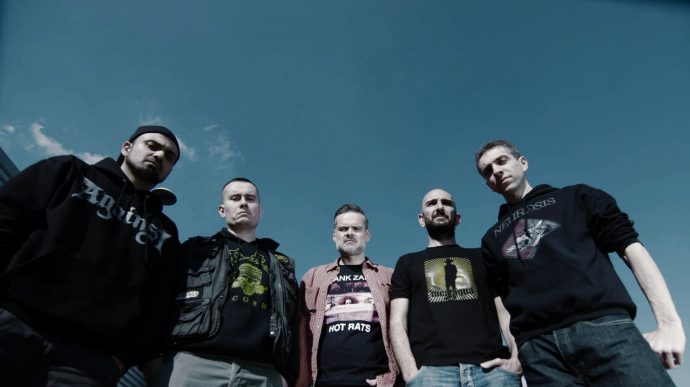 And when asked how things have changed, or stayed the same, for Cripple Bastards, Giulio explained:

“A lot of things. Cripple Bastards is now a five piece band with a completely different approach on songwriting, recording solutions and choosing how to get our music released and spread worldwide – even if we always keep an eye on how it all started and try to play even faster and with a higher dose of rage and violence… all these years in grindcore don’t necessarily mean that we need to move to something softer and in control, but rather that we have gained enough experience and skills to hit even harder. What’s stayed the same is my original idea of how CB has to be: as hateful, negative and fast as possible.”

There has obviously been no loss of passion despite the passage of three decades — witness the fact that Cripple Bastards will be releasing their seventh full-length through Relapse Records later this year. In addition to that, Cripple Bastards is slated to appear at this year’s edition of Maryland Deathfest, as well as at the 2018 edition of Obscene Extreme Festival in the Czech Republic.

And now we move to a glimpse of the savagery that’s barely caged in this box set. The first of the songs we’re streaming is “Grimcorpses” and the second is “L’uomo Dietro al Vetro Opaco” — two recordings separated by 15 years in the band’s career, one of which has never been released before. And we have this introduction to them from Giulio the Bastard:

GRIMCORPSES: “One of the oldest CB songs, written in 1988; as a matter of fact the band that we had before CB was called Grimcorpses. This is the 1993 version taken from one of our first 7″s. It perfectly portrays the sound on those early singles: no bass, abrasive guitar distortion, uncontrolled fast drumming and vocal savagery. All these recordings were made in our practice room with a cheap mixer and few microphones.”

L’UOMO DIETRO AL VETRO OPACO: “This is taken from the demo that we made in 2008 before going to Sweden at Studio Fredman to record our 4th full length Variante alla Morte. This version of the track has never been released before being included in our new The Outside World box set. If the sound on Variante alla Morte was leaning towards a Scandinavian grind/death metal sound due to the production and the downtuned guitar, this “Italian version” shows Cripple Bastards 2.0 with a more hardcore tinged approach, still being ultrafast and rageful.”

And with that, prepare to get blasted.

The Outside World box set is available for order now from F.O.A.D. Records at this location: