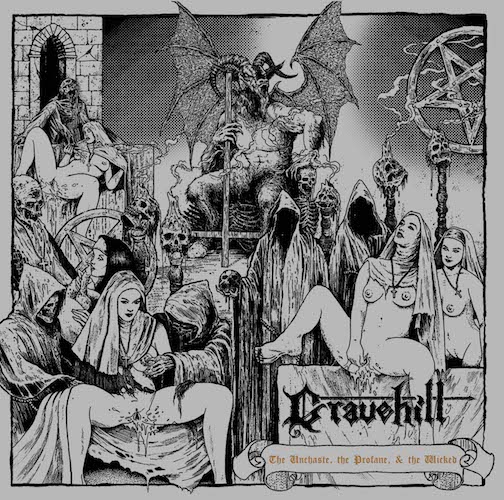 In the summer of last year Dark Descent Records released a sampler of music that consisted of nothing but previously unreleased tracks from forthcoming albums — 11 premieres in one fell swoop. One of those was a song called “The Unchaste” by the veteran Southern California death metal band Gravehill. I was sold immediately, fired up like a Roman candle by that grisly, gruesome, up-tempo dose of barbarity, which included both spectral and face-melting solos and a highly headbangable interlude.

“The Unchaste” is one of 8 tracks on a new Gravehill album, The Unchaste, the Profane, & the Wicked. It’s now set for release by Dark Descent on March 16th. Pre-orders have just gone up today, and to help spread the word, we get to bring you the premiere another track from the album. To go along with “The Unchaste”, today we present “The Profane“. 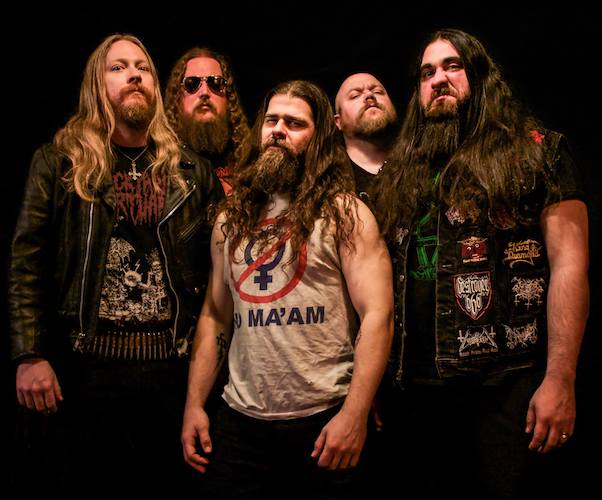 The new record is the band’s first album since 2014’s Death Curse, though they’ve produced some shorter releases in the interim. On this new full-length, the band’s bassist Corpse has taken over the vocals from the departed Abominator, and former Gravehill guitarist Bodybag Bob (ex-Exhumed) has picked up the bass in his place, while Eldehelm has become the lead guitarist. It might seem like a game of musical chairs, but the results of the reconfiguration are tremendous.

“The Profane” packs a mean punch, and it’s also highly addictive (I was about to use an opioid metaphor, but thought better of it). The beefy opening riff alone is pure gold. Together with the neck-snapping drum beat and the pneumatic bass pulse that drive along with it, this is some high-test headbang fuel. And there’s sulfur in the fuel line too, thanks to the sinister tone of the melody and the throat-cutting viciousness of Corpse’s vocals.

If Gravehill had just gone on down the highway to hell with the first two minutes of the track, just locked into that segment for the rest of the song, no one would have been disappointed, but they give us more than that. The music takes a turn into considerably spookier and more ominous territory.

The slower and more horror-stricken mid-section of the song is just as infectious as the opening segment, mind you, and the exotic, spiraling solo that surfaces there is a thing of reptilian brilliance. And when the gears shift again into that big, head-moving opening drive, you get one more solo — one that will scorch your eyebrows.

With just these first two tracks, Gravehill have proven that they’ve got a lock on a primal kind of blasphemous death metal — no gimmicks, no wankery, just a gift for writing songs that make you want to move, get stuck in your head, and might put a chill on the back of your neck, too.

The pre-order link is below. The unchaste, profane, and wicked album art was created by Mark Riddick.

Gravehill will also be participating in the American Armageddon Tour 2018 headlined by the mighty Impiety and also including Divine Eve. You can find the current flyer for the tour below our stream of the new Gravehill song; venues and supports will be announced shortly. 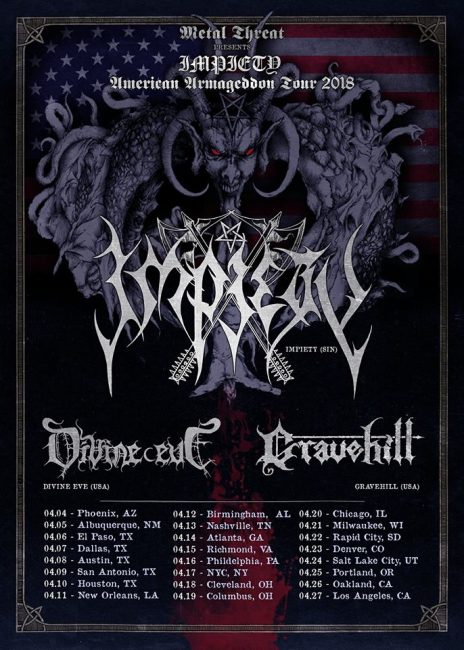 6 Responses to “AN NCS PREMIERE: GRAVEHILL — “THE PROFANE””