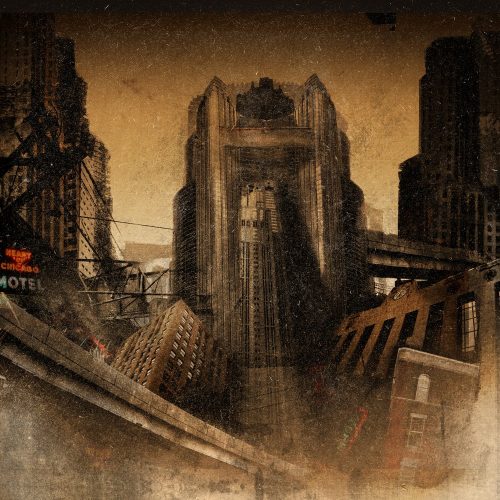 I have no trouble expressing my enthusiasm for individual songs in words that usually spill out in a rush. Reviewing albums, on the other hand, isn’t so easy for me. Reviewing albums like this one by Starkweather and Concealment (set for a March 9 release by Translation Loss and available for purchase here) is an especially difficult challenge.

I’m not a musician, and I’m certainly under no delusions that I’m some kind of music critic. I like to think I have a discerning ear, but about all I know how to do is describe the sensations of what I hear, the way the sounds make me feel, and perhaps provide a bit of guidance to readers. And in the case of this massive, labyrinthine split, that somehow seems grossly inadequate.

The fact that this is a split release poses a further challenge:  I usually refrain from comparing the music of one band to that of another, even as a short-hand reference point. With any split release, however, it’s very tempting to compare and contrast the two sides. After all, they’re being served up in a single package, and sometimes (but not always) the music of the participating bands has a stylistic, conceptual, or aesthetic connection, i.e., they’re intended to function as integral parts of a unified whole, to provide a single experience rather than separate ones. Here, I haven’t resisted the temptation to compare, as you’ll discover at the end of this very long review.

Yeah, yeah, I hear you thinking, Will you just shut up and get on with it? So I shall.

I like this cover art by Alex Eckman-Lawn so much I’m going to use it a couple more times.

Starkweather’s part of this split is a nearly 29-minute saga called “Divide By Zero“. It’s the first release by this Philadelphia band in roughly 7 years, the last one being a split with Overmars.

Parts of the song, including the opening minutes, sound like a field recording of a syncopated pile-driving machine smashing through concrete. While that’s going on in the opening, the guitarist spins out a swirl of freakish, iridescent melody that’s jazz-like in its exuberance and in its improvisational impression. And right there you have two aspects of the song as a whole: It is crushing, and it is destabilizing.

The destabilizing aspects of the music aren’t limited to the weird discordant guitar emissions. The vocals, which often straddle a fracturing line between clean and harsh expressions (but also vault into sky-bound wails a la Robert Plant) are hallucinatory — which is to say they sound drug-induced AND they make you feel under the influence of some psychoactive substance just listening to them. They convey anguish and madness, and later they become monstrous.

The song itself continues to straddle a line, the one between terrifically heavy gigantism with a tangible physical impact and flights of fantasy, or perhaps more accurately, flights of delusion and psychosis. The massive bass tone and clobbering drum rhythms bring the listener collapsing back to earth after the first vocal foray, but then the vocals reappear, ramp up, and sound like they’re about to soar out of the atmosphere, which leads right into an extended guitar solo that’s little short of breathtaking… a technically extravagant, blisteringly fast display of psychedelia that’s making Jimi Hendrix smile somewhere.

And then it’s time to come back to earth again, or more accurately, to be brutally dragged down below the earth’s surface in a descending trough of doom and despair. Everything slows down, becomes ponderous and hopeless, grief-stricken and groaning, and here the vocals turn to growls and shrieks, manifestations of torment and torture.

When the power surge comes again, it’s almost a relief, but it doesn’t last long. The guitarist breaks out an exotic (and narcotic) melody that sways like a cobra and coils like tendrils of smoke from an opium pipe, the vocalist wails like a soulful ghost, the abrasive riffing moves like a serpent. It’s an amazing moment.

And by this point, almost half the song is still left to come.

The war for your sanity continues, the combat between titanic, physically compulsive bass and drum rhythms accompanied by jarring riffs, and unhinged guitar effusions accompanied by equally unhinged vocals that are chameleon-like in their changing formations (I’ve only hinted at their extravagant variety here). The pacing and power-levels ebb and flow; there are more astonishing, channel-shift guitar solos to look forward to; more fluid, gliding melodies; more episodes of intricate, agile interplay between all the performers… and more brutish punishment. To cap off this wild ride, the song reaches an explosive crescendo in the final minutes that left this listener breathless and gaping in wonder.

I didn’t mean to try to map the song as much as I have, but I warned you at the outset that I have a very hard time trying to sum up this mind-bending suite. “Divide By Zero” defies easy description; it defies easy genre labeling; it defies expectations; and it’s worth every minute.

P.S. Division by zero is an operation for which you cannot find an answer, so in mathematics it is disallowed. Or to put it a different way, it yields an answer that cannot be defined under the rules that order the system; no number can capture infinity. Playing by different rules doesn’t help — there is no way to make sense of the operation.

The parallels to human life are there for the taking… and Starkweather has taken them, and given them a powerful expression in these sounds.

“Liminality” is an interesting and provocative name for Concealment’s 21-minute track on this split. According to The Font of All Human Knowledge:

“In anthropology, liminality (from the Latin word līmen, meaning ‘a threshold’) is the quality of ambiguity or disorientation that occurs in the middle stage of rituals, when participants no longer hold their pre-ritual status but have not yet begun the transition to the status they will hold when the ritual is complete. During a ritual’s liminal stage, participants ‘stand at the threshold’ between their previous way of structuring their identity, time, or community, and a new way, which the ritual establishes.

“…More recently, usage of the term has broadened to describe political and cultural change as well as rituals. During liminal periods of all kinds, social hierarchies may be reversed or temporarily dissolved, continuity of tradition may become uncertain, and future outcomes once taken for granted may be thrown into doubt”.

Apart from the provocative name, the track itself also represents an interesting change for this Portuguese band. As in the case of Starkweather’s track, this is their first release in about 7 years (the last one was their 2011 album Phenakism), and it’s orders of magnitude more substantial than the 3-5 minute blasts of bamboozling technical death metal that make up the bulk of the songs in their discography.

But to back-track a bit, “interesting” is really a massive understatement for “Liminality“. It’s a proverbial your-brain-in-a-centrifuge experience — if the centrifuge were affixed to a full-throttle roller-coaster while whipping around. As was true of Starkweather’s “Divide By Zero“, it leaves the listener breathless and gaping in wonder, but it’s a different kind of trip that takes you to that place.

This isn’t the kind of technical death metal that’s currently in vogue, in which bands seem to be competing to see who can go the fastest and generate the most beats and notes per second. To be sure, the music here demands and displays a high level of technical mastery, but not because Concealment are in a drag race with other bands (though make no mistake, they can go plenty fast). On this recording, the technical skill is a necessity because the composition is so remarkably intricate and ever-changing.

All of the performers are top-notch. It wouldn’t be foolish to listen to the song three more times after the first experience, doing nothing each time but focusing on a different aspect of what you’re hearing — from the drums, to the bass, to the guitar. The contributions of each one are distinct in the production, so applying that kind of focus is possible.

Taking it all in as a whole creates the impression of a machine-precise interlocking of wildly gyrating moving parts. Tempos and rhythms change abruptly; sounds seem to scatter, and yet at the same time to be ingeniously connected; there’s no one sequence in which every instrument is locked together, doing the same thing, but there are carefully selected times when they come close… and those tend to resemble the pulverization of a methodical demolition job.

The song’s name is not randomly chosen. The music seems tailored to create mental disorientation, to up-end and cast off what seems steady and predictable, to fracture perceptions of reality — though as the song’s name suggests, it doesn’t replace what has been dissolved. It leaves you addled, wondering what comes next.

The disorienting effect of the music isn’t just the result of its intricacy and unpredictable dynamism. It’s also significantly attributable to the lunacy of the sounds made by the guitarist. The arpeggios are predominantly dissonant and deranged. The music is laced with bleating, blurting, yowling noises and freakish fanfares. The guitar seethes, squeals, shrieks, and skitters in berserker frenzies.

On top of all those disturbances, the vocals amplify the insanity, and give it a vicious edge with ear-scraping tirades — howling and shrieking and emitting gagging regurgitations.

During certain passages in this remarkable trip, things get slow and massively heavy. There are bursts of lead-weighted pounding, with battering drumwork, big, clanging bass notes, and riffs that moan. The music sounds doom-saturated and desolate. Even there, however, madness is mixed with the atmosphere of devastation. The slow repeating riff at the end sends the listener off with an unsettling chill on the skin, and it lingers.

“Liminality” doesn’t seem to be streaming anywhere yet, in whole or in part, though I assume it will be at some point before the release.

These two pieces are quite different from each other in significant ways, but I think they do complement each other. They are both ambitious and experimental in nature — extravagantly so. They’re both technically accomplished. They both prove to be so gripping that it’s not a grim challenge to get through them, despite their considerable length. And in different ways, they are both destabilizing and disorienting, channeling madness through different pathways.

“Divide By Zero” is the heavier and the more psychedelic of the two, and at least for me, the more emotionally involving; “Liminality” is also a mind-bender, but relies more on scrambling the neurons and reconfiguring them than on pulling the listener into a powerful and disturbing hallucination, which is one way of thinking about Starkweather’s track. Together, these two pieces make for a remarkable split, unlike any other we’re likely to hear this year (or in many more years).

2 Responses to “REVIEWED: A SPLIT RELEASE BY STARKWEATHER AND CONCEALMENT”