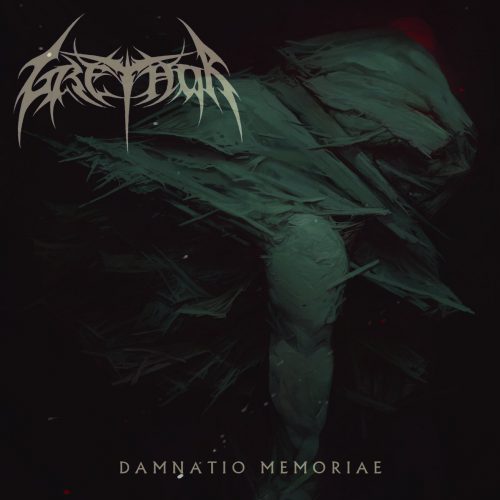 (We present Andy Synn’s review of the new album by Virginia’s Grethor, which is out now via Edgewood Arsenal Records.)

As the old saying goes, “too many cooks spoil the broth”. And the same could be said of influences too.

But while every Tom, Dick, and Harriet out there seems to be dead set on mashing together as many different styles and sub-genres as possible, often in a desperate attempt to maximise their appeal and marketability, there are still some bands – call them purists, call them elitists, call them whatever you will – whose primary goal is not to be all things to all people, but simply to be the best that they can be.

Blackened Death Metal demons Grethor are one such band.

Taking a deceptively simple (but ultimately devastatingly complex) core of meaty, Death Metal riffs and wild, blasting drums, all blackened to a crisp and seasoned to sadistic perfection, and then layering this core with a variety of gruesome embellishments – abrasive dissonance and angular rhythms vying for your attention with some truly macabre melodies and utterly acerbic vocals – the North Virginia quintet have whipped up a sound which, on the surface at least, seems to offer a plethora of familiar flavours designed to tantalise the tastebuds of anyone who enjoys feasting on the dark delights of bands like Morbid Angel, Deathspell Omega, and Gorguts (to name but a few).

Yet by adding a certain something of their own – a certain sense of character, a certain je ne sais quoi – to the mix, this familiar recipe is given brand new life here.

Opener “The Imminent Unknown”, for example is as deliciously doomy and dissonant as it is destructively heavy, while the rampaging gallop of “The God of Eugenics” straddles the divide between Black and Death Metal with all the confidence and of a much older and much more experienced band, whereas the calculated chaos and venomous vitality of “Embracing Oblivion” and the hellishly hooky “Tongue of Argent” find the band skewing more towards the blackened and deathly sides of their nature, respectively, without straying too far from their core sound in the process.

Damnatio Memoriae certainly isn’t perfect of course (what album is?) and its chief sin is primarily one of excess, clocking in at a prodigious fifty-eight minutes in length, meaning that although the album certainly gives you more than enough bang for your buck, its bludgeoning brutality does lose some of its impact over time.

It’s not so much that familiarity breeds contempt… more that, once you’ve been beaten black and blue (and a few other lurid colours) for that amount of time, you inevitably end up becoming a little numb!

Thankfully it seems that the band must have been aware of this potential problem, as they’ve been careful to vary their attack just enough – from the sinister melodic undercurrent of “The Last Manifesto” and the heavy, hypnotic rhythms of “Requiem for a Strawman”, to the unexpectedly proggy grandeur of “Weaponized Madness” – to keep the album from ever becoming stale… even if its almost-unremitting brutality may occasionally leave you a little punch-drunk.

All things considered, by the time the climactic pairing of late-album highlight “From This Rot So Shall We Be Remade” and frenzied closer “Wounds of Ruin” have finished pulverising your eardrums and poisoning your soul, there’s every chance you’ll have a brand new favourite band to tell all your friends about. Which is something you should do immediately after purchasing yourself a copy of Damnatio Memoriae from Grethor’s bandcamp page.