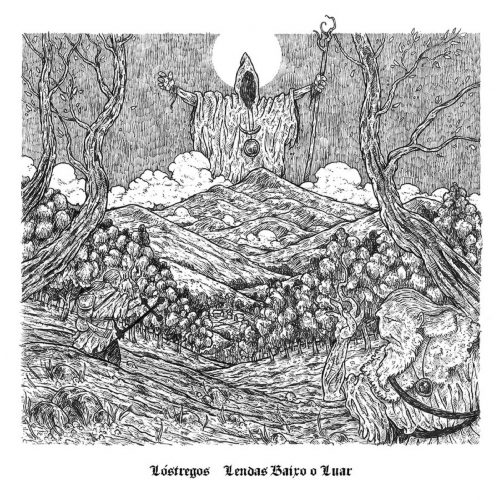 Lendas Baixo O Luar is the debut album of the pagan black metal band Lóstregos from Galicia in the northwest corner of the Iberian peninsula, where the border of Spain meets Portugal. The album was released last November by the Spanish labels Darkwoods and Damnatio ad Bestias, and on tape by Fólkvangr Records (U.S.). It was an album that we somehow overlooked, although it received an extremely positive response from people who were more attentive than we were. And that brings us to today’s video premiere, the subject of which is a track from the Lóstregos album named “Gallaecia“.

One benefit of lyric videos like the one you’re about to see, apart from whatever visual value they might have, is to enable the discovery of music that you might have missed when it was originally released, as this one has done for us. And what a killer discovery this is. 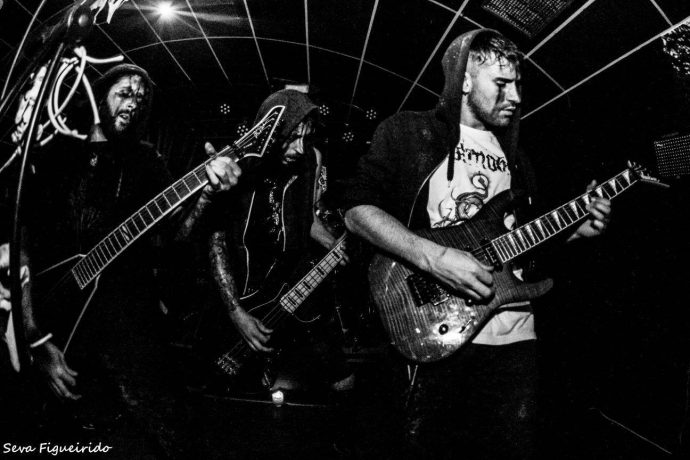 Because the spelling of this song title is similar to, but different from, the Spanish region that Lóstregos call home, I googled it to see what it might mean. I learned this from The Font of All Human Knowledge, which seemed appropriate to share with you as part of the introduction to this video:

The Romans gave the name Gallaecia to the northwest part of the Iberian peninsula after the tribes of the area, the Gallaeci or Gallaecians.

The Gallaic Celts make their entry in written history in the first-century epic Punica of Silius Italicus on the First Punic War:

“Rich Gallaecia sent its youths, wise in the knowledge of divination by the entrails of beasts, by feathers and flames — who, now crying out the barbarian song of their native tongue, now alternately stamping the ground in their rhythmic dances until the ground rang, and accompanying the playing with sonorous caetrae” (a caetra was a small type of shield used in the region).

That excerpt from the Punica seemed fitting because “Gallaecia” is itself a stamping and sonorous song. It whirls and gallops with exuberant energy, pulling together both barbarous black-metal aggression and folk-influenced melodies with an ancient resonance, and it slows to a stamp, the trilling melodic currents turning a darker shade.

But this is an even more multi-faceted song than the preceding paragraph describes. There’s a bridge at around the 3:30 mark that leads into a combination of riffing and rhythm that’s an irresistible heavy metal headbanger, and later the music builds to an explosive crescendo led by a guitar solo that gets the blood rushing. The vocals are also themselves multi-faceted, ranging from familiar throat-cutting black metal snarls to vibrant, burning cries (courtesy of guest vocalist Tharngrist (Marthyrium)) and gang yells.

In short, the song is a complete joy to hear, and it’s capped by the imagery in the video, which gives those of us far away from Galicia a glimpse of its beauty.

Lendas Baixo O Luar is available for purchase from the three labels who participated in its release, via the links below. You’ll find a stream of the whole album after the video.