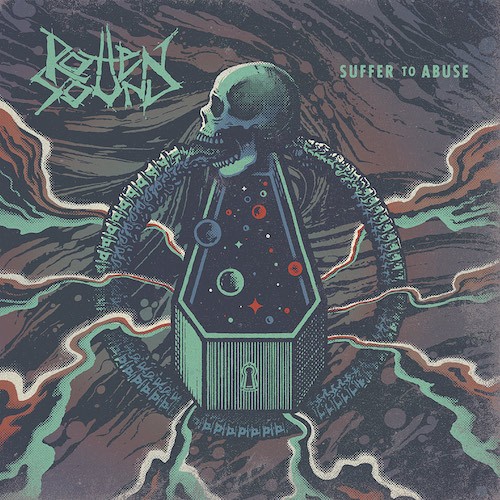 The Finnish grind merchants Rotten Sound, who are favorites around our crumbling domain here at NCS, have a new EP named Suffer to Abuse slated for release by Season of Mist on April 13th in Europe, and on May 18th in North America, because the bastard step-children must apparently wait their turn. Fortunately, we were served at the same time as everyone else with the EP’s first single, “Harvester of Boredom“. 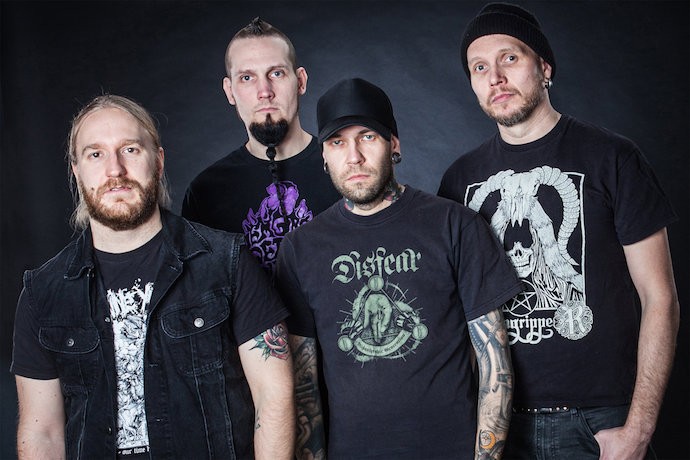 Vocalist Keijo Niinimaa offered these comments about the song:

“Our new track ‘Harvester of Boredom’ is the first song created for this release: Sami’s riffs and the lyrics are about a drug related harvesting in not-so-good conditions. This has nothing to do with Metallica — except for the nodding tribute in the title — just in case someone mistakenly thought that we wanted to comment on their efforts.”

Well, I guess maybe that thought did cross my mind, but the song itself is obviously not some kind of parody. Instead, it’s a mauling barrage of howling, crushing, berserker mayhem. Insane vocals, battering percussion, vicious riffing, powerhouse energy… no one would think of Metallica…. 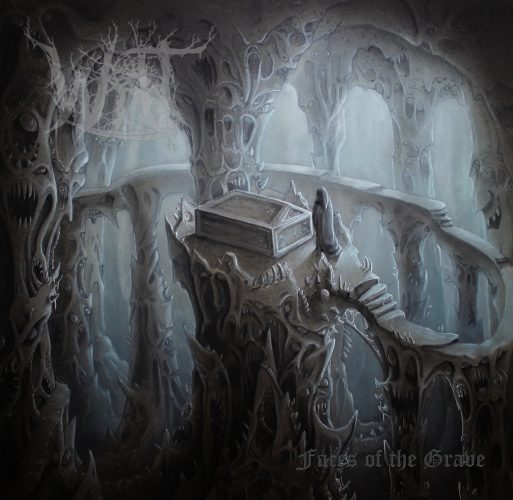 There are three bands named Wilt that I know of. One is an atmospheric black metal band from Winnipeg; one is a death/grind band from Seattle, and then there’s this death metal band from Herford, Germany, whose debut album Faces of the Grave was released on February 16.

I’ve only listened to one track on the album so far — the one that’s set to play first in the Bandcamp stream — but I’ve listened to it at least once a day since the album came out. Surely, at some point I’ll allow myself to move on through the rest of the tracks, and if they’re as good as “The Blades Within“, it’s going to be a stupendous album.

This, by the way, is not wilting music. “Withering” might be a better word. The HM-2 tone of the riffs is massive; the grooves are skull-cracking; the ugly, guttural vocals are staggeringly bestial; and the song in every other way is a monster — ripping and scything at speed, and staggering like a wounded leviathan in its slower movements. And man, it’s addictive as hell — which is why I haven’t made it through the rest of the album yet. 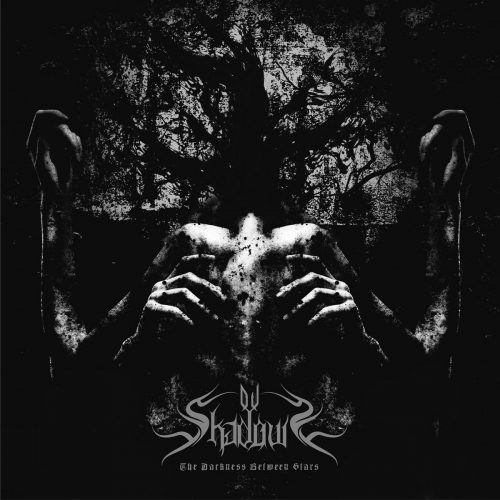 Once again, I owe Rennie at starkweather a high-five for pointing me to this next song, well before I discovered that I had a promo for the album sitting in the infested swamp of our e-mail inbox. The album is The Darkness Between Stars by the Swedish black metal band Ov Shadows, whose four members once made a different kind of black metal under the name Waning. It will be released by Black Market Metal Label on February 23rd.

Having just discovered that I have the album, so far I’ve only heard the publicly released title track. It’s a stunning sonic assault — the rhythm section delivers a high-powered mortar attack while the guitarists spin off streamers of unearthly, mesmerizing melody and the vocalist tears his throat apart in an effusion of blood. The music is enormously heavy, deeply chilling, steeped in gloom, and yet magisterial as well as violent. It scales and soars to epic heights… and when the timpani booms at the end, you can feel it in your bones. 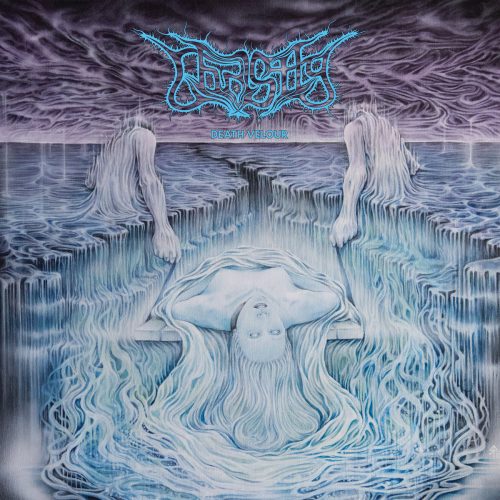 The name of Ghastly’s new second album — Death Velour — made me smile. So did the name of the first advance track, “Blue Velvet“, especially after I heard the song. Other song titles include “Death By Meditation”, “The Magic of Devered Limbs”, and “Violence For the Hell of It”.

I usually don’t quote PR material for the music I choose for these round-ups, but I’ll make an exception here, because there are some nice turns of phrase in this paragraph — and it captures the unusual sensations of the music:

“While there’s no question Ghastly’s Death Velour is a pure Death Metal album, it could hardly be confused with most of the current bands making the rounds. The nightmarish hallucinatory sound Ghastly invokes conjures the horror of rotting in incomprehensible obscurity, passing into oblivion guided by a many-colored specter of strange origin across the styx. An air of psych-induced weirdness and shrieking dread permeates the decomposed palette throughout the album’s cryptic duration.”

There is indeed no way “Blue Velvet” could be confused with most current death metal. It is indeed a strange and hallucinatory creation, a mind-warping escapade whose twists and turns are unpredictable, but alluring. The horror-show vocals, on the other hand, are pure death metal extravagance.

Death Velour will be released by the tasteful 20 Buck Spin on April 20. 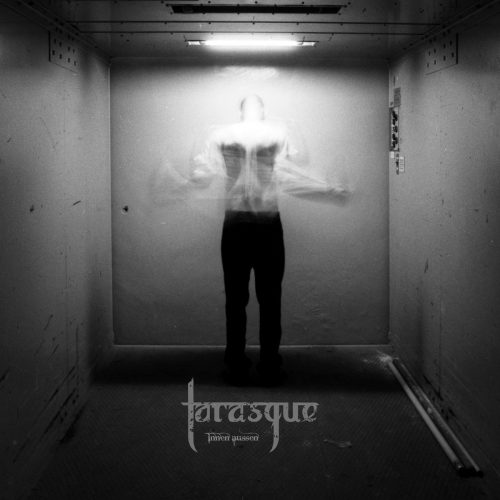 With this next song we now leave the realms of grind, death, and black metal, but not for easy listening, as you’ll soon discover.

The song is “Trümmerfeld“, and it comes from the debut album Innen Aussen by the German band Tarasque, who bring together elements of sludge and post-metal in particularly crushing and explosively intense ways — or at least that’s true (in spades) of this new song.

What a rumbling, rough-housing, skull-pounding juggernaut this is. The grooves are compelling, the morose melodies are intense, and the vocals sound like a mean drunk about to start splitting lips and breaking noses. The band also insert a brooding, bleak interlude, which functions as a prelude to a grand finale composed of grim heaving chords and tumbling drumwork, pulsating bass tones and a soaring, spectral  guitar solo.

Innen Ausen is set for release on Friday the 13th of April. 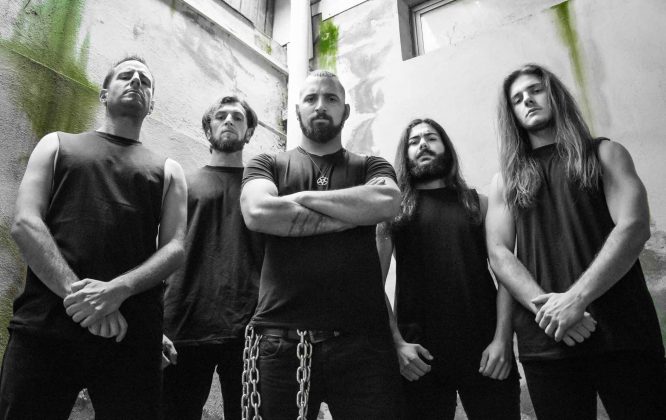 I got hooked on this next song very quickly, thanks to the little rapidly pulsating and swirling lead guitar part that leaps out in the track’s full-throttle opening. It’s amazing how such small little motifs can be such grabbers.

But of course there’s more to like about the song, which is a good blend of darting technicality and punishing brutality, discharged at a fast pace and augmented by livid roars and shrieks. There is a heavy pile-driving breakdown in the song as well, accented by an exotic guitar solo.

The track is “The Call of the Grave” by the Italian death metal band Overactive, and it debuted in the form of a lyric video. It will appear on their forthcoming debut album The Opponent, which was was recorded, mixed, and mastered by the very talented Stefano “Saul” Morabito at Rome’s 16th Cellar Studio (Fleshgod Apocalypse, Hour Of Penance, Decrepit Birth, etc.). It will be released at some undetermined point later this year. The lyric video was produced by Cult Of Parthenope.