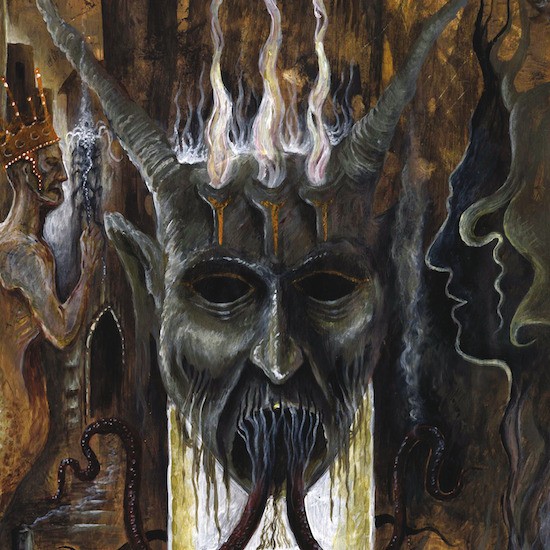 The yearning for death on a mass scale horrifies most people, and these days that yearning is for most people probably associated with the kind of psychosis that leads to the detonation of suicide vests, the use of delivery trucks as guided missiles plowing through packed bodies out for an evening stroll, the massacre of children in their schools with easily bought weapons of war. We can, of course, remember instances of human slaughter on unimaginably larger scales; it’s probably happening again somewhere on earth right now.

But the desire for death made real in instances such as these pales in their scope when compared to the extinction-scale invocations of anti-cosmic extreme metal. Only a tiny sliver of humanity outside such circles would comprehend the attraction of such philosophies. The fraction is probably only slightly larger even within the ranks of metaldom. Yet the concept of vast, terrifying forces entering our dimension from nightmarish shadow realms and consuming all life — and being invited to do so — has animated powerful forms of death and black metal, challenging their creators to attempt to capture such daunting conceptions in sound, with results that have attracted the allegiance of many thousands of listeners.

Even though most people would recoil at the undiluted nihilism that animates such music, there’s no denying the fact that devastation on such an incomprehensible scale pushes artists, in ways like few others, to create music of monstrous power and horrifying impact. The events of Ragnarök and Armageddon have inspired countless metal songs and albums, as have even more occult satanic belief systems, and of course many Lovecraftian tales have played a dominant role as well. However, the solitary individual behind the French band Esoctrilihum has grounded his music in imagined life-ending events of his own conception. 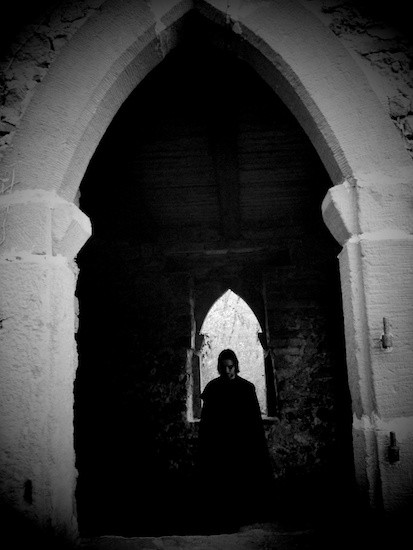 We are told that Asthâghul, who performs all instruments and vocals in the works of Esoctrilihum, has conceived his own frightful pantheon of blind deities of chaos, summoned with reverent pleas into our existence in order to end it. And so now you might begin to understand the lengthy name of Esoctrilihum’s new album: Pandaemorthium (Forbidden Formulas To Awaken The Blind Sovereigns Of Nothingness).

The album is a massive undertaking, roughly 69 minutes of ritual cosmic death worship. One of our favorite labels, I, Voidhanger Records, will release it on February 23rd — tomorrow — and we’ve been chosen as the bearer of the music to your unprepared sensorium through the first public streaming of the album at the end of this post.

How has Esoctrilihum responded to the challenge of capturing horror on an immeasurable scale, the challenge of summoning the sensations of blind forces from the void crossing through a portal to render our own reality into a void?

The music is not merely apocalyptic and violent in its sound — though it is that. One must remember that this is a devastation to be hoped for, as well as feared. And so choral voices are lifted up at the outset, in the midst of sweeping musical panoramas and ritual drum rhythms, capturing a kind of solemn reverence for a looming majesty.

Those feelings of intense foreboding, solemn reverence, and terrible unknowable majesty are invoked again in different ways as the album proceeds. And chaos is invoked as well, through the pulse-pounding battery of surging drums and jolting, head-moving riffs, through the caustic, murderous snarls, the wild shrieks, and the gargantuan growls of the vocals, through the feverish, twisted emanations of the lead guitar.

The utter alien-ness of the actors called forth in this horrific drama becomes manifest in the serpentine tendrils of eerie melody that shimmer and slither through the pandemoniums of primally attractive sound that Asthâghul has conjured. And make no mistake, the music is powerful on a primal level, which is to say that its potent rhythmic drives make you want to get on your feet and move, to lose yourself in the kind of headbanging that involves your whole body, even as it mounts to frenzied, blast-furnace crescendos of terror and chaos that might make you want to stop moving and cower in the corner.

It’s a nightmarish experience, too, which is also a primal experience. There’s a dreamlike, quasi-psychedelic quality in some of the passages on the album, the kind of dreams that make you wake up in a cold sweat. And further, Asthâghul laces the songs with exotic and mystical melodies that prove to be quite alluring, and fluid streams of melancholia that bring feelings of grief to this apocalyptic pageant (as if there might be some grain of worth in humanity, some tiny aspect worth saving… but that ultimately can’t be saved).

I don’t use the word “pageant” in an off-hand way. The album has a theatrical quality, not merely dramatic but unfolding like a play, like a narrative that moves from event to event, with highs and lows that come and go, and portrayals of dreams and devastation, madness and majesty, all wrapped together before the final fall of the curtain. Perhaps surprisingly, for an album with the conception of this one, even beauty is to be found here, along with all the world-ending barbarism.

The performance is one you can easily lose yourself in, carried away by the power and the fantasies, rooted in place by the changes of scene, transported by macabre visions and whirled away by stomping dances and cyclones of fury. It’s an ambitious production, no doubt, and one that succeeds impressively in the execution.

As noted, Pandaemorthium… will be released by I, Voidhanger on February 23rd. The striking cover art and paintings for the 12-page booklet accompanying the CD edition of the album were created by Alex Shadrin (Nether Temple Designs), with art direction and layout by Francesco Gemelli. The music is recommended for fans of Leviathan, Inquisition, Portal, and Mare Cognitum.

4 Responses to “AN NCS ALBUM PREMIERE (AND A REVIEW): ESOCTRILIHUM — “PANDAEMORTHIUM (FORBIDDEN FORMULAS TO AWAKEN THE BLIND SOVEREIGN OF NOTHINGNESS)””