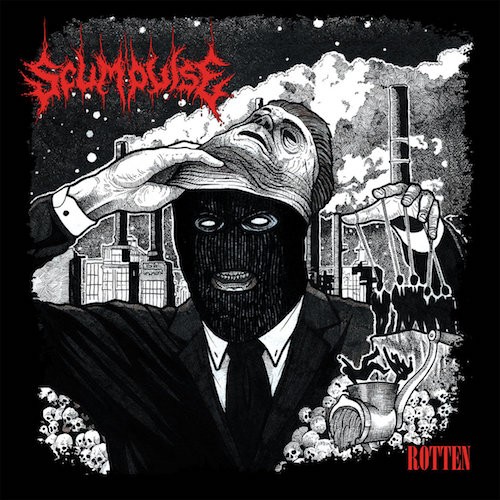 When you listen to the new Scumpulse album — and you damned well should — you won’t have time for any deep breaths. But the music is such a high-powered, adrenaline-triggering rush that you won’t miss the oxygen. Hyperventilation will take care of that for you. You can rest later.

The name of the album is Rotten, and it will be released by Gore House Productions in just two days, but you can listen to it today. You will find this Scottish band’s attack to be relentlessly pulse-pounding, but although its feral ferocity is indeed capable of taking a listener’s breath away, the band have packed the music with turn-on-a-dime changes, creating a genre-hybrid that’s a serious eye-opener. 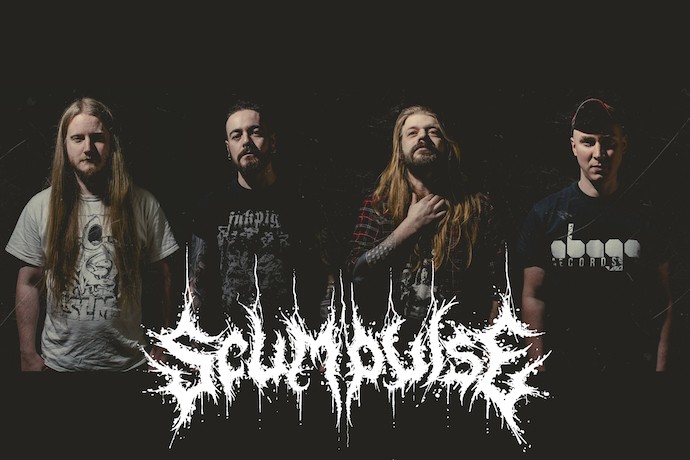 The splicing of crust-punk and black metal seems to be in vogue these days, and Scumpulse have got that in their twisted DNA, but they don’t stop there. You can also pick out elements of death metal (both the murderous and the melodic kind), and the music is often discharged with the break-neck pacing and violent fury of grindcore. The vocals are equally multi-faceted, though uniformly enraged — a fusillade of rapid-fire barks and shrieks, raw carnivorous howls, bestial roars, and even a smattering of gang shouts.

The album starts in the red zone with the opener “Alba Gu Bràth”, a full-force torrent of boiling riffs, flickering leads, deep, rapidly thrumming bass, and clattering, hammering drumwork. It seems like the un-caging of a red-eyed, teeth-gnashing animal, with a furious energy that’s as communicable as a flesh-eating virus. And on top of that, the band deliver knee-capping rhythmic power and the first of the many scintillating solos that take each track on the album and send them into the stratosphere. (The guitar solos really are very, very good… and you get one in the second half of every track, though they’re not clones of each other by any means.)

Surprisingly, given the onrushing power of the opener, the band reach an even more incinerating flashpoint with the title track, which comes next. It comes at you in an even higher gear, with flashing fretwork and drum blasting that’s a reasonable facsimile of automatic weapons fire. The feverish lead guitar machinations seem unhinged, but the bursts of nail-gunning rhythm in the track will get your head going too.

Even in these two opening tracks you’ll get a feel for the band’s propensity to switch things up, and to make the changes just as fast as the overarching speed of the music. “Broken Reflection” combines soaring melody, jagged speed-demon riffing, and jolting percussive power, while “Gnawed By Pigs” comes across as a grim, fearsome race, like a starving wolfpack on the hunt; the melody seems despairing as well as frantic.

“King of Dogshit” moves from a blazing gallop and dire, boiling guitar work, to a bracing warlike charge reminiscent of fast-paced Scandinavian melodic death metal. D-beat rhythms are a constant companion through the album, and “Pure Jakebawlocaust” combines punk-like scampering with jaw-breaking jabs and dancing leads. More pulse-pounding punk chords are on display in “Wage Decay” — along with stinging, hornet-swarm riffing, flurries of ringing dissonance, and something like a despairing funeral dirge to break up the romp.

And yes, there are a few brief moments when Scumpulse ease back on the throttle, usually as a bridge to something new, although the closing track “Sand and Dust” begins that way. The distorted, moaning and wailing guitar intro is slow and despondent, and the song includes an intense, bereaved lead, but the mix of d-beats and blast-beats, along with blasts of riffing frenzy, will put the spurs to you one last time.

And then you can catch your breath.

Unless of course you’d like to stay lathered up and let Rotten run through your addled head one more time. 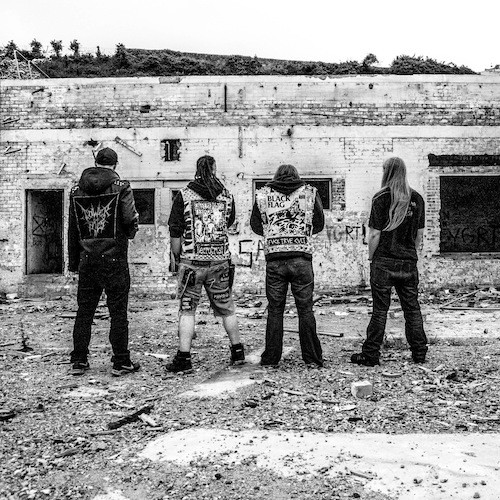 Look for Rotten via Gore House on February 23rd. Scumpulse would welcome your interest. As they’ve told us: “We are proud to be finally unleashing this Rotten slab of blackened crust to the world. Enjoy it with a fine glue.” You can pre-order it via the link below. And you can catch the band on tour this month and next, per this schedule:

4 Responses to “AN NCS ALBUM PREMIERE (AND A REVIEW): SCUMPULSE — “ROTTEN””