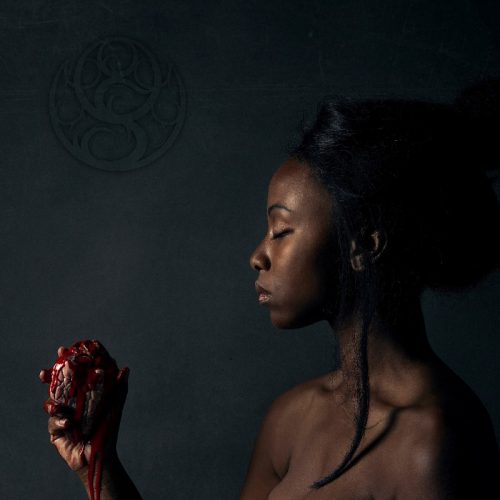 (Here’s Andy Synn’s review of the new album by Houston-based Oceans of Slumber, which has just been released by Century Media Records.)

If there’s one thing that’s immediately obvious about Oceans of Slumber, it’s that they’re an easy band to love.

The band’s intricate but engrossing song-writing style, topped off with the truly awe-inspiring vocals of Cammie Gilbert, and fuelled by the prodigious drumming talents of Dobber Beverley, makes for a formidable formula for success, and the general response to both their previous album, Winter, and their newest release, has been one of almost unmitigated praise.

But while the band’s potent blend of ability, ambition, and peerless passion, certainly makes it difficult to criticise them… it doesn’t make it impossible.

Because, as great as it is, The Banished Heart isn’t flawless.

Now, before you fly off the handle, let me reiterate — The Banished Heart is, despite these flaws, a great album, one which sees the band making some major improvements to their core sound, while also addressing several of the more glaring defects which afflicted its predecessor – particularly with regards to cutting down on the unnecessary/underdeveloped interlude tracks, maintaining a much more consistent mood, and saving the cover track (“Wayfaring Stranger”) until last.

As a result the music this time around has a much more coherent sense of identity, with the songs all rooted in the same doomy foundations, but still able to blossom and grow in different directions as they develop.

It’s a small change really, but an important one all the same, as it means that while tracks like slow-burning opener “The Decay of Disregard” (which really could afford to lose about a minute of intro, and be no worse for it) and its more aggressive follow-up “Fleeting Vigilance” may ultimately portray slightly different aspects of the band’s sound, they still share the same roots, the same bones, the same source, when all is said and done.

This early run of stellar quality continues apace with the strikingly versatile “At Dawn”, which sees clean and harsh vocals, slow, doom-laden riffs and furiously technical fretworks, haunting atmosphere and blastbeat-driven intensity, playing off one another in a stunningly dynamic display of scintillating emotion and song-writing skill, after which the sublime title-track provides a simpler, yet no less stunning, window into the band’s wounded heart.

As good as this album is, however, one nagging issue remains – it’s just that little bit too long for its own good.

Now I have nothing against long albums per se (I try to take each one on its own terms, as every album has a different “optimal” length, in my opinion), but the music on The Banished Heart definitely seems to reach its true crescendo with the soaring finale to “A Path to Broken Stars” (which, along with the surprisingly brutal “Etiolation”, makes for yet another phenomenal pairing), to the extent that the material which follows tends to feel a little anticlimactic as a result.

And while both the slightly Devin Townsend-ish “Howl of the Rougarou” and the generally superfluous “Her In The Distance” were always going to suffer in comparison, making up as they do the album’s lowest ebb, the utterly heart-wrenching “No Color, No Light” certainly deserves more.

A better overall move would perhaps have been to switch out the redundant ambience of “The Watcher” for the more immersive, more emotive, strains of “No Color…”, and to allow the album to end with the more obvious climax offered by “A Path to Broken Stars”, which would – even with only seven songs – still have provided over fifty minutes of the band’s signature melodic melancholy to lose yourself in.

Still, I’m not going to fall into the trap of reviewing what could have been, and instead would like to re-state that, all (hopefully constructive) criticism aside, for the most part The Banished Heart is a truly spellbinding experience which, if anything, is held back only by its own unrestrained ambition.

So perhaps the main thing to take away from this review (apart from the fact that Cammie Gilbert is still possessed of one of the most divinely gorgeous and heartbreaking voices I’ve ever heard) is that, in my opinion at least, as good as this album is (and it really is) Oceans of Slumber still haven’t fully realised their true potential yet.

And that, quite frankly, is an astonishing thing to contemplate when you really think about it.

4 Responses to “OCEANS OF SLUMBER: “THE BANISHED HEART””