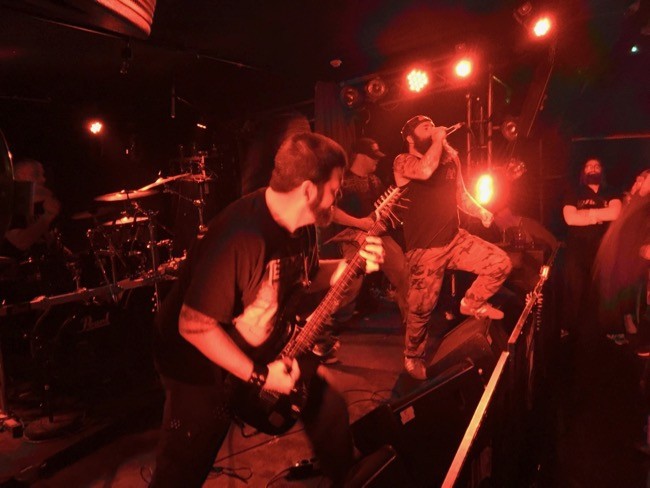 As I mentioned in yesterday’s post, I’m in Reykjavik, Iceland. I say that not to rub your nose in a fact
that seems to have provoked jealousy in a few friends, but only because it’s obvious from what you’re about to read. Of course, it would be understandable if you were jealous, because it is pretty fucking wonderful to be here.

The primary purpose for the trip was to attend the last edition of Oration Fest later this week, but I had an unexpectedly outstanding way to spend our first night in the country, because it turned out that last night was the date scheduled for the Reykjavik Deathfest Warmup show, featuring performances by Skinless, Munnriður, and Severed. (The third edition of Reykjavik Deathfest will take place in May — and Skinless and Severed will be playing again then — and you can details about that here.)

I wasn’t aware of this until a couple of Icelandic Facebook friends told me yesterday afternoon, and one of them took the added step of putting me on the guest list, which removed all doubt about whether to surrender to jet lag or venture forth for a night of headbanging. 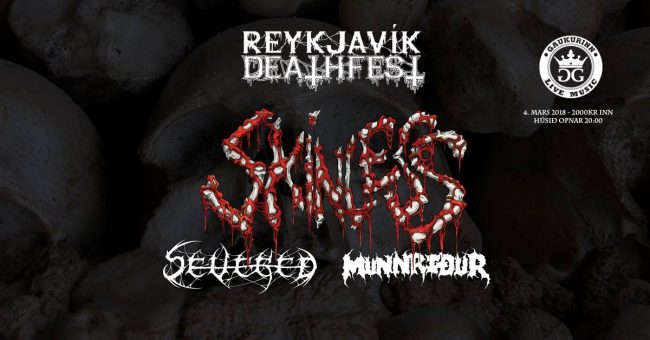 Jet lag was in fact an issue. We flew overnight from Seattle, leaving Saturday afternoon but arriving at 6:30 a.m. on Sunday morning due to an 8-hour time-zone difference (the flight itself lasted only about 7 hours). None of us in our traveling party slept during the flight, and then didn’t have a chance to crash until early afternoon on Sunday because our hotel rooms understandably weren’t ready at the crack of dawn when we arrived.

With a nap and an outstanding dinner at Sæta Svínið Gastropub (accompanied by a couple shots of Black Death Brennivín and Viking Red IPA) behind me, I was ready for the short walk from our hotel at the old Reykjavik harbor to the Gaukurinn bar where the show was held. (And thank dog it was a short walk, because holy hell, the gale-force wind coupled with the frigid temperature made each step a brutal experience). My two traveling companions decided to forego a late night, but I forged on, and am really glad I did.

I took an immediate liking to Gaukurinn. Not a terribly large place, but it still had a spacious feel — “intimate” without being claustrophobic. Even with a couple hundred folks in the audience (my best guess), it was easy to get close to the stage without having to be an asshole about it. And get close to the stage, I did. 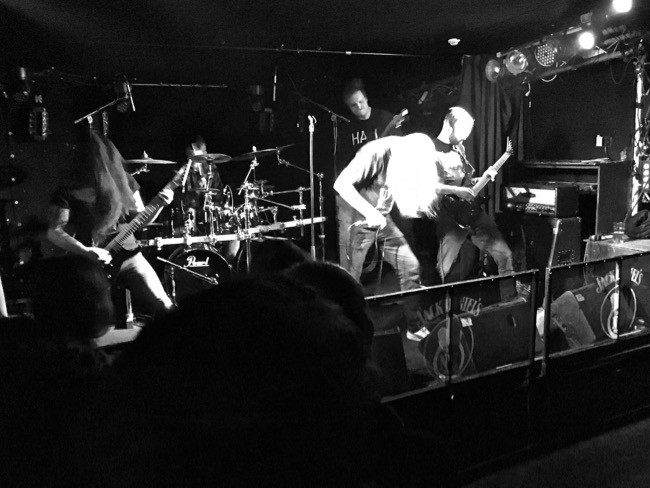 It dawned on me within minutes of Severed taking the stage that this was the first time I had been to a metal show outside of the U.S. and western Canada: These people weren’t speaking English! I don’t know why I was surprised; it just shows how parochial I am. (And by the way, there’s something about the sound of Icelandic to my foreign ears that’s delightful (one of my traveling companions says it makes her imagine that she’s been transported into the world of Tolkein)).

The first Icelandic words I heard from the stage came from the delightfully boisterous front-man of Severed, Ingólfur Ólafsson, whose extravagant mane of blonde hair and equally extravagant blonde beard made me think of a jovial Viking… but once the band launched into their set, the barbarous side of that image also leaped to mind. 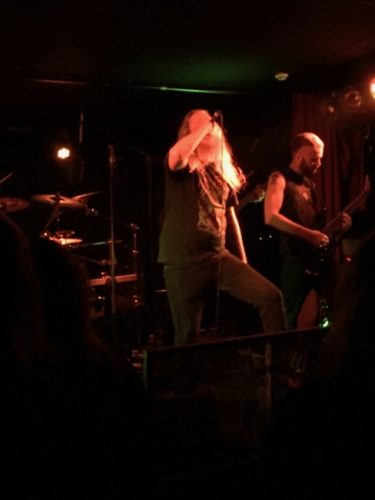 Severed put on a ferocious but mind-bending set, combining elements of brutal death metal and technical death metal, laced with lots of dissonant melody and pivoting rapidly among different tempos and moods with razor-sharp precision. In listening to the labyrinthine movements of Severed, the band whose music came to mind most strongly was Gorguts, which is intended as a high compliment.

I hope Severed are planning a new release soon. I feel very fortunate to have had the chance to witness them performing live, and only regret that I wasn’t in quite a good enough position to make a video without annoying people behind me. I got in a better position for the next two bands. 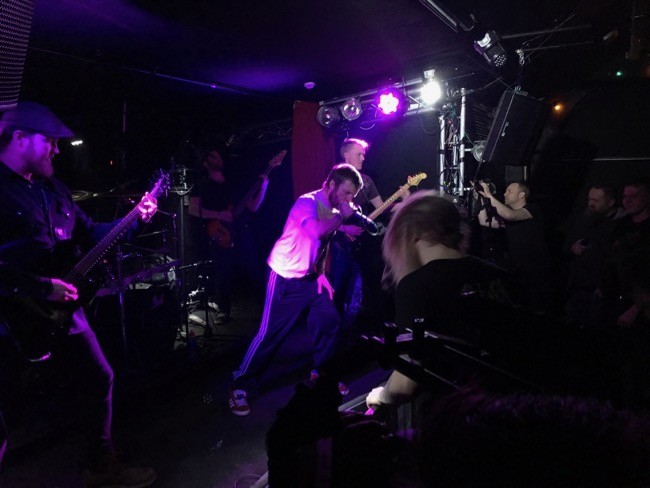 Unlike Severed (and Skinless), Munnriður was a new name to me. Although I didn’t know it at the time, this was a very special performance. What I now know is that Munnriður originally formed in early 2003 under the name ROT. They disbanded in 2005 after releasing one demo, and then re-formed and disbanded again after releasing an EP. And then in the summer of 2009 they went on hiatus again, but reunited for the show I attended last night.

I was able to find a perch on an elevated level to the side of the stage for Munnriður’s set and made one video from there, which you’ll find below. A professional-looking videographer was just in from of me at floor level, so I assume there will be even better videos of the entire set which will emerge at some point. 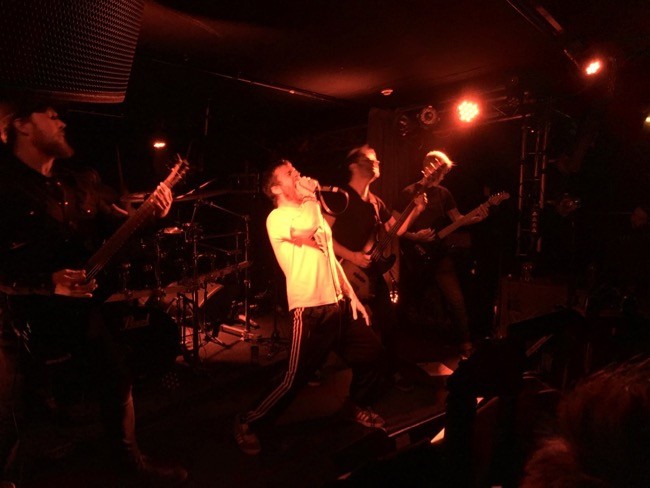 Munnriður’s music struck me as a kind of heavy-grooved amalgam of metalcore, nu-metal, and death metal. At times I thought of Static-X, circa Wisconsin Death Trip (a favorite of mine to this day). At others times, things got rapaciously brutal. Throughout, the band seemed to be having a hell of a good time, and the audience was obviously responding in the same way. I had a fine, neck-wrecking good time myself.

Speaking as the selfish bastard that I am, I hope Munnriður’s break from their hiatus will last longer than this one performance — long enough to record and release some new music. 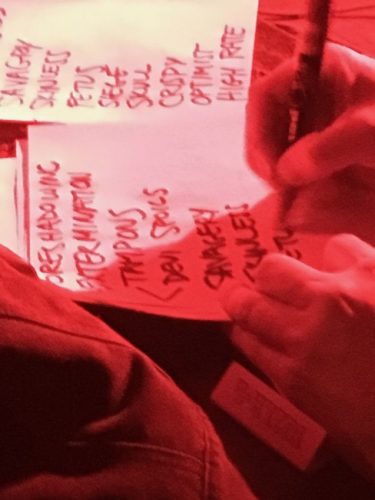 I’m not a died-in-the-wool, fanatically devoted fan of brutal death metal. I tend to get bored with a lot of music parading under that genre title, perhaps because a lot of BDM bands aren’t bringing a whole lot of song-writing or performance skills to the table. New York’s Skinless, on the other hand, have been a personal favorite for a lot of years. And so it was yet another huge surprise last night to get to see them live… in Iceland, of all places.

You might wonder, what were Skinless doing in Iceland? Well, on Saturday night (the night before this show) they performed at Netherlands Deathfest, and I assume they chose to squeeze in this show at a stopover on the way home. I’m very glad they did. 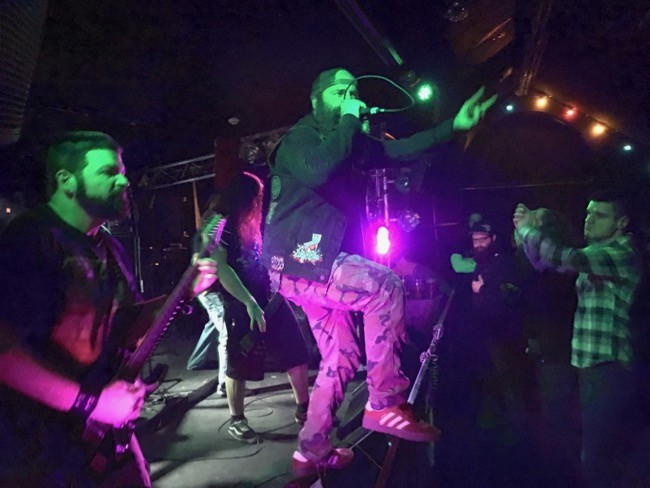 After the first handful of songs in their set, I posted this comment on Facebook along with the video you’re about to see: “With the thermonuclear beatdown Skinless are inflicting, there’s a high risk of vulcanism in downtown Reykjavik”. And that’s what their music felt like — a full-bore eruption of bone-rattling, spine-shaking, brain-electrifying nuclear vandalism, packed with vicious (but catchy) riffing, brutally powerful rhythms, and cannibalistic vocal ferocity. 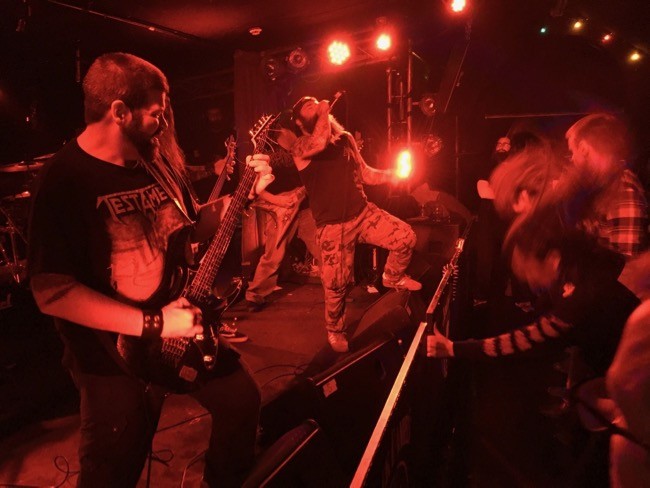 Perhaps needless to say, I left Gaukurinn with a big smile on my face, and a few loose teeth from the combined punch of these three bands. Huge thanks to Eyvindur and Gerður for telling me about the show, and to Eyvindur for getting me on the guest list at the last minute.