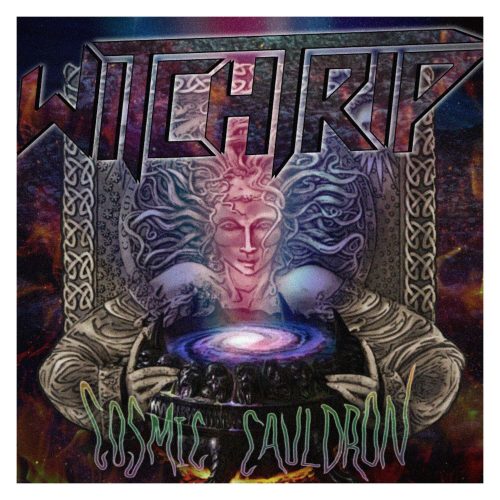 We were told that the Canadian band Witchtrip includes all the members of Winnipeg’s Occvlt Hand other than the vocalist — so, basically the same band with a different singer. That was reason enough to check out the two tracks on Witchtrip’s debut EP, Cosmic Cauldron, because we were big fans of Occvlt Hand’s 2017 album, Not Everyone Deserves A Happy Ending. We gleefully premiered a track from that album, and put that same track on our list of 2017’s Most Infectious Extreme Metal Songs.

Now, one would expect that Witchtrip’s music would be different from Occvlt Hand’s, despite the significant overlap in members. Otherwise, why choose a different name? And in fact, the music is quite different. And perhaps it should also come as no surprise that the music is nevertheless really, really good — as you’re about to discover for yourselves through our premiere of Cosmic Cauldron in advance of its release on March 16th by Possessed Records. 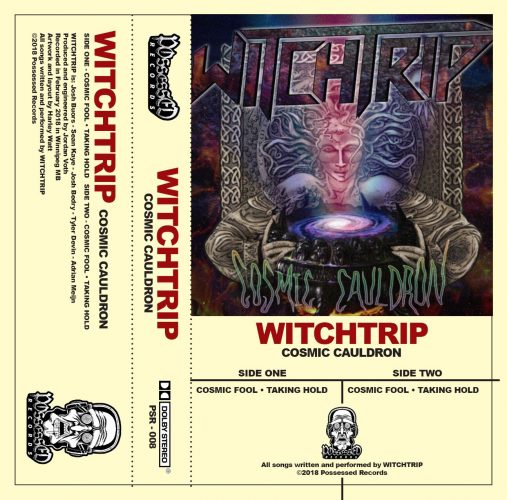 The two mid-paced tracks on the EP — “Cosmic Fool” and “Taking Hold” — are massive, lumbering monsters, deploying the kind of rumbling, chugging riffs and skull-cracking drum rhythms that produce reflexive head movement. The guitar leads in “Cosmic Fool” are a mix of slow pulsation and python-thick slithering, while the lead in “Taking Hold” produces a rising, tension-ratcheting sensation. Both songs also feature boiling, psychedelic solos, and lyrics that you might want to yell along to.

If you’re looking for a genre label, I suppose you could call this a variant of stoner doom, but that’s certainly not an exact fit — and the vocals certainly aren’t standard for that sub-genre. The lead vocals are the kind of vicious, acid-bathed shrieks that wouldn’t be out of place in a black metal band, although morose clean vocals join with those caustic furies in occasional duets.

Both tracks are heavy, dark, and powerfully addictive, and it should come as no surprise that both are now on my list of candidates for the 2018 edition of that Most Infectious Song list.

If you like what you hear, then mark your calendar to visit Possessed Records’ Bandcamp page on March 16th to grab a download. A limited cassette-tape edition will be released by Possessed later this year. Follow Witchtrip and Possessed on Facebook for further details.