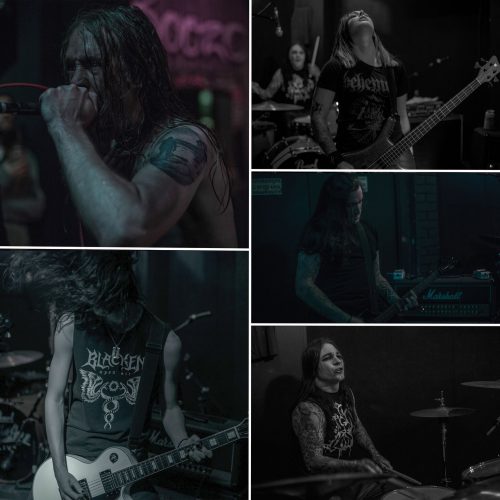 For want of a better term, some of us refer to certain kinds of songs as a “journey”, because the music changes as it proceeds. Abrupt and unconnected changes wouldn’t normally bring that term to mind. There must instead be some sense of purposeful movement from a starting place to another, different place — a feeling of evolution and progression, even if the movement might ultimately become a circle that ends where it begins.

That notion of a musical journey comes to mind in listening to the new song by the Australian band Cancer that we’re bringing you today through the medium of a music video. The song, “Modus Operandi“, is the first single from the band’s forthcoming debut album, Into the Heartless Silence, which is expected for release in June via Throats Productions. The album builds upon the musical explorations revealed through the band’s 2016 debut EP, Terminal.

The emotionally imvolving journey made manifest in “Modus Operandi” is charted through a landscape of depressive black metal, but different musical vistas also reveal themselves as the movement unfolds. The progression begins with a raw sensation of tension and foreboding created with distorted, discordant chords and notes, and then the sound explodes in violence and pain — a torrent of hammering drums, raking and boiling riffs, and a mix of incinerating shrieks, horrid roars, and wretched cries.

But in the midst of this eruption, there are hints of gleaming melody, which unfold in full as the percussive propulsion diminishes and a swirling, ethereal guitar rhapsody emerges over a pulsing bass line and a head-nodding drum cadence. The caustic pain of the shrieked vocals persists, but joined by the somber, melancholy tones of singing, which add to the music’s changing dimensions. And at the end, when the percussion becomes silent, a quiet mood of wistfulness and loss survives.

The video, made by DarKSpiritPhotography, is a journey itself, a representation of torture and agony, but one that by the end seems to be revealed as a metaphor.

For further information about the release of Into the Heartless Silence, watch the spaces below. And for those new to Cancer, we’ve also included a previously released video for the opening song off the Terminal EP called “Distant Dreams“.