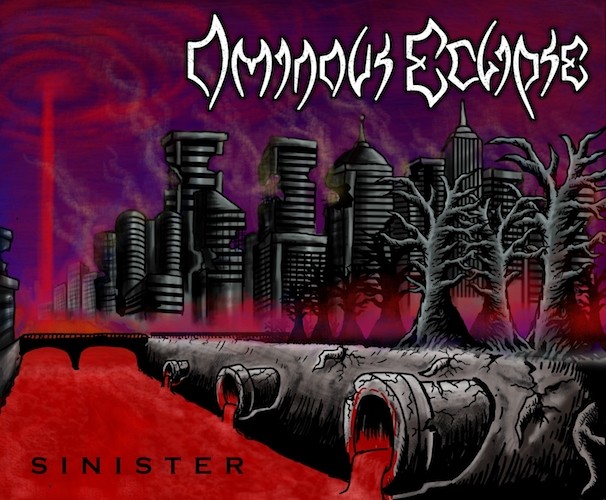 Fourteen months ago we premiered a barbaric battle song named “The Horde” by the extreme metal band Ominous Eclipse from Ottawa, Ontario. Since then another single from their forthcoming album Sinister has surfaced, one that spiraled into insanity last fall at DECIBEL’s site. And today we bring you one more, and it’s the title track from Sinister, accompanied by a video of the band’s performance.

In that previous premiere we observed that as the evolution of Ominous Eclipse has progressed, the band have hybridized a seething core of death metal sound with elements of thrash, black metal, and melodic death metal, and with “The Horde” they reached for new levels of monstrous and electrifying destructiveness. Electrification, destructiveness, and rage are also on display in “Sinister” (the song), along with a heavy dose of body-moving grooves and scintillating guitar lunacy. 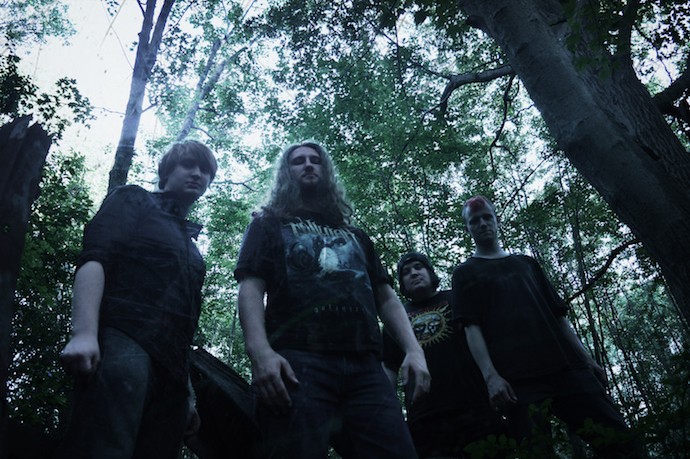 “Sinister” is a high-energy track launched by heartless riff jabs, ear-scouring string squeals, and neck-snapping drumwork. The vocals come for your throat, too, in an effusion of heartless roars and face-scraping shrieks, and the song is accented by flurries of spidery, darting fretwork and by a pair of flashy, fluid, but demented solos. It becomes a thrashing gallop, but without becoming any less venomous in its delivery.

The band explain that “‘Sinister’ is a grim, bleak tale of the fate of our world constructed with a vast variety of metal sub genres and influences”, and the lyrics do indeed tell a bleak tale about a “new era of war” on earth, one in which brutal conflicts have sent desperate innocents fleeing from their homes, helplessly pleading for protection but being ignored as a result of “first world greed”. Selfishly, the lyrics exclaim, we turn a blind eye on the true darkness around us, and belittle the true horror of this victimization.

Sinister’s complete track list is below. A precise release date hasn’t been identified, but it will be sometime later this year. For further info about the release, follow Ominous Eclipse on Facebook.

TRACK LIST:
1. Death By Dissection
2. Sinister
3. Spiral Into Insanity
4. Lost At Sea
5. No Redemption For The Damned
6. Breaking The Chains
7. The Horde
8. Eye Of The Raven

One Response to “AN NCS VIDEO PREMIERE: OMINOUS ECLIPSE — “SINISTER””