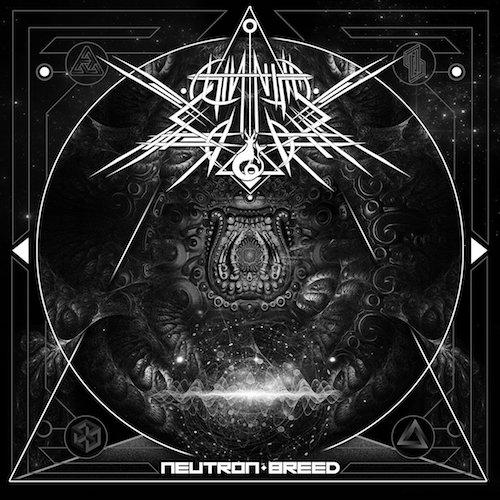 Neutron Breed is so blindingly explosive, so uncaged in its dedication to sonic violence, and so eye-popping in the speed and technical precision of its execution that it has the capacity to suck the air from your lungs while it turbocharges your own pulse rate. Worry about breathing later… prepare now to give yourself over to a maniacally vicious death metal rocket ride.

Neutron Breed is the new EP by the Italian band Quantum Hierarchy, which is being released today by Everlasting Spew Records, and it’s our privilege to help spread the word through the premiere of a full music stream.

It doesn’t take long to figure out that there’s some top-shelf talent behind this project. It initially took shape in 2014 through the union of vocalist/guitarist S.M. (already a member of Hellish God and formerly of Imposer and Voids of Vomit) and drummer M.B. (also in Voids of Vomit). They were later joined by bassist M.C. (ex-Agony Face), and Neutron Breed was eventually recorded last year with session drummer Riccardo Fanara and backing vocalist Mattia De Fazio (Hellish God, Mindful of Prypiat, ex-Antropofagus). Quantum Hierarchy cite as their main influences such bands as Morbid Angel, Incantation, Arkhon Infaustus, early Nile, and Hate Eternal.

Thoughts of neutron stars may be prompted by the name of this demo, but the music itself replaces such thoughts with images of supernovas.

A wall of pestilential, abrasive sound and horrifying roars introduces the EP, but with a terrifying shriek you’re launched into the three complete songs that make up the body of this obliterating release. And what those songs deliver is a stunning rush of high-speed drum battering, boiling bass notes, and chaotic, swarming tremolo riffs that convey sensations of inhuman malevolence, completed by deep, gravel-throated roars and rancid, bile-spewing shrieks. Interspersed within this overpowering torrent of fury are dissonant chords, smashing grooves, and soloing that ranges from deranged to morbidly dismal.

The drumming is not merely fast, it turns on a dime with electrifying precision. Speed is a hallmark of the fretwork, too, but it also changes course in the blink of an eye, racing in a vicious cyclonic blizzard of sound one moment, and slugging the listener in the neck the next. And so although the music here is frighteningly violent and murderously uncaged at all times, it’s also the sound of a well-oiled demolition machine driving on all cylinders, all the component parts interlocking with finely honed precision.

This really is an explosive debut, a really riveting listen as it now stands and also reason to get excited about what Quantum Hierarchy might do next. (We’re told that the band is now being carried forward by S.M. alone, joined by other talented musicians whose names have not yet been revealed.)

Everlasting Spew isn’t selling the demo physically, but is adding it as an extra bonus for any other order on their web shop above €15. Check the links below for further details on how to get it, and follow Quantum Hierarchy on Facebook to stay abreast of future developments.

5 Responses to “AN NCS EP PREMIERE (AND A REVIEW): QUANTUM HIERARCHY — “NEUTRON BREED””