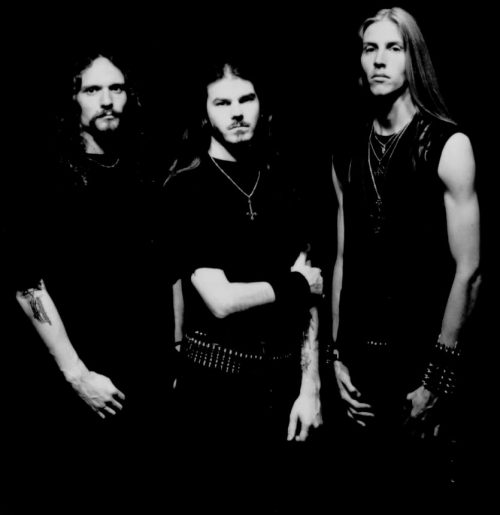 (In this month’s edition of THE SYNN REPORT, Andy reviews the three albums recorded by the Swedish band Sacramentum before their demise.)

Up until a few days ago I actually had a very different band lined up for this edition of The Synn Report but, upon remembering that I was going to be spending this weekend in Oslo enjoying the musical delights of Inferno Festival, I decided to switch things up and dig into the archives a little bit to talk about a band much more suited to my current circumstances, a band who – while perhaps not as famous (or infamous) as some of their more celebrated peers – are still something of a seminal act in the annals of Black/Death Metal.

Operating as a three-piece for the majority of their career, Swedish riffmeisters Sacramentum were contemporaries of (and some might even say friendly rivals with) both Dissection and Necrophobic, and helped form one of the primary pillars of the Swedish Black Metal scene during its early development. And while their fame may have been somewhat overshadowed over the years, in the right circles the band are held up as just as important, just as influential, and just as impressive as any of their peers… and rightfully so. 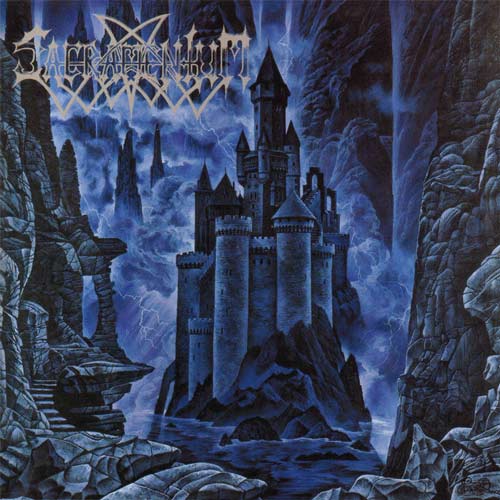 Wasting absolutely no time with extraneous intro tracks or cod-atmospheric openings, the band’s legendary debut kicks into high gear straight away with the high-velocity blasting and icy, scything riffage of “Fog’s Kiss”, which not only introduces you to the scathing snarl and ominous, semi-clean intonations of vocalist Nisse Karlén, but also immediately showcases just how good this band were as songwriters, even at the earliest stages of their career, switching seamlessly between full-force ferocity and moody melodic grooves, all tinged with a certain underlying proginess that makes the track stand out straight away.

Of course the comparisons with Dissection are impossible to ignore, what with the two bands operating in a very similar musical sphere, but it’s not had to pick out the key differences between the two, particularly when it comes to the intense yet intricate drumming Nicklas Rudolfsson, who frequently balances out his bombastic blasts and rolling kicks with an array of unexpectedly creative and catchy percussive patterns.

The title track is a veritable masterclass in focused metallic power, all drenched in dark harmonies and majestic melody, while “Blood Shall be Spilled” is as punishingly aggressive as it is prodigiously infectious, particularly when it moves into its epic finale.

“When Night Surrounds Me” goes for a heavier, slightly groovier, approach, and also features some truly wicked drum work from Rudolfsson, who accents every insidious riff change by Brolycke and Karlén with a similarly smooth transition of his own, after which the outstanding “Cries From A Restless Soul” finds the whole band coming together as one to unleash a blizzard of blackened metallic fury, intercut with moments of surprisingly poignant, introspective melody, and concluding with a heroically harmonised finale.

And while “Obsolete Tears” is another pull-no-punches blastmonster, “Beyond All Horizons” takes a much more measured approach, telling an impressively creative musical story of light and shade, ebb and flow, over the course of six-and-a-half sublime metallic minutes.

Concluding with the fittingly ferocious strains of “The Vision and the Voice” and the eerie instrumental outro of “Darkness Falls For Me”, Far Away From the Sun is one of those albums which not only served to put its creators on the musical map, but whose impact and influence can still be felt even today. 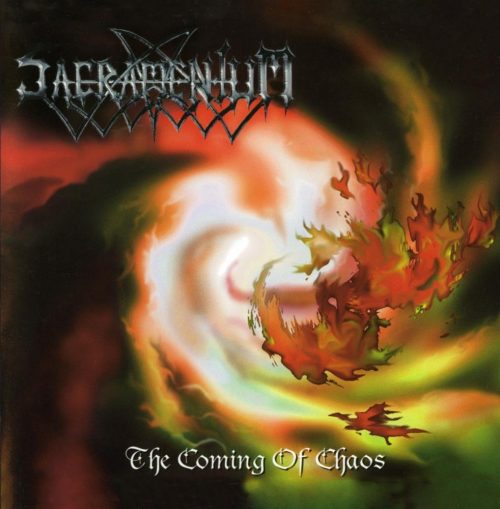 With The Coming of Chaos the band had clearly taken some steps to tighten things up even further, as well as beef up their production, resulting in an altogether harder-edged guitar tone which, while sacrificing some of the pure iciness of their debut, definitely serves to enhance the sheer riffosity of their second album.

This is immediately obvious on the hellishly hooky “Dreamdeath”, whose rapid-fire riffs and cruelly catchy melodies make for one heck of an opener. The band keep the momentum going by rolling right into the irresistibly headbangable rhythms, surprisingly technical fretwork, and shamelessly infectious chorus of “As Obsidian” – whose underlying thrashiness recalls a more blackened take on At The Gates in places – and the winding tremolo lines and whirling blastbeats of “Awaken Chaos”, a song which harkens back much more strongly to the frigid ferocity of their debut.

Speaking of ferocity… “Burning Lust” is probably the single most aggressive and intense song the band had produced thus far, largely in part due to Rudolfsson’s increasingly vicious drum work, though the choppy, scything riffs spilling from Anders Brolycke’s guitar probably don’t hurt either. It’s not a simple one-note blast-frenzy though, as there are some moments of brutally catchy rhythmic riffage and sinister melody (not to mention a few orgasmic moans) in there too, which help break up the song’s vicious assault on the senses into much more manageable chunks.

And while the pseudo-instrumental interlude of “Abyss of Time” is a largely throwaway affair, the tornado of terror that is “Portal of Blood” (complete with some brilliantly nasty and nimble fretwork) and the thrashy, blackened Melodeath rampage of “Black Destiny” are anything but, with the latter in particular featuring some truly killer riffage over the course of its four-and-a-half fiery minutes.

“To the Sound of Storms” is, in my opinion at least, the album’s real climax, as the title track turns out to be two minutes of actual music, followed by another eleven of brickwalled feedback and unsettling noise that gets old very quickly. Thankfully “…Storms” is an absolute barnburner of lightning-fast riffs, explosive drums, and twisting, barbed-wire tremolo melodies, which largely softens the blow of the rather underwhelming final track which follows it, and which continues to showcase just how good (not to mention seminal) Sacramentum’s brand of mercilessly melodic Black Metal really was. 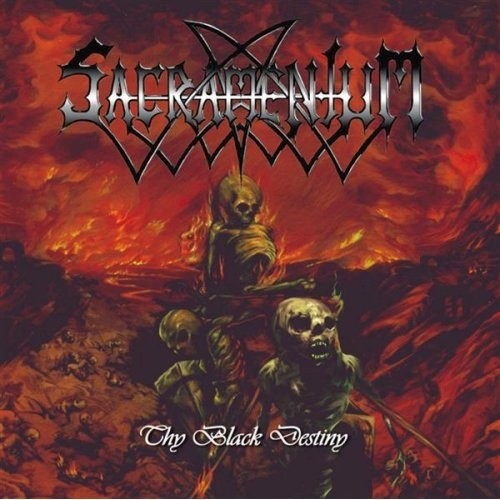 The band’s third album would, ultimately, prove to be their swansong, but what a way to go out it would prove to be, introducing a heavier Death Metal element to the band’s sound (one not dissimilar to what God Dethroned were doing at the time) along with an even heftier, heavier production job.

Following the warlike introduction of “Iron Winds”, the pulverising strains of “The Manifestation” are the listener’s first exposure to this even more bloodthirsty version of Sacramentum, delivering three-and-a-half minutes of finger-shredding Death/Thrash riffage interspersed with venomous threads of the band’s signature melodic menace, after which the chunky, chugger guitars and effortlessly evil leads of “Shun the Light” move in to quickly mop up any remaining resistance.

“Demonaeon” incorporates a healthy amount of chilling melody which recalls the band’s earliest works, while also showcasing a much beefier guitar tone (and bass tone). Together with Rudolfsson’s crushing performance behind the kit, that helps makes the track one of the band’s heaviest cuts, while the slower, more rhythmic stomp of “Overlord” allows both Brolycke and new guitarist Niclas Andersson to cut loose with some attention-grabbing leads and harmonies.

“Death Obsession” is, fittingly enough, probably the band’s most Death Metal song yet, which finds them switching back and forth between scorching blasts and churning chugs, whilst also incorporating a fair bit of suitably evil melody along the way. That is followed in turn by the absolutely visceral “Spiritual Winter” (which is, in part, reminiscent of early At The Gates) and the ravenously thrashy assault of “Rapturus Paradise (Peccata Mortali)”, which together make for one impressively brutal triple-header of tracks.

The concluding pairing of “Weave of Illusion” and “Thy Black Destiny” ultimately serve as not only the album’s finale, but the final statement from the band themselves, and while the former sounds oddly un-like Sacramentum for the most part, the subdued, sombre leads strewn throughout the latter’s doomy death-march help make it a fitting epitaph for a band whose name rightfully deserves to be held up right alongside some of the genre’s very best, and most defining, acts.

One Response to “THE SYNN REPORT (PART 95):  SACRAMENTUM”