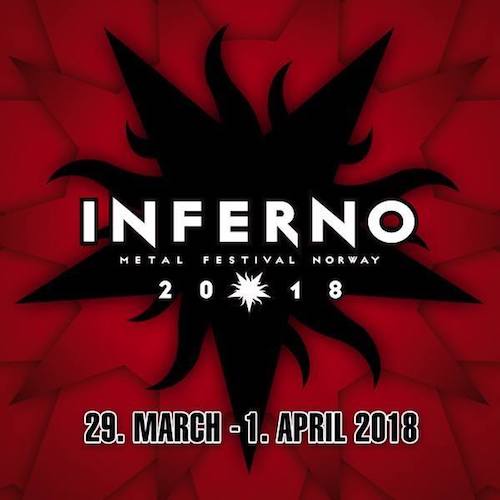 (Andy Synn was fortunate to be in attendance at the 2018 edition of Inferno Festival in Oslo on March 29 – April 1, and files this report, which will be spread out in installments over the balance of this week. Day 2 is the focus of this post; reactions to Day 1 can be found here.)

Day two of Inferno began with… me sleeping in. And damn, did it feel good.

It also meant that, after grabbing some food, doing some writing for NCS, and checking my work emails, I was nice and rested and ready to hit the festival good and early, even getting there with enough time to have a bit of a wander around the (admittedly quite limited) array of merch stalls on offer, where I picked up a copy of Drottnar’s second album Stratum and browsed a bunch of truly terrible band shirts, before grabbing a cool spot from which to watch the opening band, Swedish occult artists Mephorash. 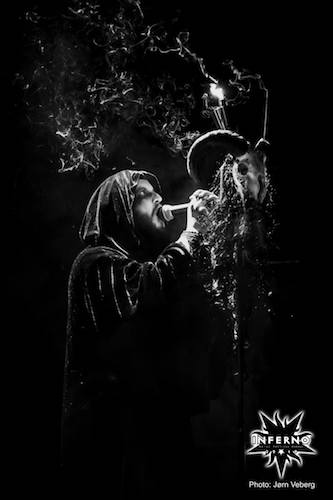 I’m sure we’re all well aware that there are certain bands out there whose music is best suited to smaller, more intimate venues, and for whom the transfer to a bigger stage simply doesn’t work. In fact I tend to find this is true of the majority of Metal bands, where the added atmosphere engendered by close proximity and humongous volume fits the genre like a velvet glove.

However, there are definitely some bands who thrive on a bigger stage, and Mephorash’s performance here marked them out as one of them.

With two vocalists, two guitarists, a bassist, drummer, and numerous candles, icons, and bundles of burning incense, all sharing the same stage, I can’t imagine how the band would have fit themselves into the smaller of the festival’s two venues, nor do I think that massive opener “Riphyon – The Tree of Assiyah Putrescent” would have been as effective in the relative confines of John Dee, as every hammering rhythm, crackling riff, and ominous, chanted vocal, seemed to bloom and expand to fill every nook and cranny of Rockefeller.

I must admit, I was feeling quite a bit of trepidation before the band’s set, as I wasn’t sure how the depth and scope of their sound would work in the live setting, but thankfully it turned out to be a stupendous performance, filled with surprising revelations (the almost Sabbath-esque undercurrents to the band’s music were something I had never really picked out before) and a devilish array of demonic hooks. 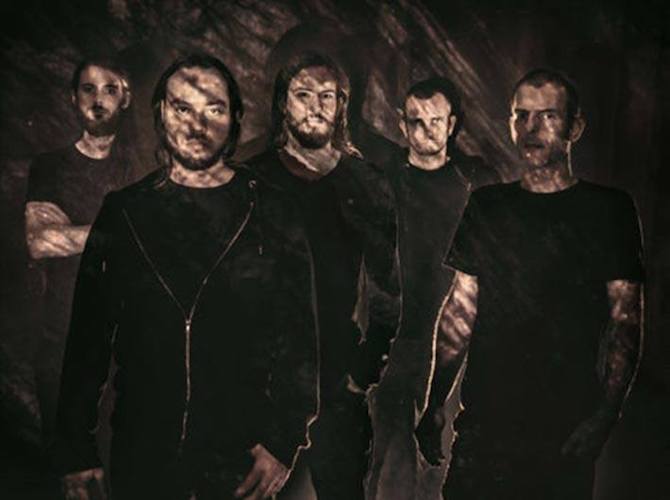 In contrast to the indulgent, expansive approach taken by the previous band, Ulsect’s set was a much more straightforward kick in the proverbial teeth, which brought some of the group’s more Hardcore roots to the forefront.

As incredibly energetic and pneumatically heavy as their set was, however, it lacked some of the “wow-factor” which characterised the performance the day before by Dodecahedron (with whom the band share members, as well as a penchant for dissonant aggression), meaning that while it definitely left you feeling a little bruised, it didn’t quite hit hard enough to leave a truly lasting mark. 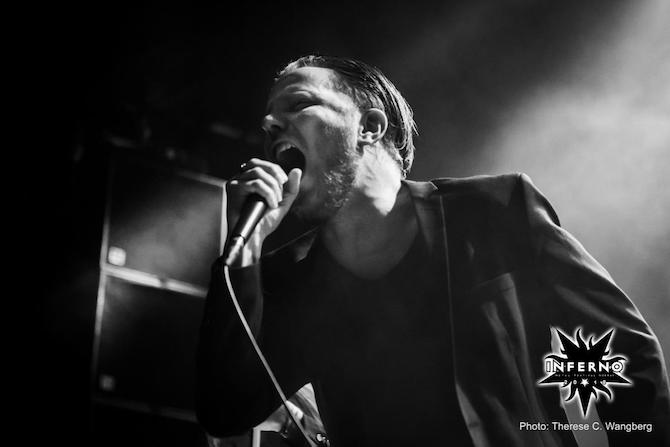 Back on the main stage blackened Icelandic artistes Auðn – resplendent in their black suits and black t-shirts anti-image – then proceeded to treat the assembled crowd to a coolly competent set of intricate, ice-clad melodies and rolling, textured blastbeats which was heavy on atmosphere, but a little light on truly memorable moments. That being said, although the band may not be doing anything particularly unique or revolutionary, they do what they do very well indeed, and perform with a certain introverted charisma that’s difficult to fake. 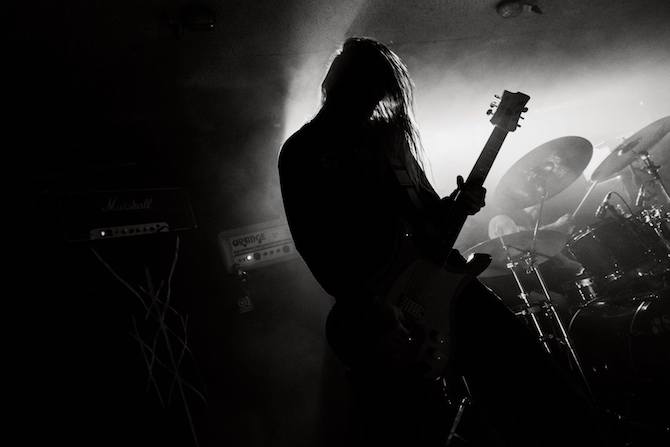 Belgian Black Metallers Wiegedood, however, had no such trouble grabbing their audience’s attention, as every one of their tracks was brimming with more brimstone hooks than hell’s own abattoir, and driven by an unrelenting engine of pure fury.

Beginning with a storming rendition of “Swanesang”, and concluding with a similarly visceral run-through of “Onder Gaan”, the three-piece gamely battled their way through a series of technical faults to deliver one of the night’s most primal and punishing sets, reinforcing their status as one of the best “new” Black Metal bands of the past few years. 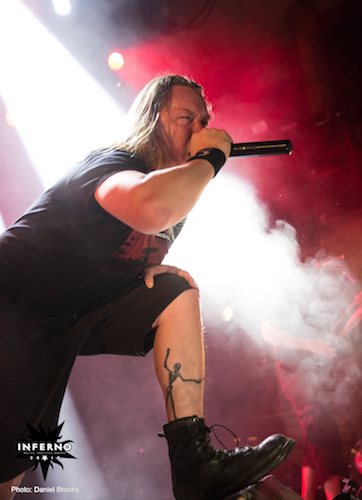 If nothing else, Origin vocalist Jason Keyser should win an award for most cheerful frontman of the entire festival, bouncing around the stage and spewing his endearing patter (such as claiming that his twelve-year-old self would have been ecstatic to learn he’d one day be supporting Emperor) with all the energy and enthusiasm of a man clearly having the time of his life (although his assertion that Origin and Obituary were the festival’s only Death Metal acts was a hideously glaring mistake).

Easily the most overtly technical band of the entire festival, the quartet delivered a set of pinpoint-precision brutality, culling tracks from the length and breadth of their back-catalogue (albeit with a heavy focus on both Omnipresent and last year’s Unparalleled Universe), with drummer John Longstreth unleashing his semi-robotic fury behind the kit, while guitarist Paul Ryan and (extremely underrated) bassist Mike Flores twisted and mangled their fretting fingers into ever more complex and contorted shapes.

Yes, the middle part of their set fell into a bit of a repetitive rut for a song or two, but you can’t argue with the final results, which saw the band leaving the stage to some frankly rather rapturous applause.

Knowing that I needed to grab myself a prime position from which to watch Emperor I elected to stick around in Rockefeller, and planted myself firmly in an elevated position just to the right of the stage from where I knew I would have a perfect vantage point from which to observe the return of the black wizards.

And it’s a good thing I did, because the place was (predictably) packed by the time the curtains were drawn back and the opening bars of “Alsvartr” began to ring out from the PA.

Playing the entirety of Anthems to the Welkin at Dusk (the highlight of which was a stunning rendition of “The Loss and Curse of Reverence”) plus a selection of choice cuts from IX Equilibrium (“Curse You All Men!”) and In The Nightside Eclipse (“The Majesty of the Nightsky”, “I Am The Black Wizards”, “Inno A Satana”), the imperial trio (accompanied tonight by Secthdamon of Myrkskog on bass, plus a keyboard player who I didn’t recognise) put on one hell of a show, more than living up to their legend in the process and reminding everyone just why their music is held in such high regard (and always will be). 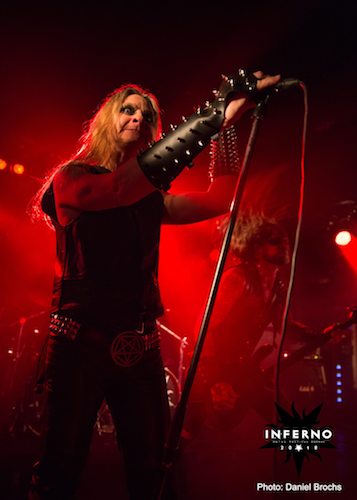 Of course, as highly anticipated at the previous band were, Necrophobic were the biggest draw of the day for me, and they did not disappoint, hammering their way through an eye-popping array of evil anthems drawn from across their extensive back-catalogue, running the gamut from the band’s debut album, The Nocturnal Silence (“Before the Dawn”, a climactic “The Nocturnal Silence”) to their most recent masterwork, Mark of the Necrogram (“Mark of the Necrogram”, “Pesta”, a bombastic “Tsar Bomba”), and (almost) everything in between.

Clearly on top form, and just as clearly in high spirits, the Satanic Swedes (whose current line-up is probably one of the strongest they’ve ever had) delivered the sort of performance that a band half their age would have been hard-pressed to match in terms of sheer venom and vitality and which, blasphemous though this may sound, I thought even outdid their Norwegian brethren who played before them!

Now, the last band of the evening was Fleshgod Apocalypse, about whom much digital ink has been spilled both here at NCS and across the rest of the infosphere. And while a lot has been said (and written) about the band’s propensity to brickwall the sound on their albums into dynamic oblivion, up until this point I didn’t think it was possible to do the same thing live…

Unfortunately, the band (or their sound guy) somehow managed it, with the obnoxiously overpowered drums frequently threatening to completely drown out the rest of the instruments, all of which seemed to be engaged in a constant quest to one-up each other in volume, to the point where the more technical and melodic elements of the group’s sound never stood a chance, reducing the guitars to mere chugs, burying the bass completely, and causing the symphonic keyboard embellishments to lurch back and forth between inaudibility and tinnitus-inducing volume.

Truthfully, I felt like the whole thing did the band such little justice that, after putting up with as much as I possibly could, I decided that discretion was the better part of valour, and retreated from the venue in order to save my eardrums to fight another day.

Still, while Fleshgod’s set may have been a bit of a disappointment, the chance to see Emperor and Necrophobic back-to-back made tonight a very special one indeed, and day three looked set to be just as good… so tune in tomorrow, same time, same channel, to hear about that!